The best Shine for the 100-coin one in Gelato Beach is probably Episode 8. When you begin, turn around and look for the island with three big trees on it. There are four coins on top of each of the trees, so that will be twelve coins there (12). Drop down to the swing and use the spray to push yourself back to collect the five coins behind you (17). Head to the main part of the beach and you will find a bunch of Red Cataquacks. These enemies will launch you up into the air if you get close enough, but spray them with water and jump on them to get a coin; there’s a total of 26 Red Cataquacks in the level (43).

It’s time to find the watermelons for the contest now, but you’re not looking for the biggest one this time. One can be found next to the Sand Cabana, and another near the Surf Cabana on the other side of the beach. Popping the watermelons will give you a coin and you can do this up to a total of ten times for ten coins each. So, taking those smaller two into account, as well as the largest one, you can get thirty coins from popping the watermelons. All you have to do is push them up against a wall (73). Additionally, if you deliver the two smaller watermelons to the judge at the big cabana, then you will get ten coins for each of them. The only problem is that the Pianta just throws the coins all over, so you might not get all of them before they disappear (93). 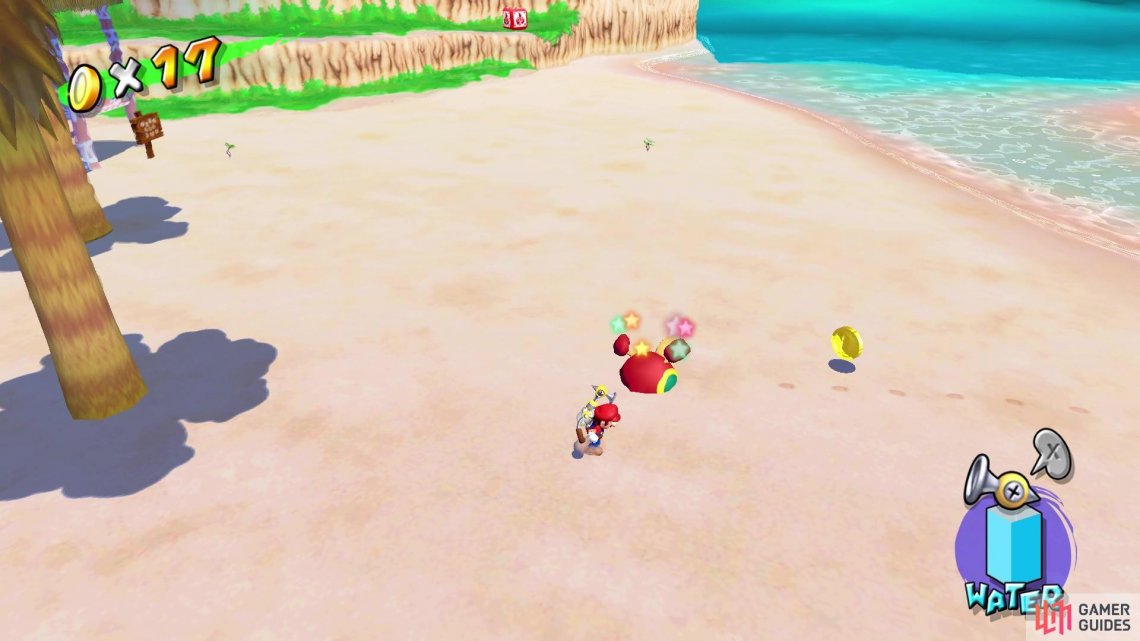 Return to the cabana near the beginning of the stage and there are four coins underneath the ceiling (97). Head to the upper part with the Cataquacks and go to the edge right behind the beginning cabana. There is a ledge you can hover to that has the Rocket Nozzle box that unlocks it for the rest of the level, but there’s also six coins on this ledge (103). If you still need anymore coins, don the Rocket Nozzle and look for the shack by the mirrors. Get on top and launch yourself straight in the air at the middle to collect eight coins (111). The Shine will spawn in a pretty easy area to find, so there’s no need to point it out.