To get to this course, you will need to clear Bowser in the Fire Sea in the basement of the castle to get a key that opens the door in the main lobby. Go up the stairs to the next floor and look for the door that is flush with the wall, as that will lead you to the paintings for Tiny-Huge Island. Yes, paintings (plural) was said there, as there are two entry points for this course. The one across the door is nothing, but the two paintings on either side will dictate how you begin this course. 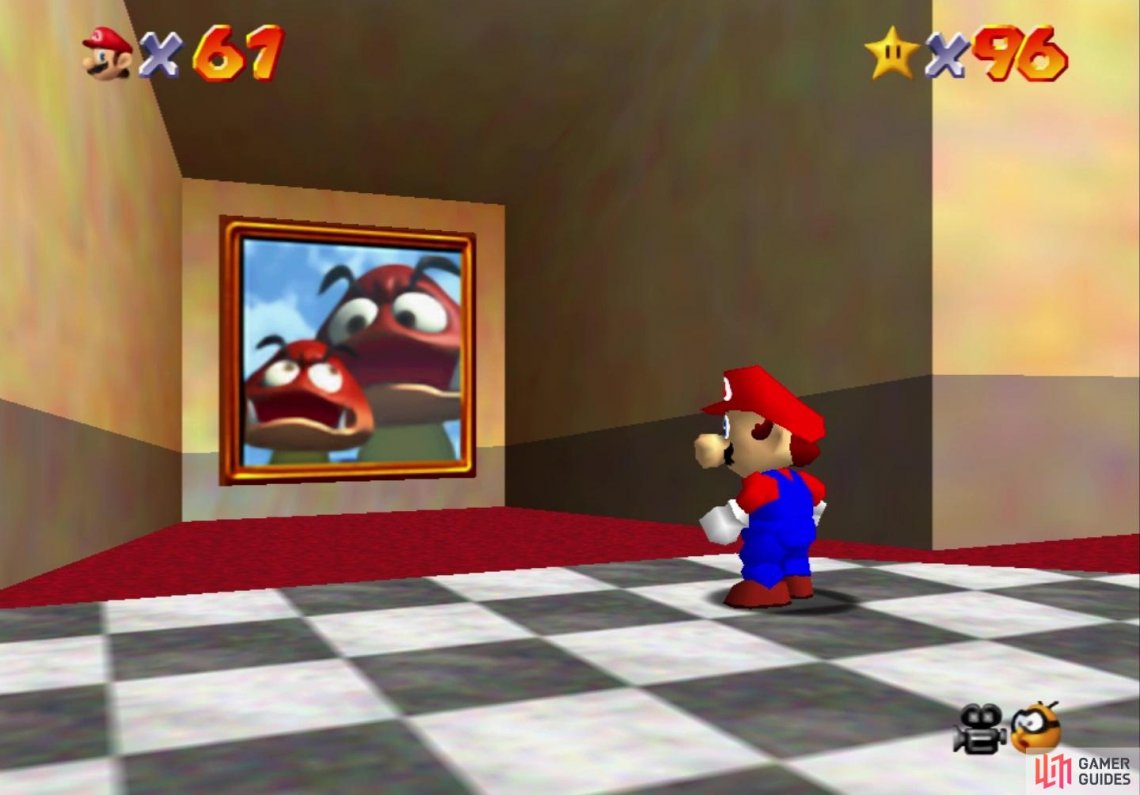 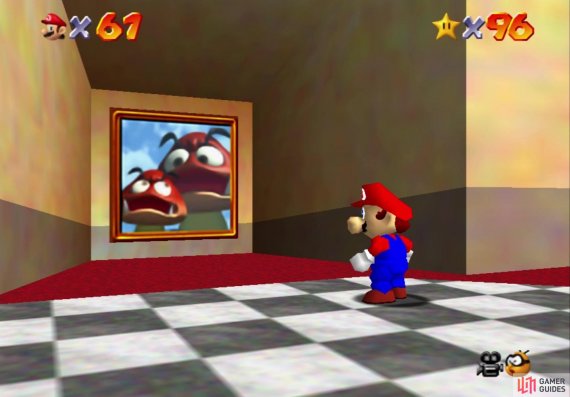 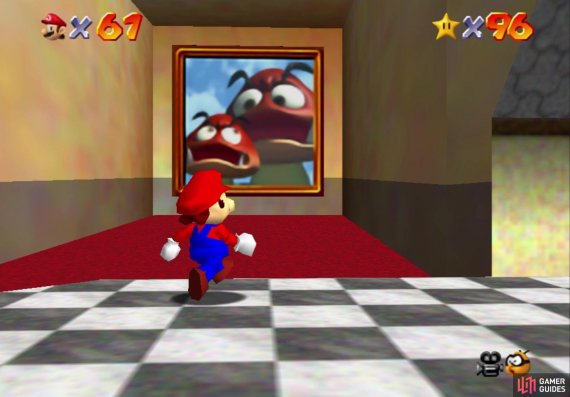 Although they look the same distance at a glance (left), each painting will allow you to enter their respective islands (right)

Although the paintings on the sides look to be the same distance, they are definitely deceptive. While facing the normal painting that isn’t a portal, the one to your left leads to the course with Mario being giant, while the one to your right leads to Mario being tiny. You’re not stuck in the course as either size, though, as there are pipes throughout the place that will reverse Mario’s stature. Apart from the sizes of things, both instances of the course are pretty much the same. You will begin in the same area, no matter your size, and there aren’t too many differences between the two.

When you begin, you will be placed in a small area next to a stone wall, which has a doorway in it, as well as water on the one side. There will be three Grand Goombas near you, which are oversized versions of normal Goombas. The waters nearby will be inhabited by a Bubba, a giant fish that will attempt to swallow Mario whole when he’s small. There are two other landmasses in this initial area, but it’s impossible to reach them from this side, so you will have to drop down from above in order to reach them, or access them from Tiny Island. For now, head through the doorway and into a larger area with more water.

There is a small island in the center of this area that doesn’t really have anything but a wooden post on it. Beyond that island, there will be another Bubba, so be mindful of it. Also in this area will be a large slope that will contain a Koopa Troopa, plus you will have to contend with an enemy Lakitu that tosses Spinies down at you, as well as a Fly Guy. On the opposite end from where you entered, there will be more land, where you will find the cannon, as well as a few more enemies. Long Jump to the next platform, where some wind will begin blowing. 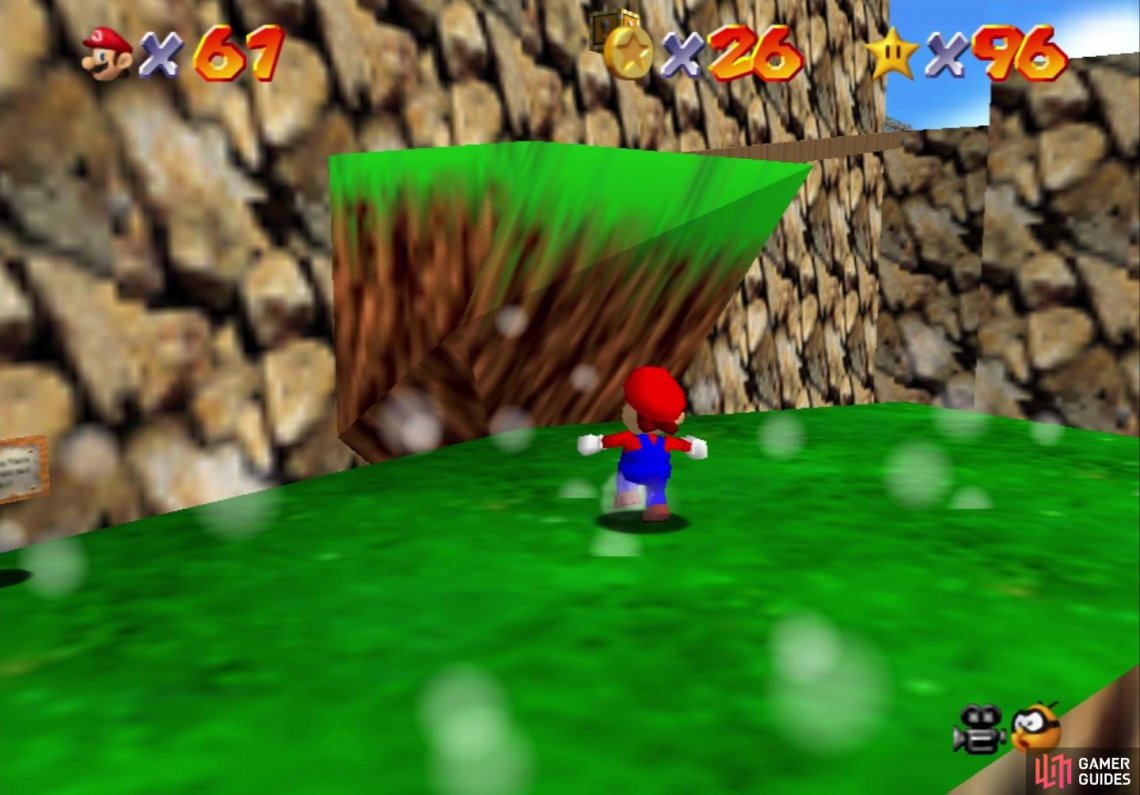 (1 of 2) Getting to this upper ledge can be tricky 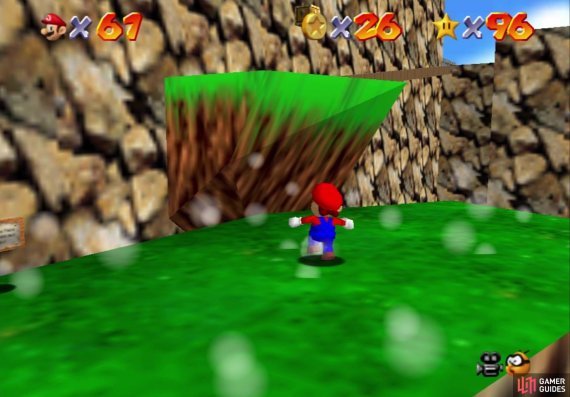 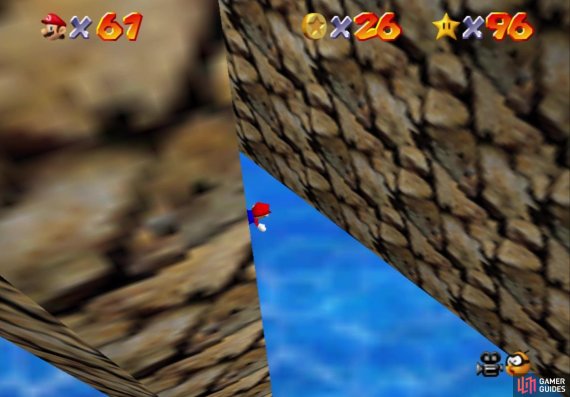 Getting to this upper ledge can be tricky (left), and you might lose a few lives getting it right (right)

The higher platform can be a bit tricky to get to, as the wind is constantly trying to push you off the edge. You will want to Triple Jump to attempt to get to it, but if you get close enough, then an updraft should push you onto it. Shimmy along the thing wooden pathway to the next area, where you will happen upon one of those pipes that changes Mario’s size. Ignore it for now and carry on across the wooden plank, keeping in mind that there’s more wind here. The next section will have Big Steelies rolling down it, so avoid them and jump up to find the source of the Big Steelies.

Back outside and returning to before dropping down, if you continue upwards, you will come across a yellow block that contains a star. At the very top of the mountain is a pool of water, with a hole in it. You will need to come here as Giant Mario, Ground Pound the water, then return with Tiny Mario to go inside it, where you will find the mini-boss, Wiggler. Backtracking for one final time, right where the Big Steelies make the turn and roll down the hill, you can drop down to the lower area near the start, with the grassy platform housing some giant Piranha Plants. 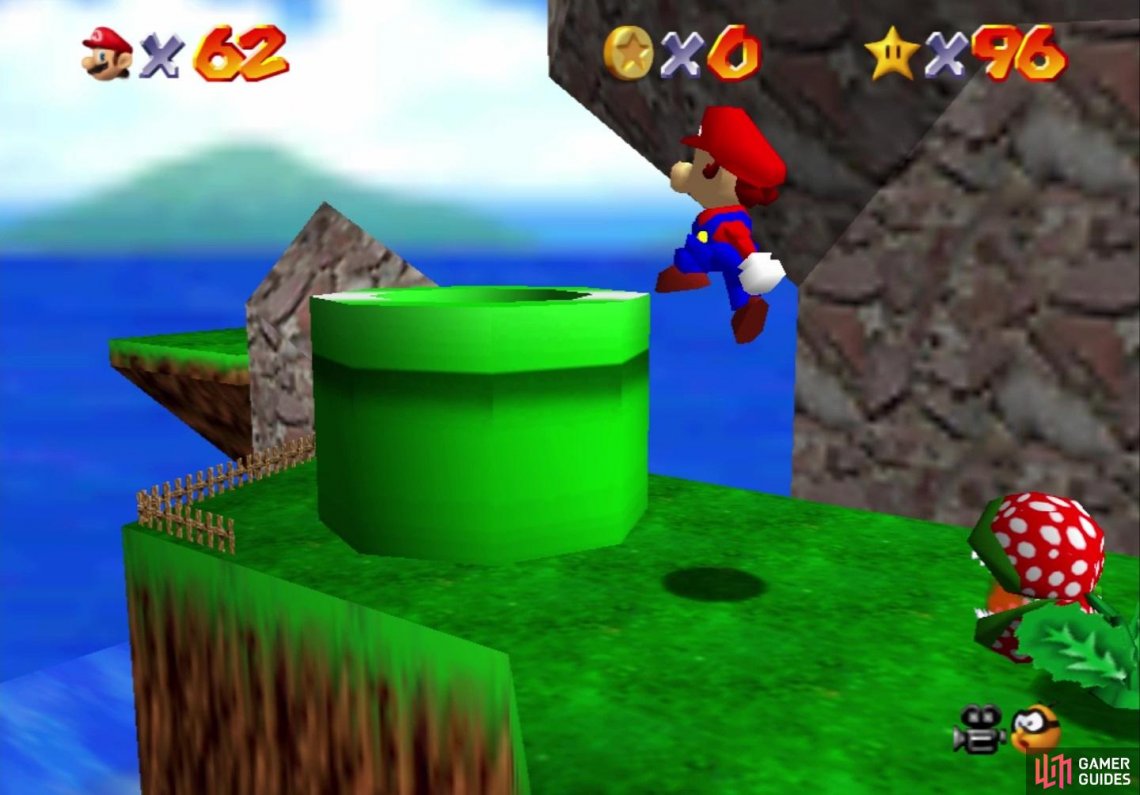 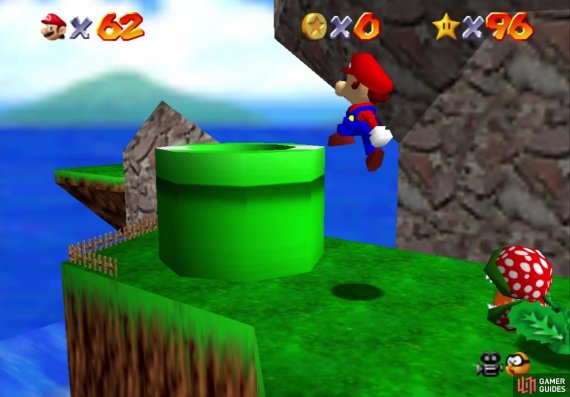 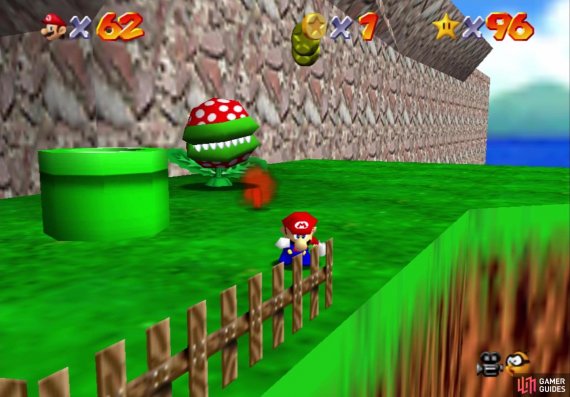 The various pipes allow you to go from one island to the other (left), making it easier to get around the course (right)

The general layout of the land is pretty much the same as Huge Island, although there may be some differences with the enemies and a few other things added. You will start out in the same area as Huge Island, except there will be a Micro Goomba here. Long Jump to the platform to the left, where there’s a Keronpa Ball and a yellow box containing a 1-Up. The platform a little further will have a pipe that shrinks Mario and if you head over the edge behind it, there will be a purple switch. This creates blocks that can be helpful in reaching the path the Big Steelies come down, as well as a floating island that will house a star under certain conditions.

However you get out of the first area, you should be close to the hole spitting out Big Steelies. If you go in the direction where Koopa the Quick will appear, you will be able to drop down into the main area of the course. There’s really not much here, but if you continue to the cannon, you will find the Bob-Omb Buddy there. The only other really big difference between the two courses is at the very top of the mountain. If you head up there as Giant Mario, you can perform a Ground Pound that will drain the little pool. Find a pipe to go back as Tiny Mario and you will be able to enter the hole, allowing you to going inside and fight the Wiggler. 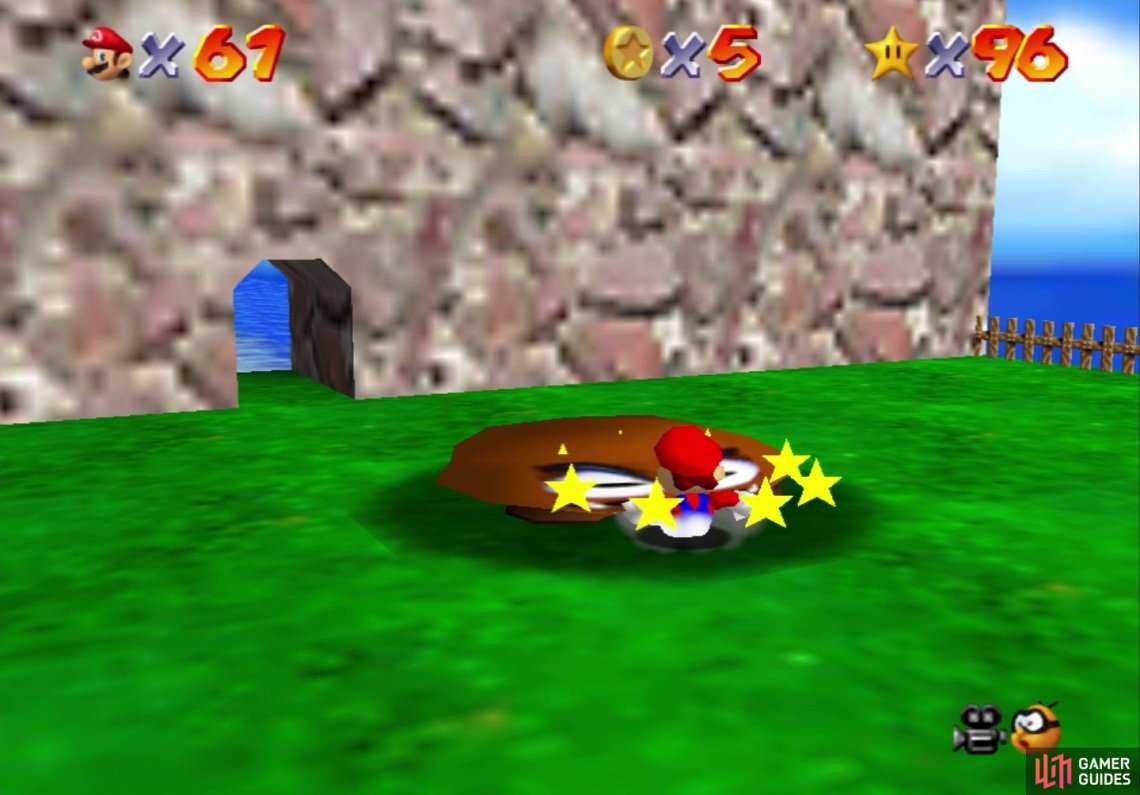 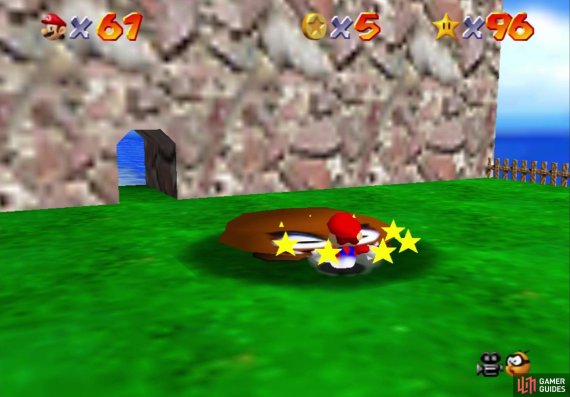 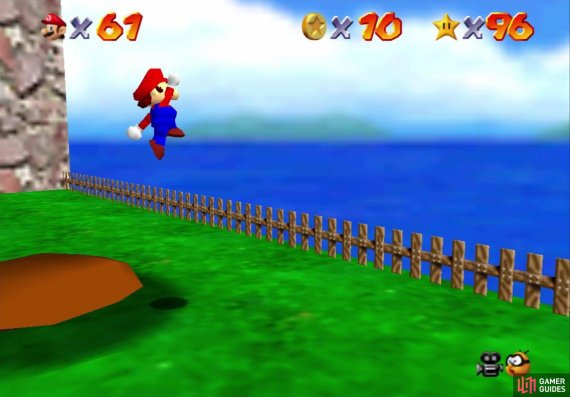 Ground Pounding the Grand Goombas will yield a Blue Coin (left), while a normal jump will only get you a single yellow coin (right) 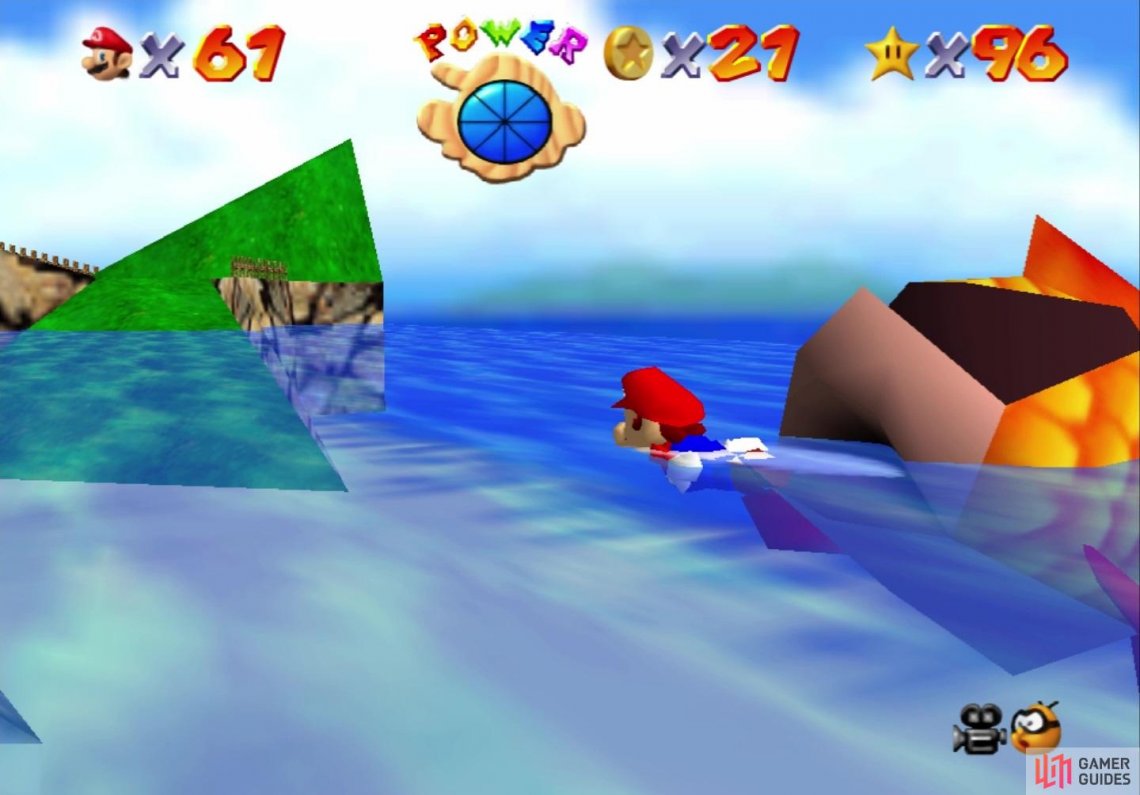 The Bubba will attempt to swallow Mario whole