Beware of the Bouldergeist is the boss level of Ghostly Galaxy in the Kitchen dome.

Make Your Way to the Mansion¶

Once again, you’ll need to use the Launch Star on the Toad Spaceship to take you to the Mansion Grounds. This time, you’ll find lots of Bats and Spranglers, which are spooky spiders. Defeat them or avoid them and head down the path towards the mansion.

Inside the mansion, you’ll be introduced to a new enemy: Bomb Boo. You can press Y to grab it and spin it into objects to explode it. There are lots of stone statues in this room that you can practice spinning the Bomb Boos into, but the statue you need to explode is the one in the fire place. You’ll then be able to use the Launch Star in the fireplace to travel to the next area. 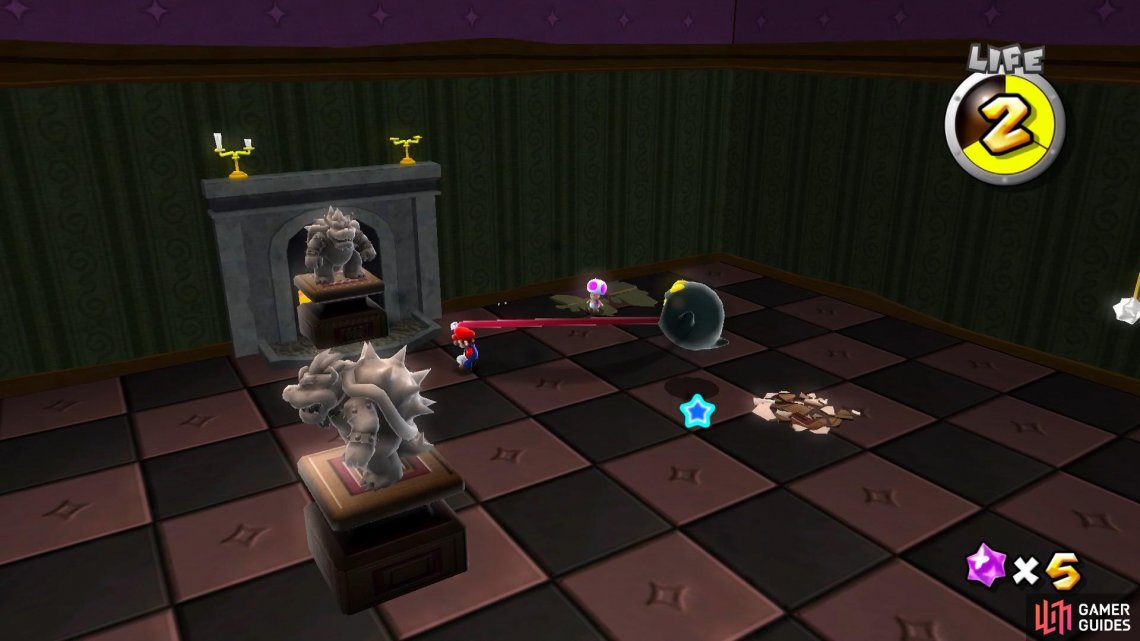 Swing the Bomb Boo into the Statue in the fireplace. 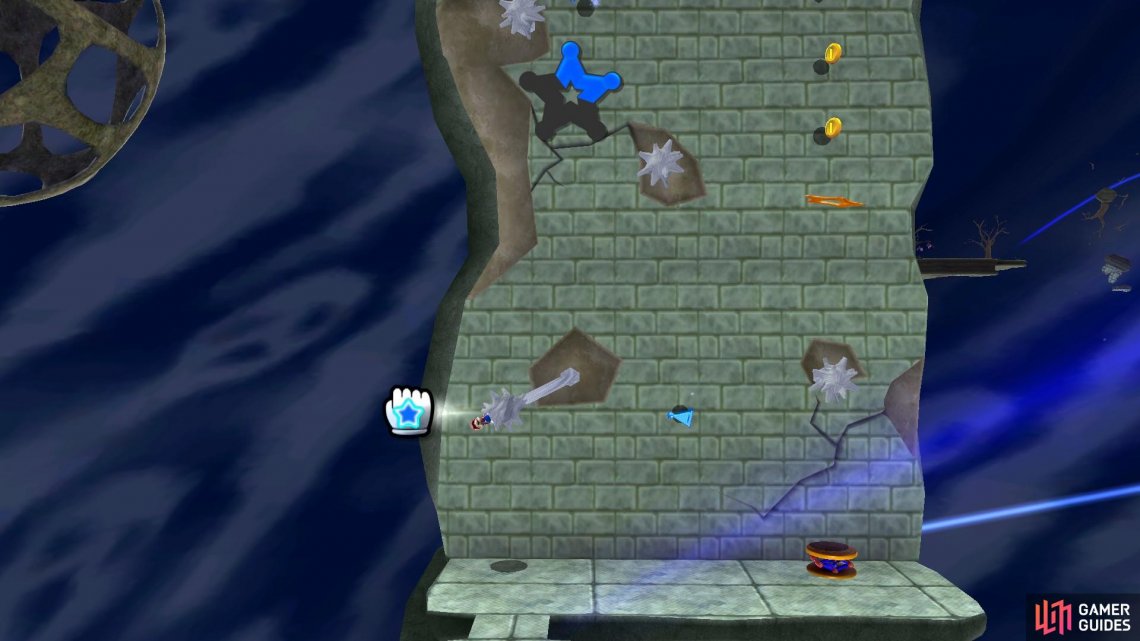 Use the slingpods to grab all the Pull Star chips.

This planet consists of an exterior holey layer and an inner bouncy ball core. Drop down onto the Bouncy Ball and grab the 1-up Mushroom. Then wait for the holey exterior to align and jump on the Ball to jump into the Launch Star that’ll take you to the final boss area. Make sure you watch out for the Floating Mines! 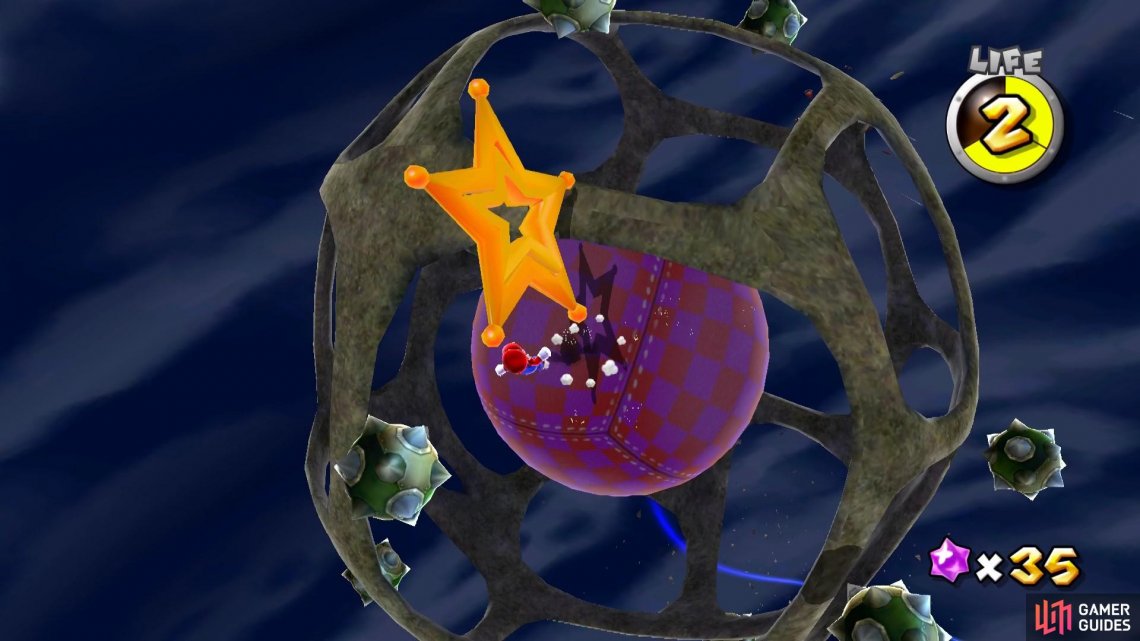 The bouncy ball is very…bouncy?

When you land on the new planet, you’ll have the option to buy an Extra Life Mushroom or a 1-up Mushroom from the Luma, for 30 Star Bits.

The Bouldergeist will throw lots of boulders at you, including black boulders that turn into Bomb Boos and golden boulders that smash into golden coins to give you extra hp. He will also occasionally cause stalagmites to grow out of the ground, so watch out you’re not standing on those or you’ll take some damage!

You’ll need to grab the Bomb Boos and spin them into the Bouldergeist. Damage him three times and you’ll destroy his rocky exterior. When you damage his weak ghost body, you will trigger his next phase. In the next phase, he will create giant rock arms for himself. He will use them to punch and flatten you so watch out! You’ll need to spin Bomb Boos into his body to damage him permanently. If you spin them into his arms, they will be destroyed but only temporarily as he’ll recreate them and he won’t take permanent damage. Spin Bomb Boos at his body three times to reveal his ghost form and then throw a final Bomb Boo at him to defeat him for good and grab the Power Star! 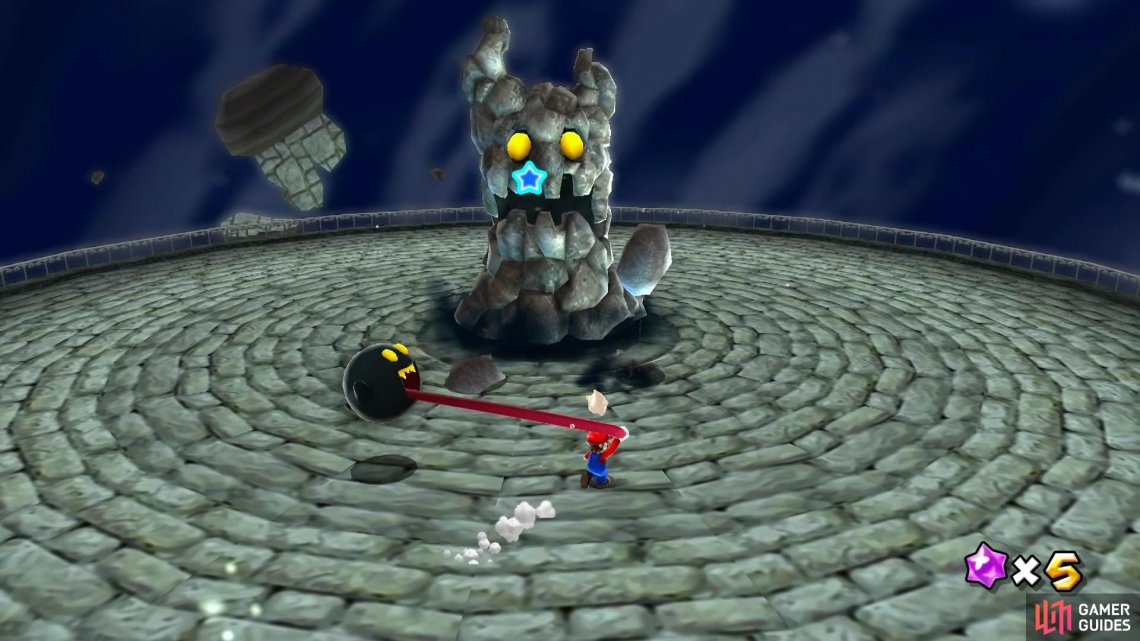 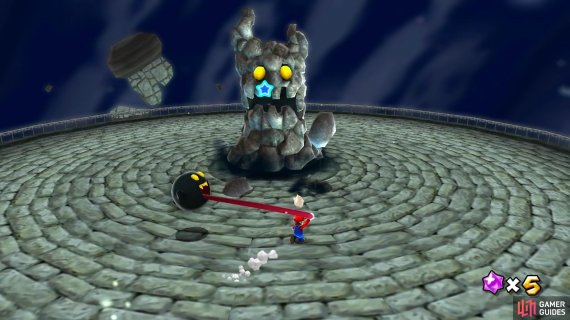 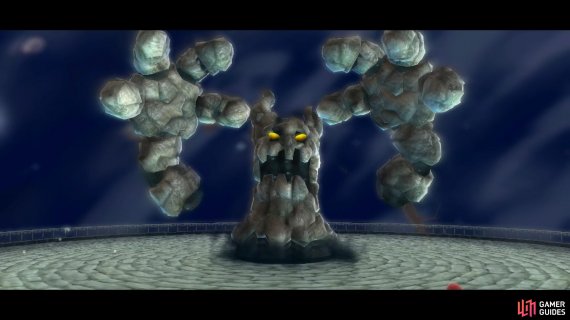 Smash Bomb Boos into the Bouldergeist to break down its rocky armor (left), second phase Bouldergeist has big arms and hands! (right)