The following Blue Coins described are all accessible in Episode 8.

There are four spots on the beach, in which you can spray and uncover a Shine symbol. Each of these spots, when fully revealed, will yield a Blue Coin. The best thing to do is just spray wildly until you see the effect of something getting hit. One is by the Sand Cabana (the one with the fruits), another halfway between the same building and the peninsula, a third on the peninsula (cannot do this during the first episode), and the last one near the Surf Cabana (the building on the far side).

On opposite sides of the beach, there are two pieces of triangular-shaped graffiti on the cliffside wall. One is by the beginning of the level, while the other is behind the watermelon closest to the Surf Cabana. If you know how to “water surf,” then you should have no problem in reaching them. The Turbo Nozzle to unlock it for this level is located on a ledge by the mirrors and Shine Tower, which can be reached by hovering from a nearby tree or mirror. 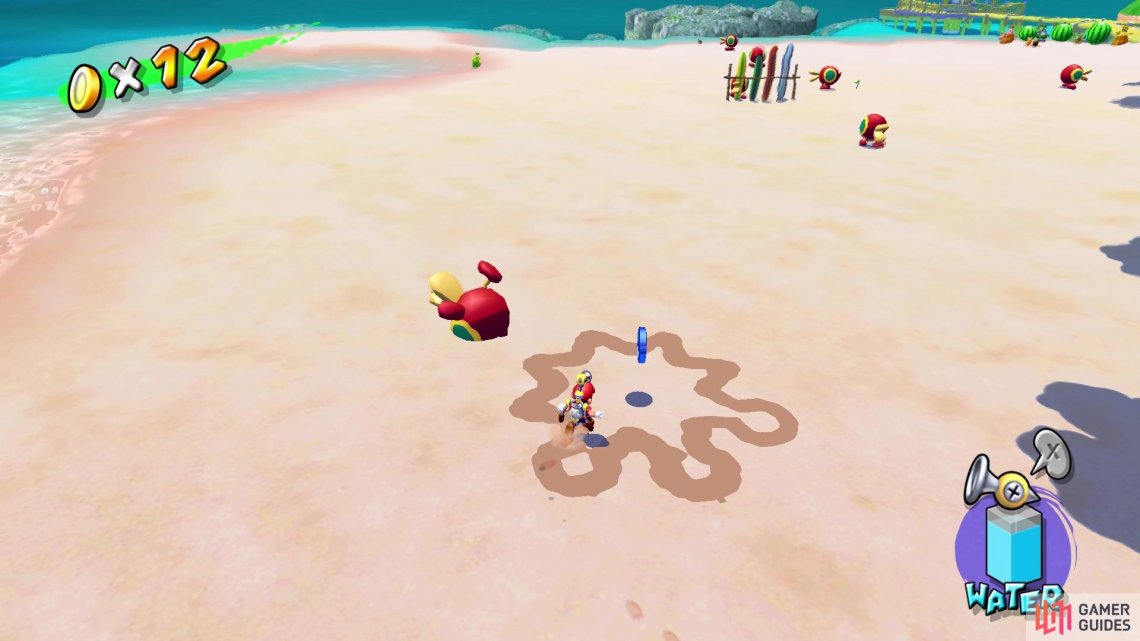 Grab a Rocket Nozzle and head to the upper area with the Cataquacks. Look for the little structure that has a beehive underneath it and get on top of it. While standing on the roof of the structure, launch yourself straight up from the center to nab a Blue Coin.

Head to the top of the level, where the large watermelon is for Episode 8. There are a lot of tightropes running across that are connected to poles. Look at the tightrope above the watermelon and you should notice two blue birds. Spray these two blue birds to get these Blue Coins. Instead of chasing after them, you can stay still and let them return to the ropes before spraying them again.

While still in the same area as the previous coins, head down the path that leads towards the Surf Cabana and you shoule notice a little piece of land that has a gap in it. Drop down to it and in that gap will be a Blue Coin.

You will need the Rocket Nozzle for this coin. After collecting the previous Blue Coin, wall jump up to the isolated ledge above it. There will be two tightropes connected to the pole here, so get on the lower of the two. You will need to jump and as you’re doing so, get a rocket off to another rope above the one you’re on. If you don’t do it right, then Mario will spin around on the tightrope, but you can continually press Y until he stops. While on this higher rope, go to the nearby pole and do the same thing to get to the next higher one, but it might be tough to aim for the rope. Continue doing this until you get to the highest rope, where you can bounce off of it to get the Blue Coin.

This coin can be found on top of a pole near the largest watermelon. The easiest way of getting this coin is with the Rocket Nozzle. Stand near the base of the pole, charge a rocket jump and jump normally right before it goes off, which should give you enough height to grab onto the edge of the pole. If this doesn’t work, get to the higher ropes as described in the previous coin, then slowly work your way over to the coin.

Head on over to the Surf Cabana, which is the larger of the two buildings on the beach. Swim underneath the building and there will be a spot populated with coins, one of which will be a Blue Coin.

Go to the Sand Cabana, the building near the beginning of the level, and grab any fruit off of the table in there. With the fruit in hand, take the journey over to the Surf Cabana (the other building) and jump onto the roof with the fruit. Stand close to the blades and drop the fruit into the blender to get a Blue Coin. 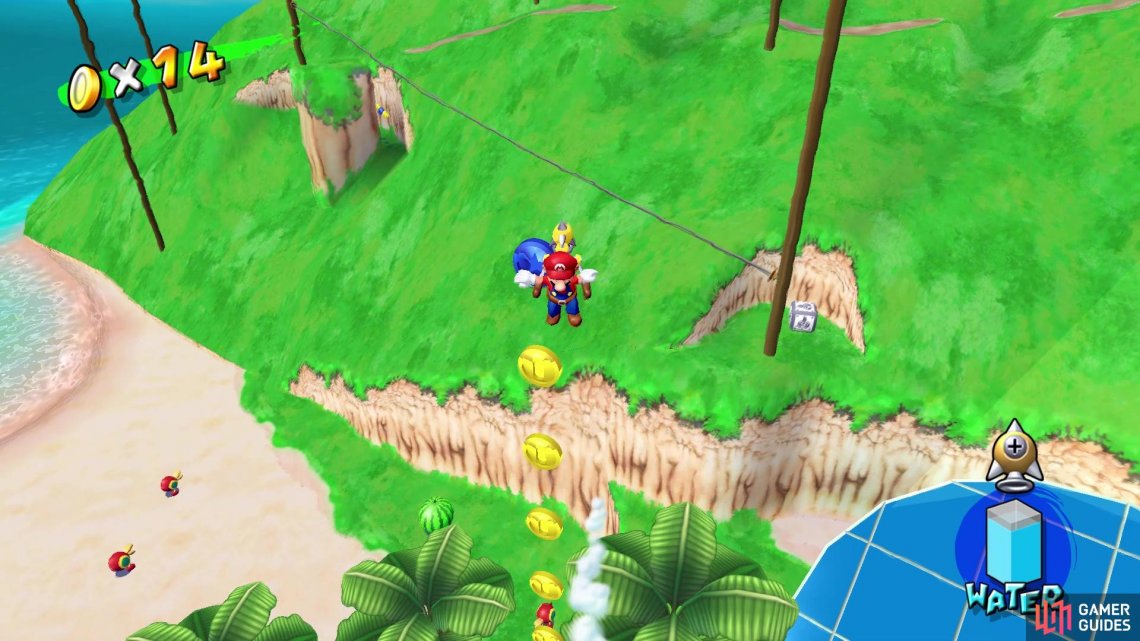 Go to the upper area with the mirrors and Shine Tower, then look for the one tree that has a Blue Cataquack sleeping in it. Disturb its slumber and try to get it to fall out of the tree, then spray it with water to stun it. While stunned, jump on it to knock a Blue Coin out of it.