In order to do this minigame, you will need to have progressed in the main story enough to have full control of the airship. It is also extremely helpful to have a piece of equipment with No Encounters on it, since you will be running through the Sanubia Desert a lot and fighting enemies will make things much, much longer. No Encounters armor can either be dropped by the Ghost or Wraith enemies, as well as customized with 30 Purifying Salts. Note that Geosgaeno can also drop a piece of equipment with No Encounters on it. Once you have the armor, head to the northern part of Sanubia Desert, near the entrance to Home (avoid the NPC right by the entrance there), and on the southern end of the large area with the sandstorm will be a Cactuar stone. 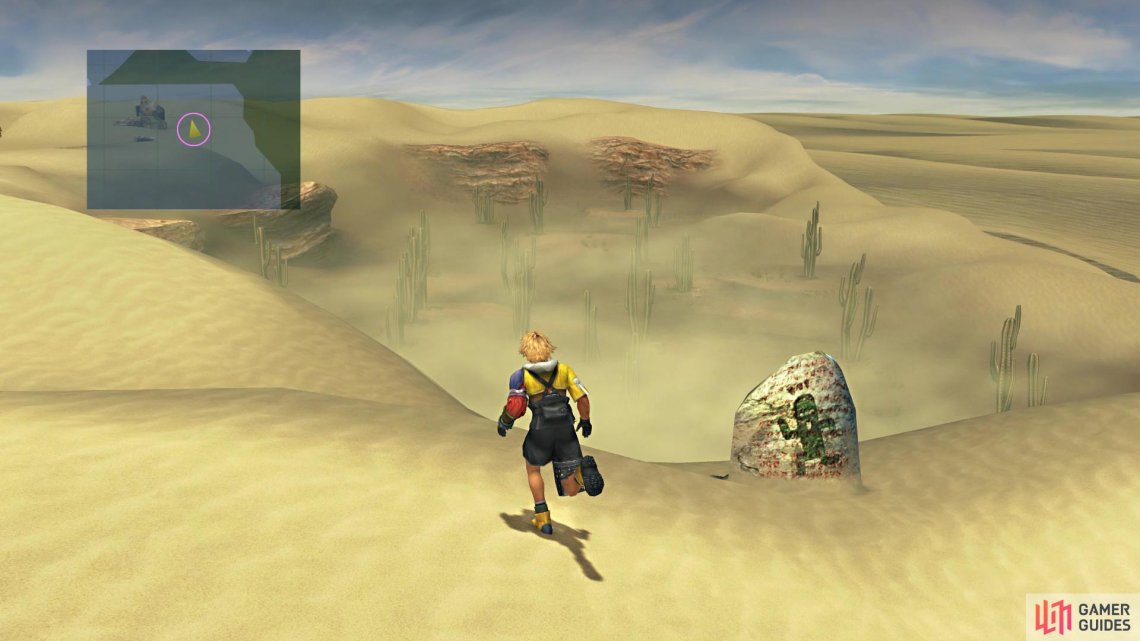 (1 of 3) The Cactuar stone is right outside the sandstorm

By interacting with this stone, you will start the Village of the Cactuars sidequest, which requires you to find 10 Cactuars according to the given clues. Upon finding the Cactuar, you will begin a minigame of “Red Light, Green Light”. Basically, you will have to move towards the Cactuar, but only when its back is turned. If the Cactuar turns in your direction, then you have to stop moving. The problem comes from the fact that you’re timed during these little minigames with the Cactuars. If you move while it’s facing you, then you will fail. You only get three chances to pass the minigame, but passing is not needed to get the key item, which is the Mercury Sigil.

Tomay is back at the Oasis, the first screen at the southern end of the desert, where you first appeared during the main story. He will be in the shade on the right side of the screen, to the right of the Save Sphere. Tomay is pretty easy to sneak up on, considering he is the first one. It should be noted that if you catch them before time runs out, then you will have to do battle. They function just like normal Cactuars, except they will not run away while in battle. This makes them the perfect candidate for capturing, for the Monster Arena.

Head to Sanubia East and you should see a dead-end area by the northern exit. This is where Rovivea will be running around, so approach him to begin the minigame. He’s not really different than the previous one, so if you had no trouble with Tomay, then you shouldn’t have any with this one, either. Bring whichever sphere you got back to the stone.

In the same area as the Cactuar stone, there are two signs in the middle of the desert. Inspect the one a little farther to the west, which should talk about a 20% discount, and you will find this Cactuar behind the sign. As with the previous two, Chava isn’t that hard to get in the minigame, so you shouldn’t really have any trouble. 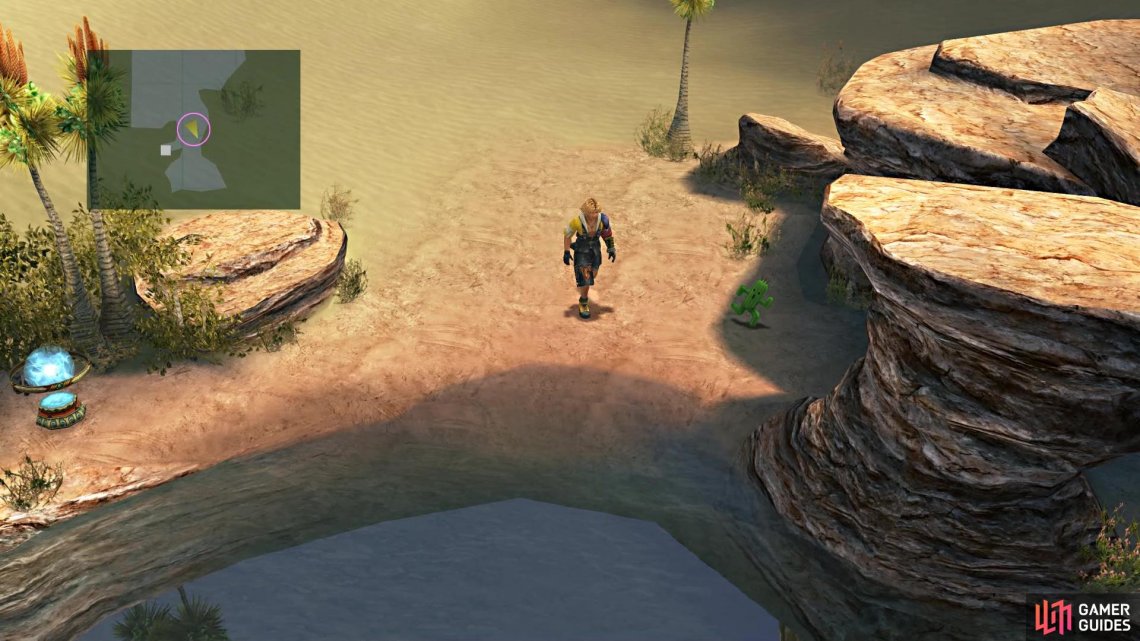 Alek and Aloja play tag in the ruins of men.

These two will be together in Sanubia Central, which is the large area with ruins on the western side. In fact, Alek and Aloja will be running amongst those ruins. Both of them will appear in the minigame, but they won’t act independently from one another, so you don’t have to worry about that. They aren’t really any harder than the previous ones.

You will find Vachella in Sanubia East. In that zone, there is a Save Sphere underneath a tent, which is where you found one of your party members back during the main story. Touch the Save Sphere, then back out of the menu to make Vachella appear. This is where the minigame will become a lot harder, as after Vachella turns around the first time, he will turn around more often. In fact, you will need to move little by little in order to make it before time runs out.

Travel to Sanubia Central and on the far west side, there will be a chest in the corner. Open the chest to reveal this Cactuar hiding inside it. While the minigame with Robeya is easy, there are treasure chests on the sides, along the way. They contain some nice items, but nothing that cannot be gotten in another way. So, it’s best to ignore the chests and go straight for the Cactuar. 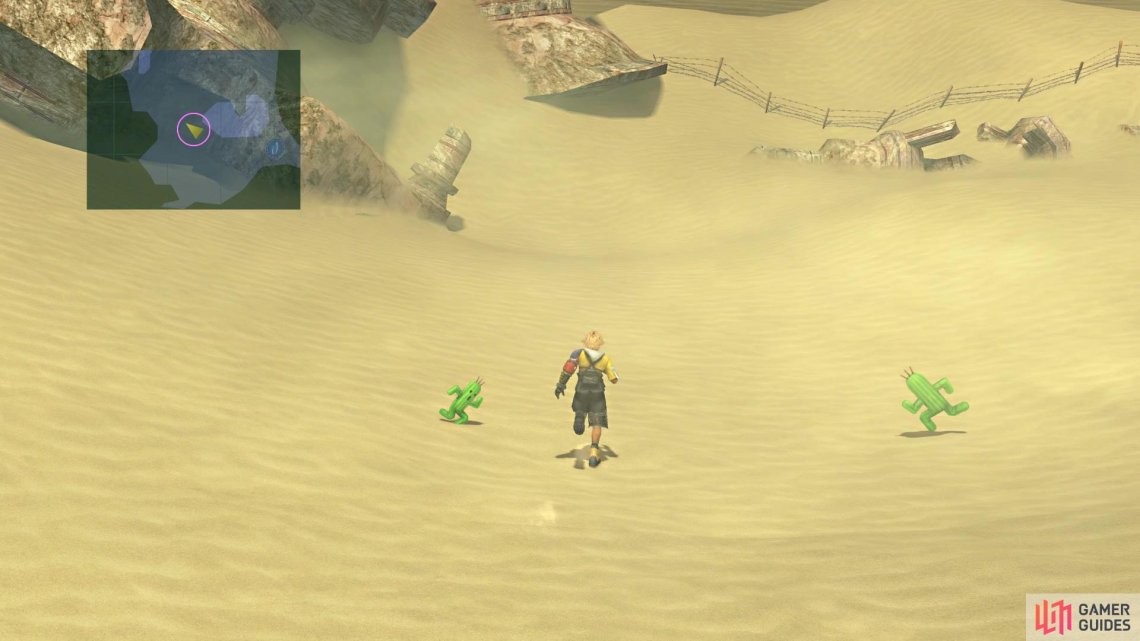 *** fiery inscription-the lord of the hole is gone. Isrra thinks.***

Isrra is found in the same area as the Cactuar stone, but you will need to exit and re-enter the area in order to make him appear. Once you do, you will find him running around one of the quicksand pits. The only thing hard about the minigame with this Cactuar is that he will spend a longer time staring at you, so you will have to make use of every little bit of time in moving towards him.

Much-curious Elio has left on a journey.

Head back to the Oasis and you will find Elio by the Save Sphere. Note that if you teleport in to the Save Sphere, head to the next area, then return to the Oasis to find him. Elio will use the Save Sphere to teleport to your airship, so follow suit. Head up to the deck to find Elio at the end of it. He’s not too difficult to get, although the ship will tilt sometimes during the minigame.

After you return the sphere from Elio, you will automatically find Flaile, since he is right behind you. As the last one, Flaile is a bit tricky, as the prompts on the screen to determine when he turns around, as well as the sounds, are a complete lie. So, you will have to rely on your vision the whole time, by keeping an eye out for any movements and toss away any sounds you hear. 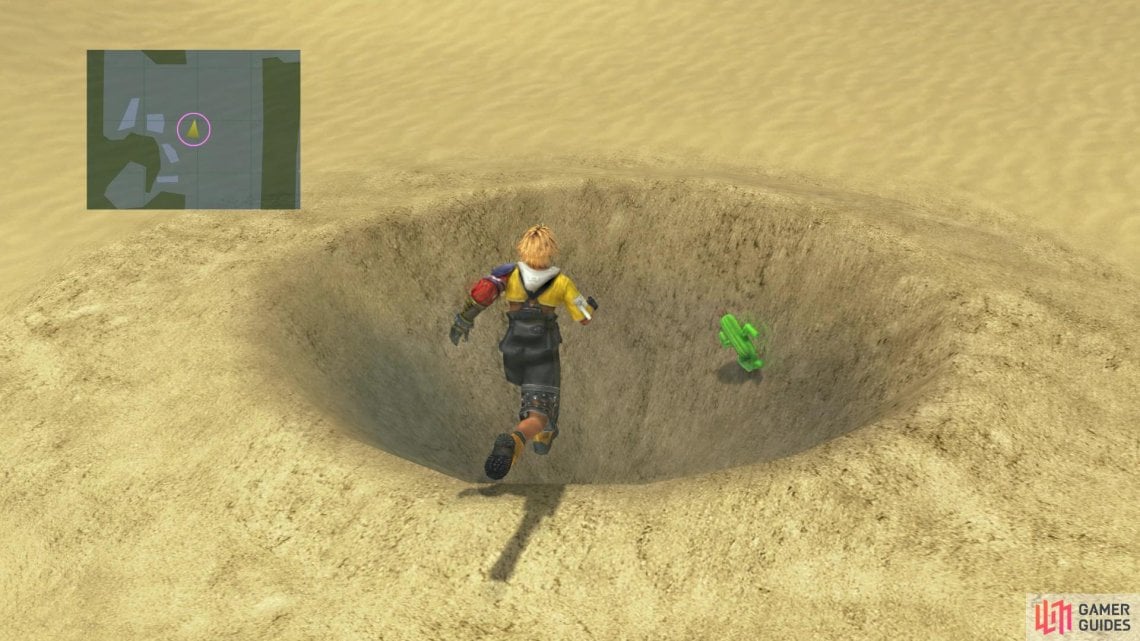 (1 of 4) You will find Isrra in this quicksand pit

Once you place the sphere gotten from Flaile into the Cactuar stone, the sandstorm covering the lower area will lift and you will be able to go down there. You went through all of the trouble for two chests, the first of which will contain the Mercury Sigil. Note that it doesn’t matter whether you succeed at the Cactuars’ minigames or not in order to get the Mercury Sigil; you will always get that, no matter what. The other chest’s contents will be different, as it solely depends on how many good spheres you got from the Cactuars. The following are the rewards: