The Cloister of Trials is a part of the temples that dedicate themselves to Yevon, where summoners and their guardians must prove themselves, in order to prove their worth. For the game, though, they are basically puzzle areas, with your goal being to make your way to the Chamber of the Fayth. This is done by using three different spheres to access various sections of the puzzle: Glyph Spheres, Destruction Spheres, and a sphere named after the temple location itself (Besaid Sphere for this particular temple). The Glyph Sphere will typically help in reaching the chamber at the end, with some help from the place’s signature sphere, while the Destruction Sphere will usually help pave the way for the temple’s treasure.

Important: While you can come back later and redo the puzzle to get the treasure within, Besaid Village will eventually be blocked off by a powerful optional boss if you progress too far into the main story. Thus, it’s ideal to get the treasure on your first visit, as you will need it in order to get one of the Aeons.

When you begin, head north and examine the brown wall straight ahead, at the end. This will make a glyph appear on the wall next to it, so go ahead and touch it to make an opening appear. Down the stairs, you should see a little receptacle on the wall and upon examining it, you will learn of the three types of spheres to be used in the Cloister of Trials (outlined above). At the end of the explanation, you will remove the Glyph Sphere. It should be noted that you can only carry a single sphere at a time, so you will need to deposit the current one in your hand if you wish to pick up another. 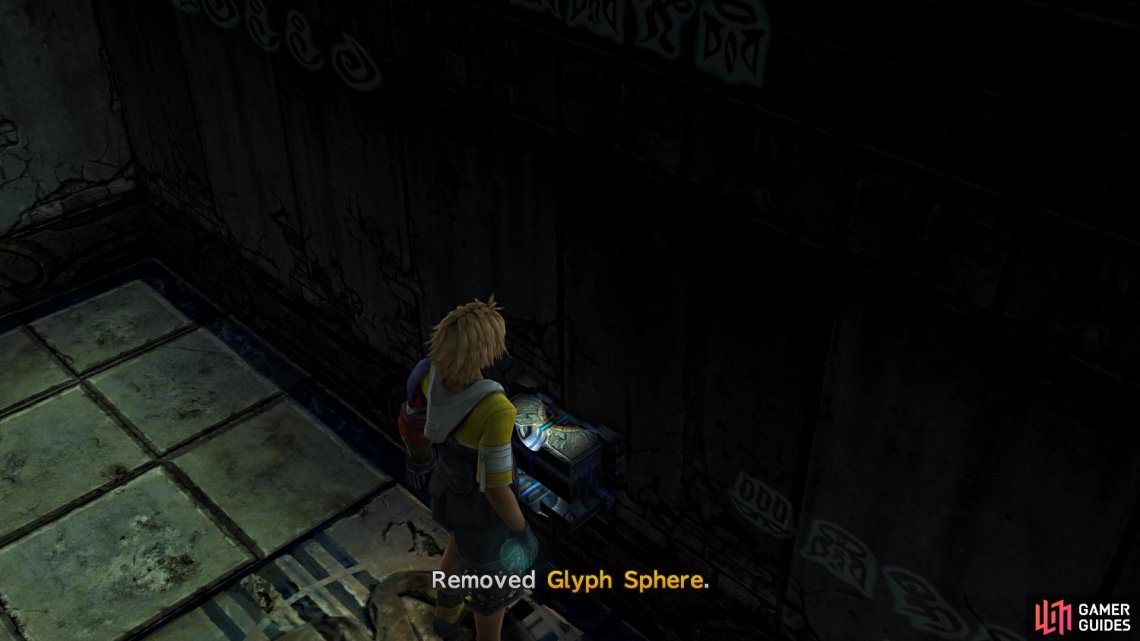 (1 of 7) Remove the Glyph Sphere from this receptacle

Continue down the stairs and to a door, where you want to place the Glyph Sphere from above in it, opening the doors. Once the doors are open, take the Glyph Sphere back out of the opening on the one, then follow the hallway until you see a hole in the wall. Place the Glyph Sphere here to open the wall, where you’ll find the Destruction Sphere. Ignore it for now and round the corner to find a pedestal. Across from the pedestal, touch the wall to open up another room, where you will find the Besaid Sphere. Grab it, then place it on the pedestal you saw before, which will open up the way to the end of the puzzle.

However, don’t do that just yet, as you still need to do something with that Destruction Sphere. Double back to it and pick it up, then place it where the Besaid Sphere originally was located. Doing this will bust open a wall at the end of the hallway, where you will see a chest. Inside this chest will be the temple’s treasure, a Rod of Wisdom. This is a weapon for an upcoming party member, which will be a nice boost over the default weapon she will have equipped. Return to the pedestal and push it into the middle of the room that opened up, by running into it. When you get to the right spot, it will sink into the floor and a cutscene will play out, where you’re introduced to a few more characters.

Clear the Besaid Cloister of Trials.