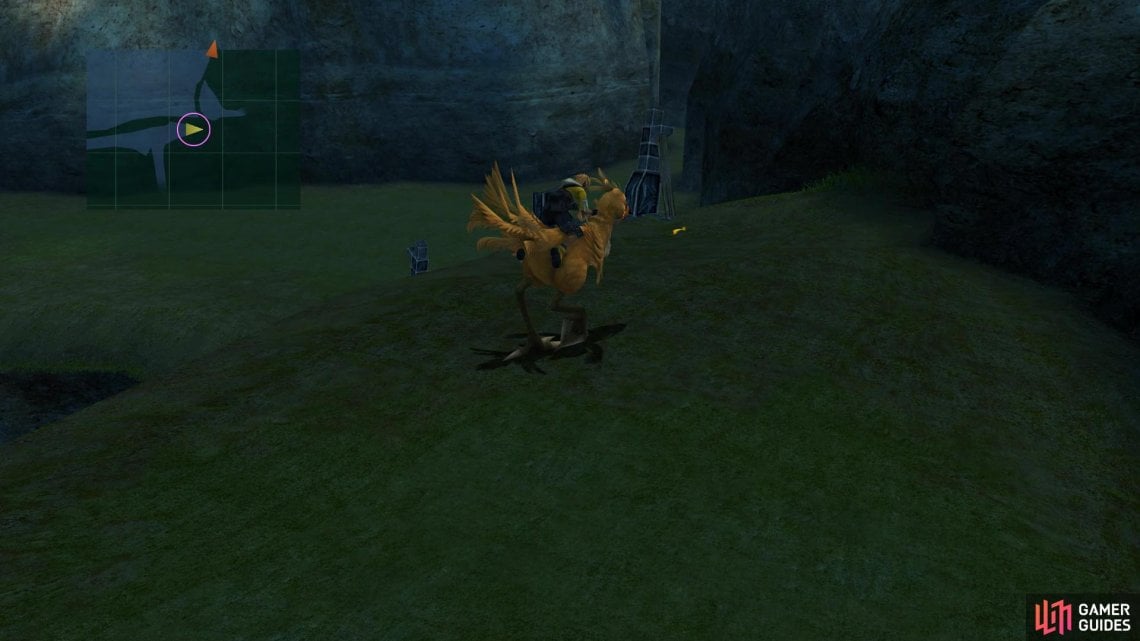 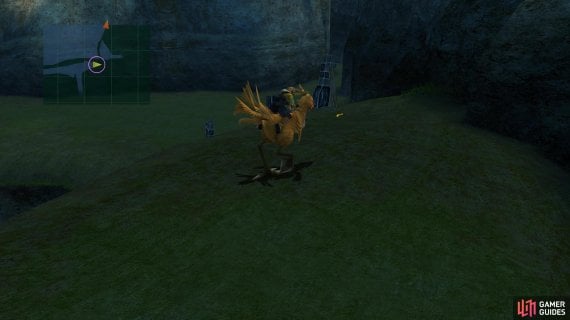 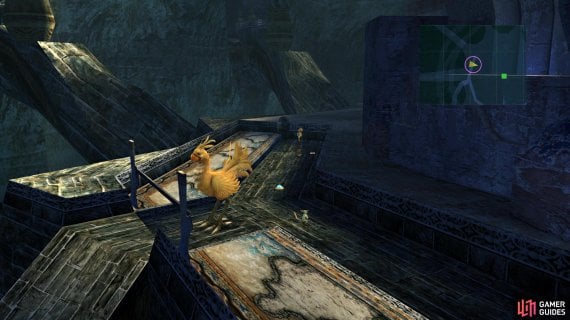 Use this feather near the entrance to get to the exit for Remiem Temple (left), You can find Al Bhed Primer Vol. XXIV on the left side of the temple (right)

Cross the long bridge and the temple will be right in front of you, but you will not want to enter just yet. In fact, it’s best to stay away from the inside of the temple for now, as Yuna might be a bit weak right now to handle the content inside. Instead, go off to the ledge and at the dead end, you will find Al Bhed Primer Vol. XXIV on the ground. There is also a chocobo nearby, as well as a sphere, but both do nothing really, although the sphere tells you about the Chocobo Challenge. Head to the right side of the temple grounds to find another chocobo, but interacting with this one will allow you to start the Chocobo Challenge.

The Chocobo Challenge is essentially a race against the chocobo on the other side to the bottom of the maze-like platforms. There are six chests littered throughout this maze and opening a certain number, then winning the race will reward you with some nice items. On your first race, though, you should just concentrate on getting to the bottom, as the reward is already set in stone and doesn’t involve the chests. For winning the first race, you will receive the Cloudy Mirror. This is part of the Celestial Mirror sidequest, so it’s important that you get it. 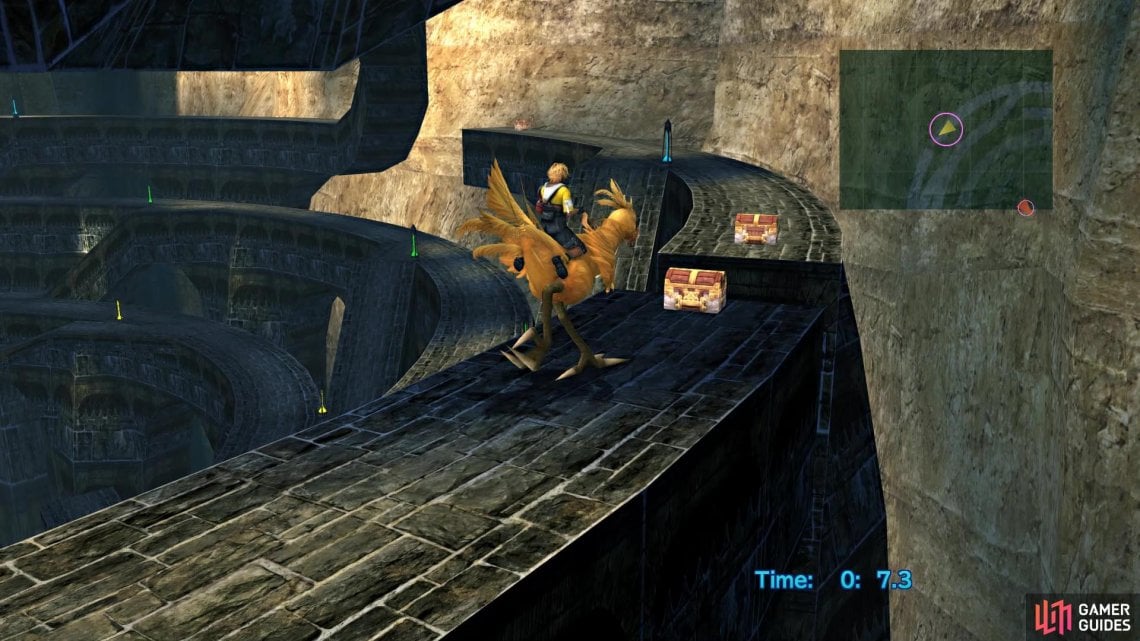 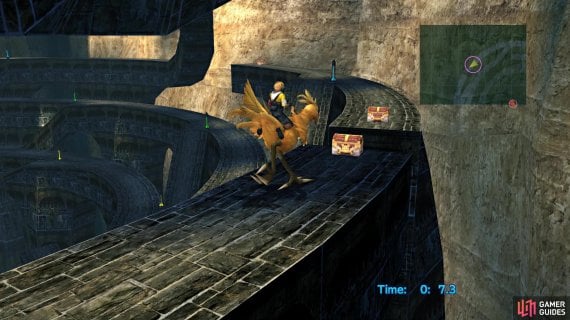 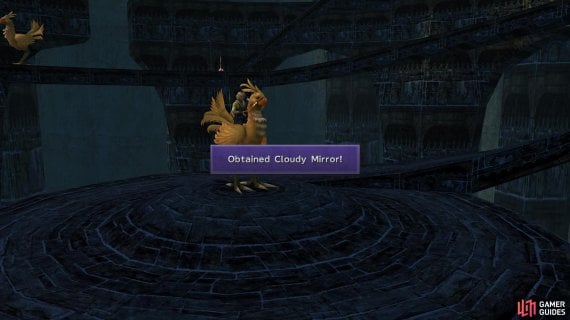 Your goal is to open the chests throughout the race and still win (left), Your first win will always be the Cloudy Mirror (right)

So, you wish to get those nice items, right? Well, if you want to get five chests and win the race (it’s impossible to get six chests and win), then you will need to follow a specific route. Before doing anything, there are poles on the corners throughout the course, and it you touch one and win the race, your run is invalid and you will only get a Potion for your efforts. Getting on to the chests, when you begin, go straight and at the end, you will find Chest #1. After opening the chest, the chocobo will flutter to a different spot and this first chest will place you right in front of a ramp.

Go up the ramp, then turn around to another dead end and Chest #2, which will place you at the same spot as the first one. Head up the ramp again and go straight this time for Chest #3. You will now be placed on a lower track, so continue straight and you should come to Chest #4 at a dead end. The chocobo will flutter over the gap in front of the chest, so keep moving straight and head up the second ramp and to the dead end right in front of you, which will have Chest #5. As soon as you touch that one, it will deposit you right by the goal at the bottom. The list of prizes are as follows: 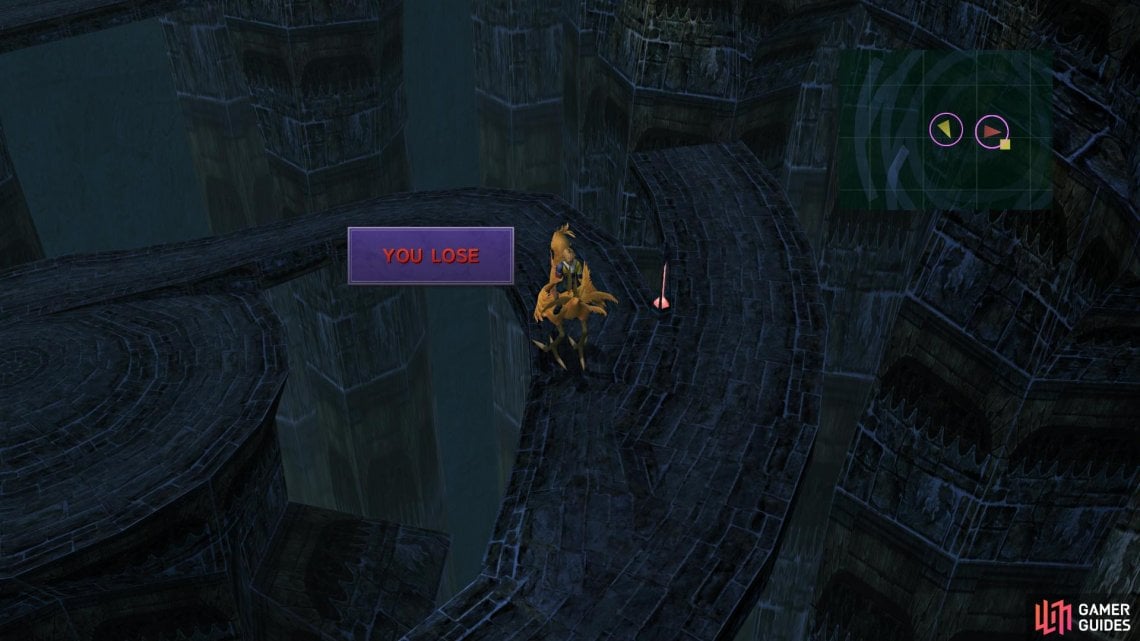 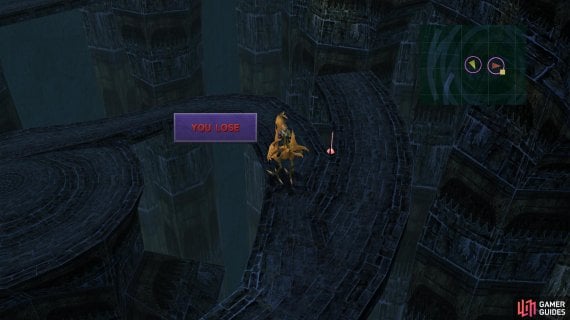 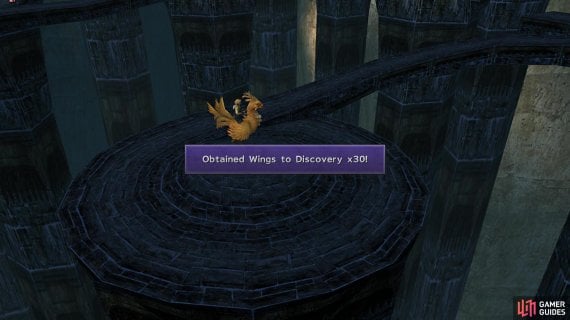 Getting all five chests and winning can be difficult (left), The Wings to Discovery are the key prize from this minigame (right)

The biggest prize you want here are the Wings to Discovery, because if Rikku mixes two of them, that will net you Trio of 9999. This mix is quite powerful, since it makes all attacks and healing do 9,999 damage for the party hit by it. There are some items you can start getting now that basically hit six times, so Trio of 9999 can make some bosses go by much more quickly. The Pendulums are nice, because you can customize them into Master Thief on an armor, allowing that character to essentially only steal the rare items. The only really good thing that the Three Stars can do right now is be customized for One MP Cost on a weapon, but it’s better to save this until later in the game.