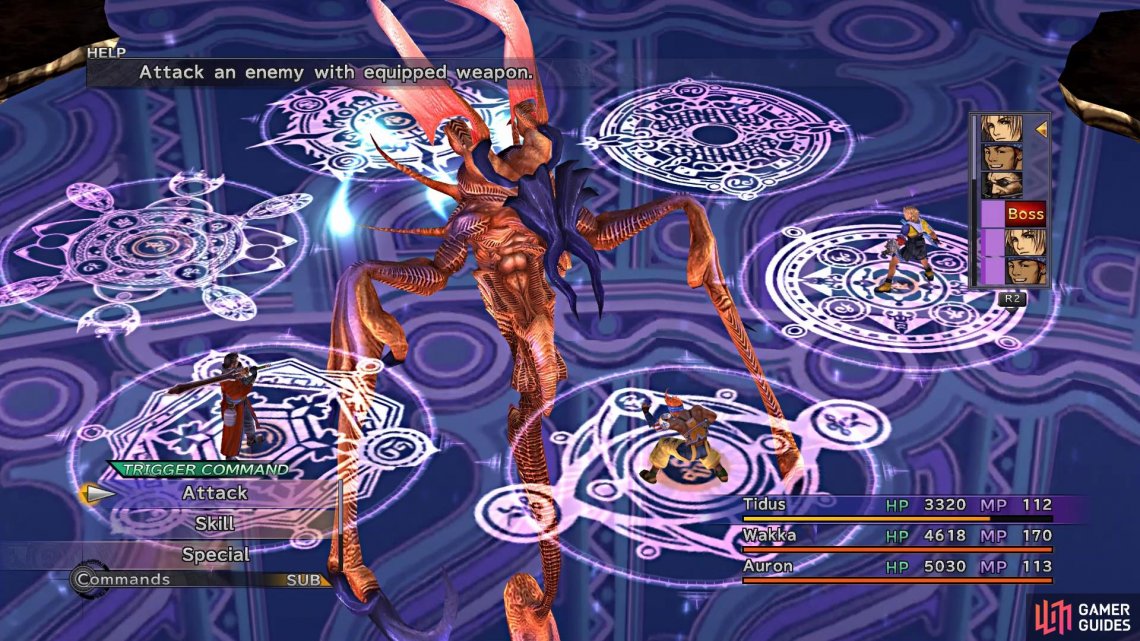 The Spectral Keeper can be an annoying boss, despite its limited arsenal of moves. Before diving into those, the arena for this boss is a bit special. Instead of just standing there and exchanging blows with the boss, you will be placed on the glyphs. You will see a Trigger Command here, called Move, which will let you move to another glyph. This will become important later, but the very first thing you will want to do at the beginning is move so there is one space in between your party members. The reason for this is because the boss will counter all attacks by hitting the three spots in front of it.

As an example, you start out the battle with your three characters all next to one another, right in front of the Spectral Keeper. Should you attack straight away, then the boss will counter and damage all three characters. The main move, though, for the Spectral Keeper is called Berserk Tail. This targets a random character and will strike them for physical damage, while also having a chance to inflict Berserk. Since you have no control over berserked characters, this can be bad if you’re trying to be cautious. Actually, if you have Berserk Ward on your armor, it seems that Berserk Tail won’t actually inflict the ailment.

After being attacked a few times, the Spectral Keeper will plant two Gylph Mines on the field, in random spots. If they are placed underneath a character, you will want to move them as soon as possible. The mines have their placement on the turn order, and will explode when it’s their turn comes up. If a character is standing on the mine as it explodes, they will be instantly KO’ed. As you can figure out, a combination of a berserked character and a Glyph Mine is a bad thing, but thankfully you can heal berserk with a Remedy or Esuna. That’s the extent of the offense for Spectral Keeper.

You should be keeping an eye on your health at all times, since you will receive constant counterattacks and also have to worry about Berserk Tail. The boss is not weak to any element, but is susceptible to Mental Break, so you can reduce its magic defense to nothing. You can also Provoke it, but it doesn’t do anything out of the ordinary. Putting Protect on everyone is ideal to keep them alive, as well as Haste to give them more turns.