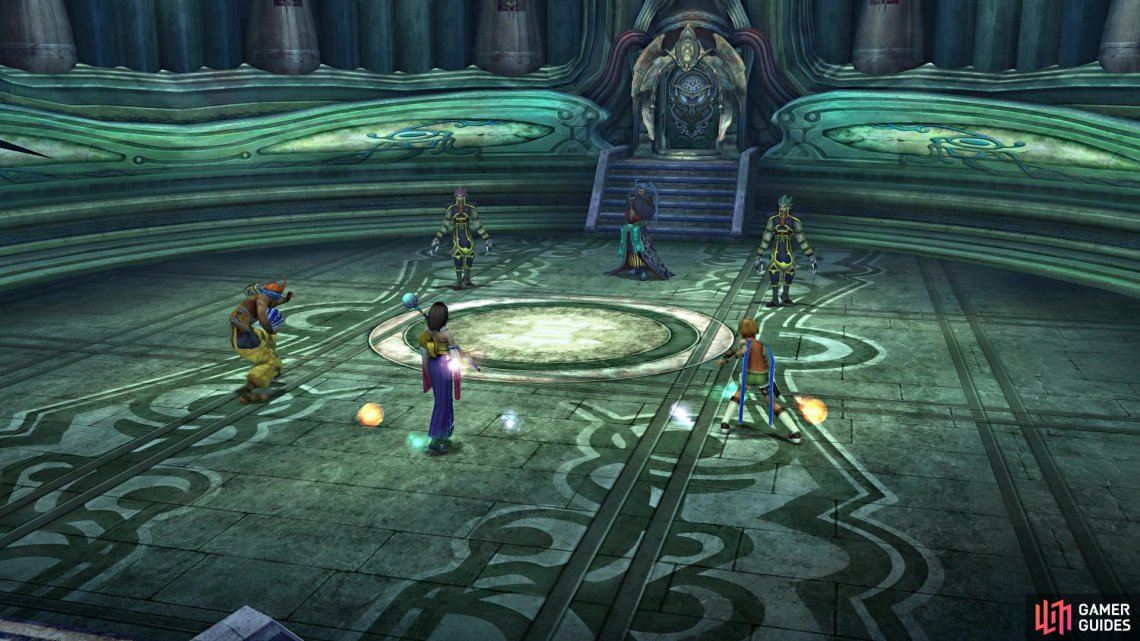 The battle against Seymour comes in three phases, with the first and third phases being pretty similar. During the first phase, Seymour will have two Guado Guardians with him, who can be quite annoying and should be your first priority. Note that at the beginning of the battle, Seymour will cast Shell on himself, while the Guado Guardians will use Protect on themselves. If you attempt to attack Seymour with physical attacks, then the Guardians will take the hit for him. Of course, him having Shell on also means that magic attacks won’t do much damage, either. To add to this, whenever the Guardians are damaged, they will use a Hi-Potion on themselves.

The Guardians also have access to Remedies, so they will use them if Seymour or they are afflicted with a status ailment (like Poison or Silence). The first order of business is to get rid of the Guardians, but the Auto-Potion makes things complicated. However, you can stop them from using Hi-Potions by using Steal on them, completely removing them for the remainder of the battle. For offense, the Guardians can use either Thunder or Blizzard, but they also have something called a Shremedy, which has a chance to inflict Confusion. You will want to cure this ASAP, since you don’t have a heavy attacker turning on one of your own party members.

Note that the Guardians are susceptible to Petrify, so if you happen to have a Petrify Grenade or Kimahri has Stone Breath, then that can take care of them very quickly. Moving onto Seymour, he is a lot more predictable, as he will blast your party with elemental spells. Thankfully, these spells are in a specific order, too, so you can anticipate what is coming next. He will use the second tier spells (-ra), but if you are using an Aeon, then he will upgrade those to the third tier (-ga). He does the spells in the following order: Blizzara, Thundara, Watera and Fira.

He will not deviate from this order at all, so you can do things much easier by having Yuna cast the respective Nul spell for the upcoming elemental attack (Seymour’s spell only hits a single character). At the beginning of the battle, by the way, Tidus, Yuna and Wakka will have a Trigger Command they can use on Seymour to talk with him. Tidus will gain some Strength from this, while Yuna and Wakka will get some Magic Defense. So, first get rid of the Guado Guardians, then you can focus on Seymour. Once his HP goes under 3,000, then he will summon Anima and the second phase will begin. Note that any Guado Guardian still alive will be gone.

After defeating Anima, Seymour will return to the battle arena, with full health. Thankfully, the Guardians will not return, so it will just be your party and Seymour. While Seymour’s tactics haven’t largely changed from the first phase, he will be able to cast two spells of the same element in a single turn now (ex. Multi-Blizzara). If an Aeon is out, he will use, as an example, Blizzaga and then Thundaga. Note that his magics are stronger during this phase, but the same strategy as before will apply here.