Swordplay is the name of Tidus’ Overdrive, which has a number of different abilities. He will learn new ones upon using the older techniques. Once you select a technique, a bar will appear and a marker will begin moving back and forth. Your goal will be to stop the marker in the middle of the meter, where there will be a small, gold-colored space. Unfortunately, you only have a set time limit in order to hit this small space and should you hit it, then you will deal additional damage. Note that all of the uses are cumulative and will contribute to unlocking the others, no matter if you hit the bonus damage or not.

The first Overdrive for Tidus is available by default and only hits enemies once. You have three seconds to hit the middle of the gauge, which will appear right away upon selecting the skill. Tidus will do two flips towards the enemy, then perform an overhead sword attack. When underwater, Tidus will simply swim up to the enemy and slash them.

Slice & Dice is unlocked upon using Overdrive ten times, with you given three seconds. It is definitely one of his better Overdrives, since the delay after performing it isn’t as long as the more powerful Blitz Ace. Upon selecting the Overdrive, Tidus will dash back and forth to the enemies, striking them six times. This Overdrive can hit critically, so the damage shown can be doubled. The animation is pretty much the same while underwater. 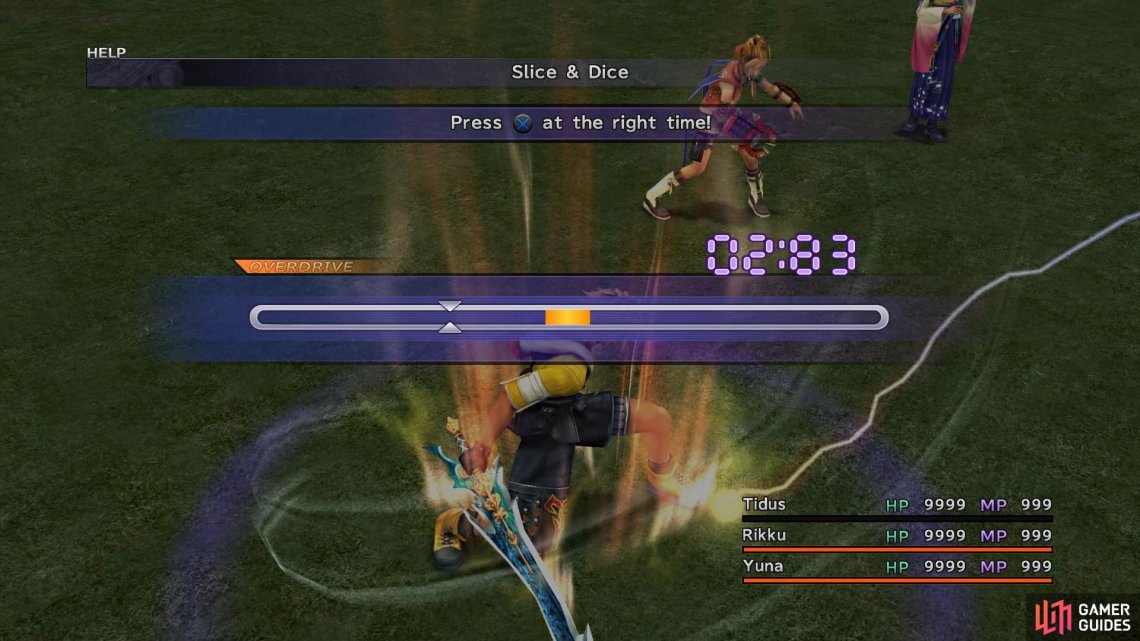 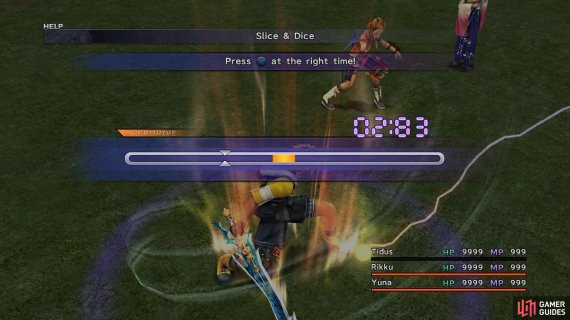 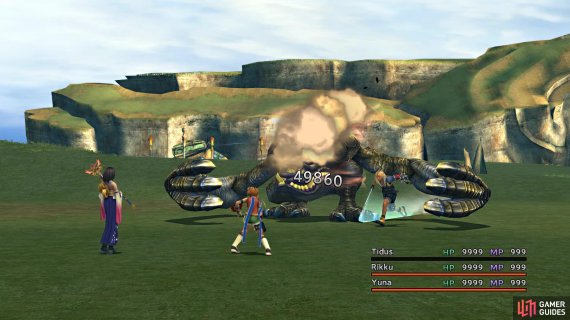 You will need to hit the center portion before time runs out (left), Slice and Dice is probably Tidus’ best Overdrive (right)

Energy Rain is unlocked upon using Tidus’ Overdrive a total of 30 times, with you given three seconds. The gauge will appear right at the beginning, then Tidus will jump off an enemy and into the air. He will then gather energy in his sword, then shoot it at the enemies below, which will explode and damage them. Underwater, Tidus skips the jumping off the enemy bit and just does the energy thing.

The final Overdrive for Tidus, Blitz Ace, is unlocked upon using 80 Overdrives, and you’re only given two seconds to hit the center of the gauge. Tidus will charge at the enemy, then perform a total of eight slashes against them. After doing this, he plants the sword in the ground, jumps off of it and has a fellow party member throw a Blitzball at him. This is when the gauge appears and if successful, Tidus kicks the ball at the enemy, damaging them one more time. If you miss, then Tidus will miss the kick and you won’t get that final hit. Underwater, the ball will come out of nowhere, although the Overdrive stays largely the same.