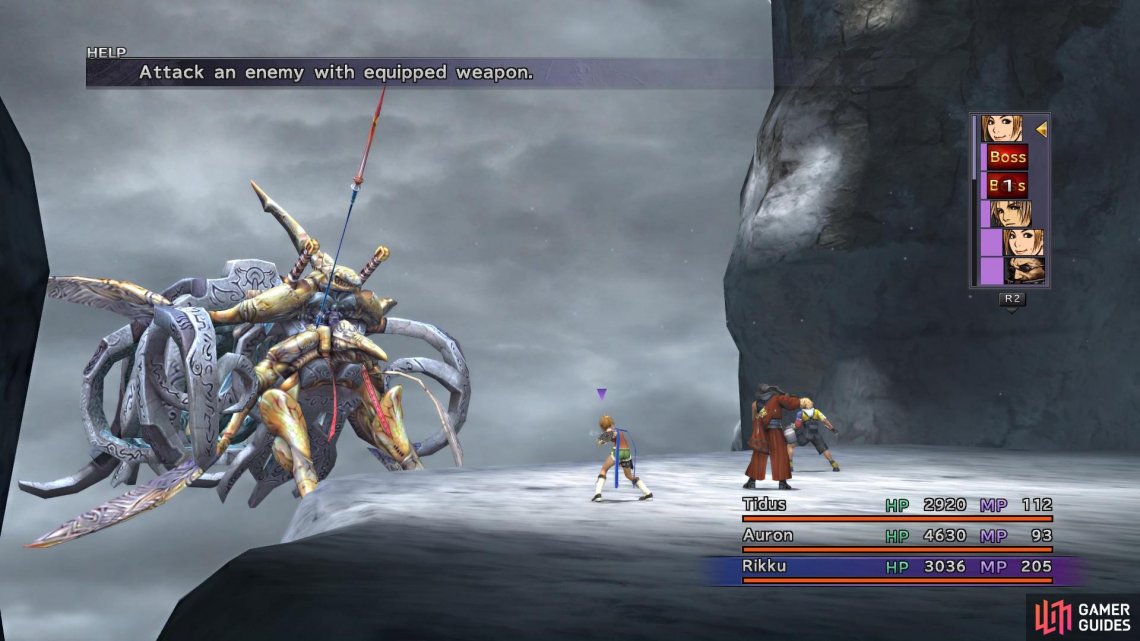 Seymour Flux has a similar feel to him compared to Seymour Natus, as his little friend from before is back, although a little more menacing. Mortiorchis is similar to the previous battle, as depleting its HP will cause it to siphon some from Seymour. It starts at 4,000 HP and will go down by 1,000 HP until it reaches the bottom threshold of 1,000. It has the armored status, so if you wish to use physical attacks, you will need Piercing on your weapon. The biggest pain about this fight is that both Seymour and Mortiorchis will do combo attacks and play off of each other, so you sometimes can’t do anything about what happens.

At the beginning of the fight, you can do Trigger Commands to talk to Seymour with both Kimahri and Yuna, with Kimahri gaining some Strength and Yuna some Magic Defense. As with previous battles with Seymour, there are a few phases that he will go through once his HP reaches a certain point. From the start, Seymour will use Lance of Atrophy on a single character, damaging that character and possibly inflicting the Zombie ailment on them. On Mortiorchis’ next turn, it will use Full-Life to essentially KO the character. It is possible, if your characters are fast enough, to use a Holy Water to cure the Zombie before Morti’s next turn, where it will still cast Full-Life, even if Zombie was cured.

Once Seymour uses Lance of Atrophy twice, he will use Dispel on his next turn on the entire party. On Morti’s next turn following the Dispel, it will use Cross Cleave to deal some major damage to the entire party. Depending on turn order, you might want to defend after the Dispel to minimize the damage done. Hopefully, your party members have enough health to survive the attack, which does around 2,000 or so damage. This will be the way the fight goes until Seymour drops below 50% health or so. Note that at 75% HP, Seymour will automatically cast Protect on himself, so you may want to Dispel that.

At the HP threshold mentioned above (50%), Seymour will cast Reflect and begin bouncing Flares off himself, onto your characters. You can Dispel the Reflect, causing Seymour to cast Flare on himself, but he will recast Reflect. While that’s definitely deadly, the biggest change comes with Mortiorchis, as it will gear up to use a very powerful attack. It will “enter Auto-Attack Mode” first, then announce it is “Ready to Annihilate,” before unleashing Total Annihilation on the third turn. Total Annihilation does huge damage to the entire party and having everyone defending will help a lot in trying to stay alive.

On subsequent turns, Mortiorchis only needs one turn to charge up Total Annihilation. As with Seymour Natus, Flux will also use Banish on Aeons, so they only get their initial turn before being sent away. You can use this to your advantage by using both Yuna’s Overdrive, as well as their own, if the gauge is full. It also appears that once you cut his HP to below 50%, he stops using Dispel, so you can also buff up around then, particularly Shell. Note that Seymour is susceptible to both Poison and Silence, although he can resist both. A Poison Fang will 100% work, as will Silence Buster, but the latter only works for one turn. Poison does not trigger the phase change at 50% HP, if the poison dips it below that.