Upon entering Macalania Woods, there will be a short scene, then you can head towards the Save Sphere just ahead. This will be at a fork in the main path, but ignore the right one and head up the left path. As you round the second sharp bend on the minimap, search the left side to open a chest that contains a Sleepy Cait Sith. Follow the trail and near the exit to the next area, you will run across another chest, with this one holding 2,000 Gil. It should be quickly noted here that some of the enemies here are resistant to Water, so it’s a good idea to switch weapons to something without Waterstrike on it (since Thunder Plains’ enemies were largely weak to Water). 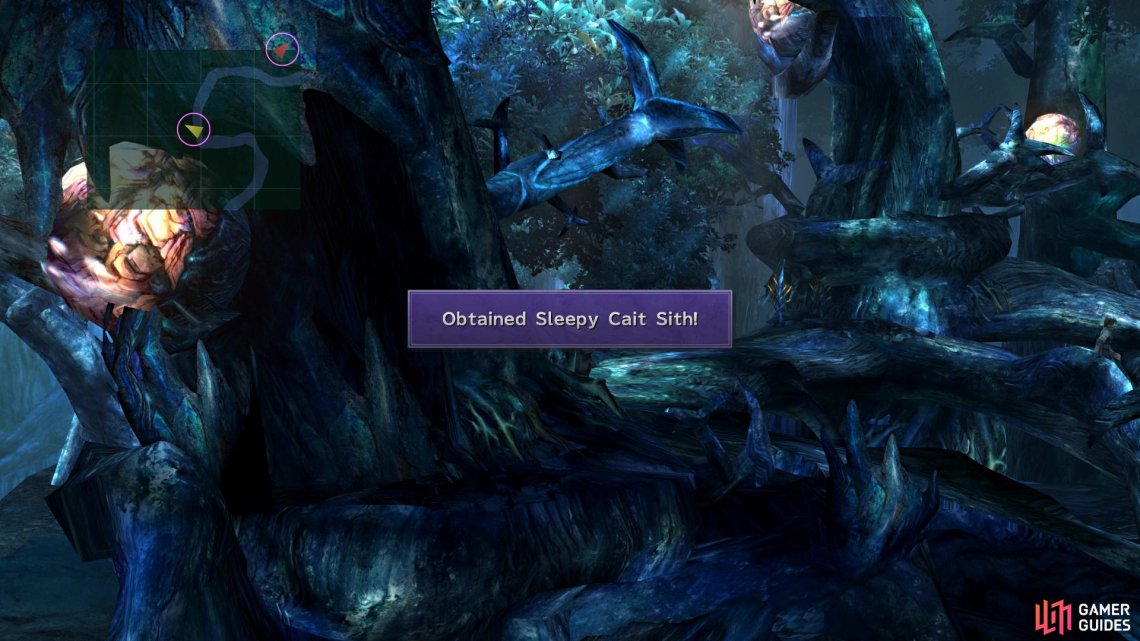 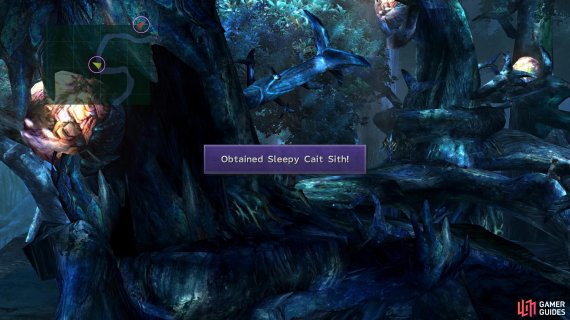 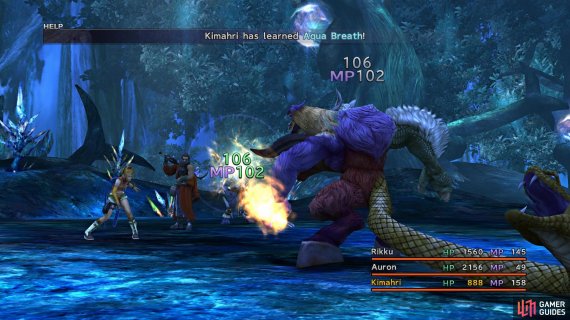 There are a few chests in Macalania Woods that are hidden behind trees (left), Don’t forget to use Lancet to learn Aqua Breath from the Chimera (right)

Note: Make sure that you use Lancet with Kimahri whenever you run into a Chimera, as you can learn the Aqua Breath Ronso Rage.

On the second screen, just follow the trail until you reach the loop and at the top of the loop, you will find a chest slightly hidden behind some foliage; it contains three Phoenix Downs. Keep going until you trigger a cutscene with Barthello, who is looking for a missing Dona. A little farther, you will run into a NPC that talks about a butterfly. This will unlock the [Butterfly Catching] mini-game, which is needed to unlock the [Saturn Sigil] for Kimahri’s Celestial Weapon. Unfortunately, you can’t get the Sigil right now, but let’s talk about the mini-game for a little bit.

Touch the “butterfly of many hues” and you will begin the mini-game, which has you collecting the blue butterflies and avoiding the red ones. Throughout the mini-game, once it’s started, there will be no random encounters, so you won’t have to worry about fighting, in that sense at least. If you touch a red butterfly, you will trigger a battle against some enemies, but they will be stronger than their normal counterparts (better defense and magic defense). Of course, you have a time limit in which to catch all of the blue butterflies, with you losing a few seconds if you touch a red one.

There will be two screens where you will find the butterflies for this minigame, the initial one where you met the NPC and the adjacent screen; touch the one butterfly mentioned above to start the minigame. There are seven blue butterflies on each screen and each one will net you a different prize. The prizes will differ depending on where you are in the story, with the first set including a MP Sphere and Ether. This first set of prizes will be present until you defeat the boss in this area, after which, the second set of prizes will be available. The third set is the one you want, which contains the Saturn Sigil, but that won’t be available until later in the game. 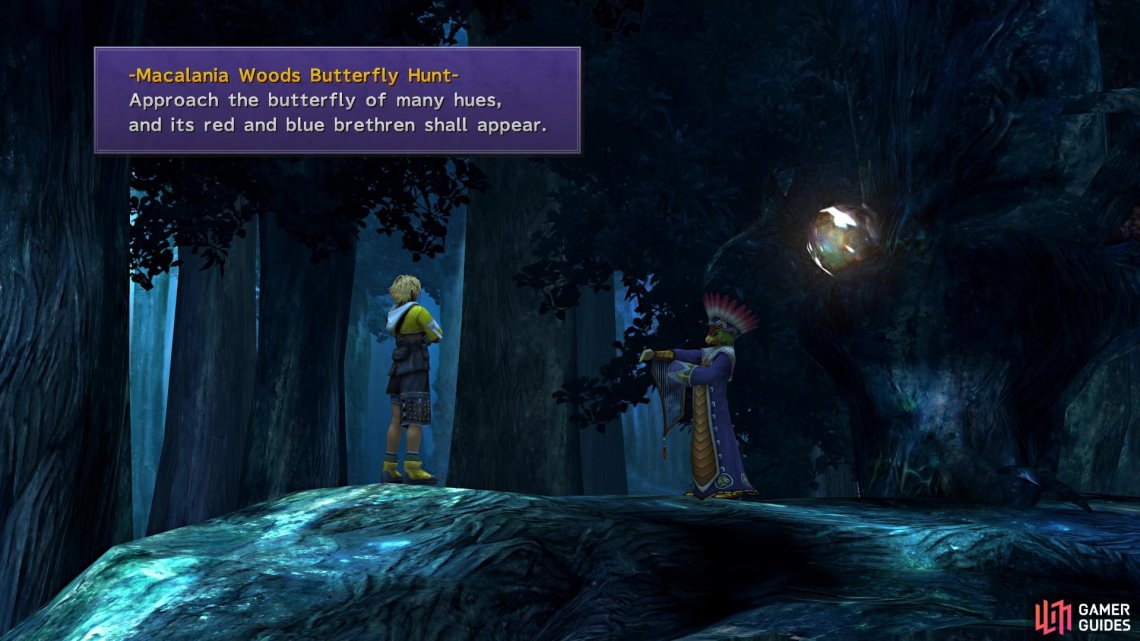 Feel free to do the butterfly minigame, if you want, but to continue, run past where you met the NPC that explained the butterflies and into the next area. After the intial path, you will be heading up the big tree branch. When you get to the sharp bend going northeast, look behind the tree on the left side for a chest holding a Remedy. Keep running until you reach the next screen, where there will be a Save Sphere right next to you. You will also see O’aka here, so speak with him to enter the shop screen, then quickly exit it. He will ask if the prices are too expensive, to which you should reply with “Too pricey,” causing him to cut the prices by 25%.

Note that this is also your first opportunity to purchase Hi-Potions, so if you are running low, buy some to replenish your stock. There is a path to the right of O’aka, which is blocked off, but on the ground there will be Al Bhed Primer Vol. XV. Continue north of O’aka for a scene, with Auron opening up a new path. If you didn’t save your game before, do so now and head through the newly opened path. When you’re ready, keep moving forward to make the next boss. 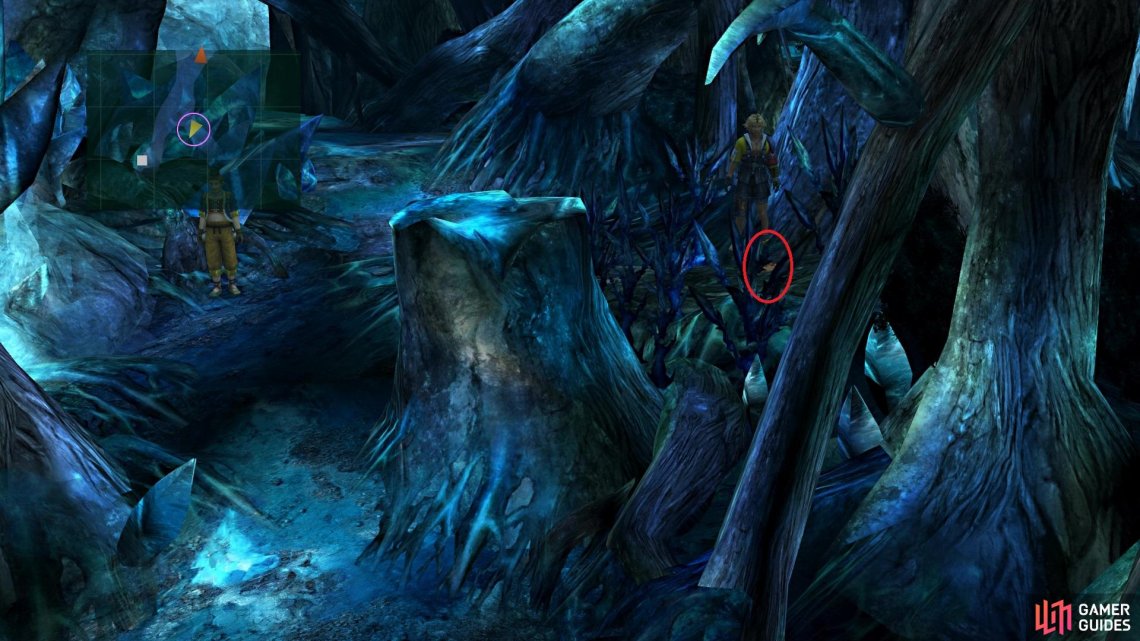 Al Bhed Primer Vol. XV is located to the right of O’aka

Spherimorph is a bit of a tricky boss, but definitely a lot easier once you know the mechanics. The whole thing about Spherimorph is that it will absorb every element, except for one. Of course, the element it takes damage from is random, though, so you won’t really know what to attack with right away. However, there is a trick you can do to determine its current element, which is to perform a regular attack on the boss. Doing this will cause Spherimorph to counter with a tier 1 spell (Fire, Ice, Thunder or Water), which is the same element that it currently is. So, with this knowledge, you would cast a spell of the opposing element to deal big damage to the boss (fire and ice are opposing, as are thunder and water).

The biggest problem comes from the fact that once hit with its elemental weakness, Spherimorph will use Elemental Shift to change its weakness, so you will need to do the above again to determine the new weakness. As for its attacks, Spherimorph’s normal attack deals moderate damage, but once it gets lower on HP, it can use Press on the entire party, halving their HP. The only other spells it has seem to be counters to the physical attacks you do to determine the weakness. You can have Yuna set up things by using the Nul set of spells, which can protect from a single elemental spell. Lulu will be the biggest star of this battle, though, as her elemental damage should be more than enough to bring the boss to its “knees” once you know the weakness. 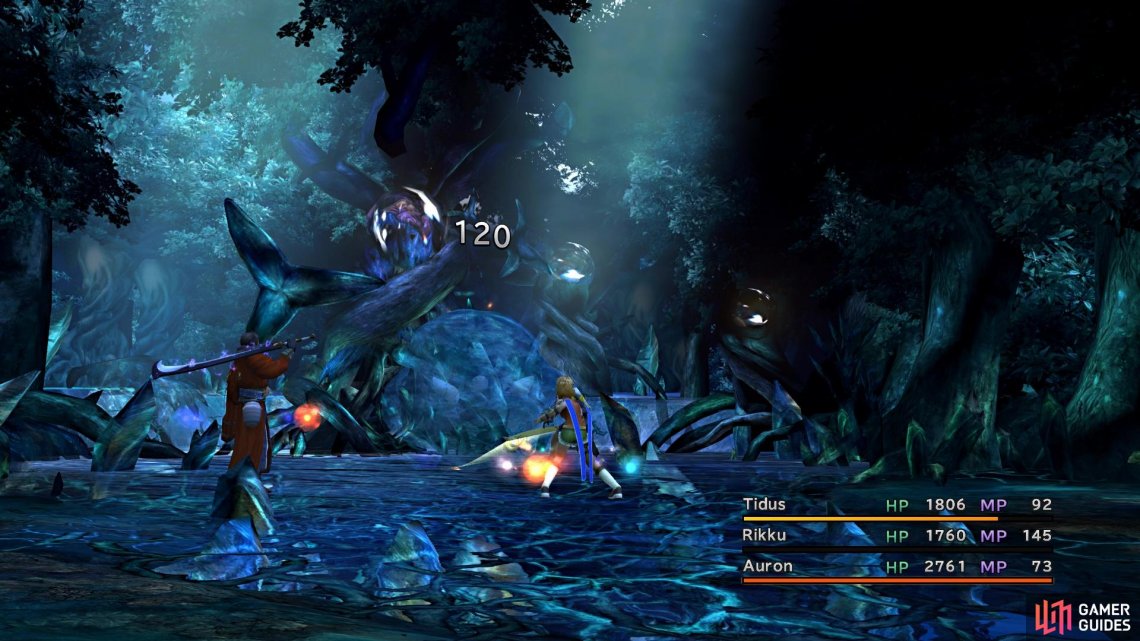 (1 of 4) Strike Spherimorph with a normal attack

Tip Overkilling the Spherimorph will net you two Lv. 2 Key Spheres, which will help in making Tidus a lot stronger than he is now, if you wish to use them on him.

Upon winning the battle with Spherimorph, you will receive a Jecht Sphere. These will illuminate on some of the backstory in the game, but the important thing it does is help unlock new Overdrives for Auron. This particular Jecht Sphere will unlock Shooting Star and you can collect more throughout Spira, in the areas you’ve already visited. It is entirely up to you whether you go collect them now or not, as you can get them later. However, one is located in Besaid and that will be guarded by a powerful optional boss once you progress in the story enough. The next page will be dedicated to backtracking to retrieve the Jecht Spheres in previously visited areas.