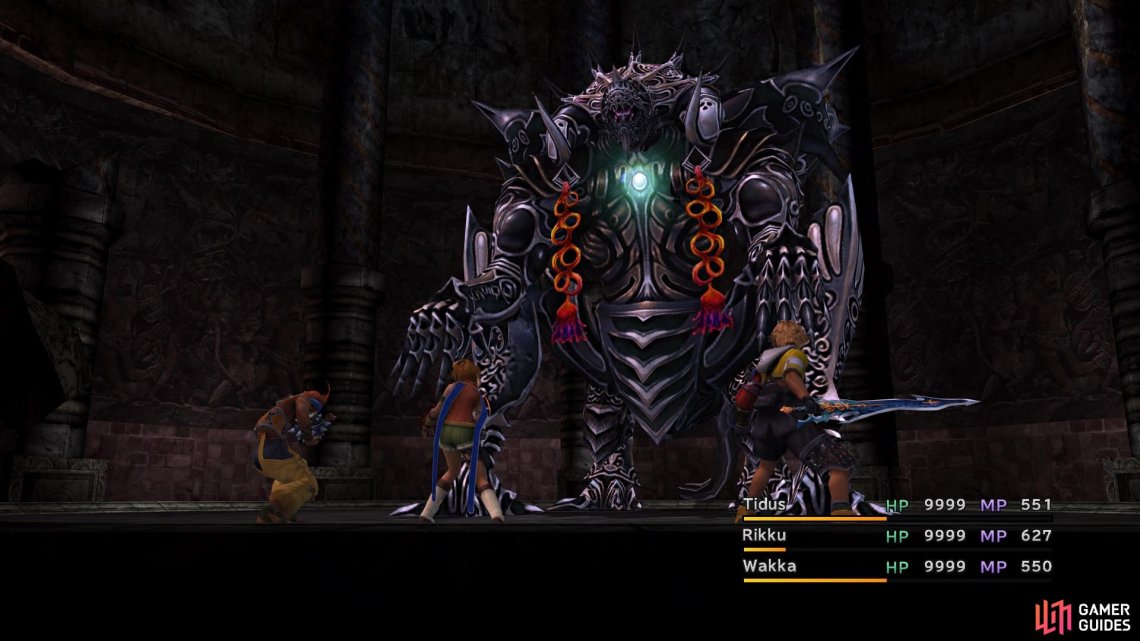 You can have Kimahri use Lancet on Omega Weapon to have him learn the Nova Ronso Rage.

Omega Weapon has ten times the HP that Ultima Weapon had, so if you don’t have Celestial Weapons at this point, you might be in for a very long battle. Also, Omega will absorb all elements, so you won’t be able to use magic on him, unless it’s non-elemental. Omega’s pattern will go through four phases, where he can either use a normal attack or a special one, with the special one pushing the next phase forward. The first phase will have Core Energy, which can deal upwards of 4,000 damage plus to a single character. Remember this is a magical attack, so having Shell on will reduce the damage.

The second phase can have Omega using either Confuse or Break, both of which can be detrimental in the long run. The third phase includes Shimmering Rain which hits the entire party for around 2,500 or so damage. The final stage will have Omega use either Demi or Ultima, with the latter being reduced by Shell. Note that Omega doesn’t just go through the stages one after another, as he can mix in physical attacks that won’t advance things. Besides all of the above, Omega Weapon does have one more attack, called Nova. This is separate from all the others, as Nova has a special counter.

This special counter will go up more if Omega uses normal attacks, while the special attacks make it go up a little bit. Once the counter reaches a certain threshold, then Omega will use Nova on the party, inflicting a lot of damage (upwards of 6,000+). The threshold for Nova is at 30, with specials contributing two and normal attacks adding five. Since you can figure out when it’s coming, you could summon an Aeon and have them Shield in order to reduce the damage. Otherwise, you simply have to take it and hope you don’t die, especially if your characters aren’t beefed up.

The usual buffs will work wonders here, so Haste, Protect and Shell will go a long way. If you have some Lunar/Light Curtains in your inventory, with access to Rikku’s Overdrive, you can steal some Gambler’s Spirits from Omega, then combine it with one of the previously mentioned items to get Hyper Mighty G, which puts on Protect, Shell, Haste, Regen and Auto-Life. That last one can be very important if you happen to see Nova. Other than the above, you can’t use elemental magic and Omega is immune to all ailments and Breaks. So, you’re pretty much stuck with physical attacks and non-elemental magic.