Near Airship : Save and move on. … Looks bigger from the inside than outside, eh?

Sea of Sorrow : God, I hate this area, with the whole “create your own map” thing. Head north and east along the path. Keep an eye on the minimap as you head east as a path to the north should open up. Go north, then west there. Hug the north side of the path as you do to reveal a path. Go along it (unknowlingly passing a fork to the east - don’t worry) to a “T”-junction with paths to the east and west. Go west first to another junction; hug the south side and you’ll find the southern branch. Run along it to find another junction; hug the west side to find the west branch from it yielding a Phantom Ring , then go east from there to a Special Sphere.

Be especially careful next to the Sphere, since the waterfall next to it brings you down a bit; the map remains as-is, though, so you can navigate. Go back to the that “ |– “ junction on the west side where we turned south earlier. Go north from it and you’ll find a “Y”-shaped fork; go northwest from it to find an Elixir , then go northeast and south along the path. If you hug the east side, you’ll eventually find yourself on a path to the east. Don’t go along it yet - I’m just using that as a reference for our bearings. In reality, you’re at a three-way intersection; to the south, you can grab a Wizard Lance for Kimahri first! Then go east and grab the Lv. 3 Key Sphere you can find by hugging the south side. 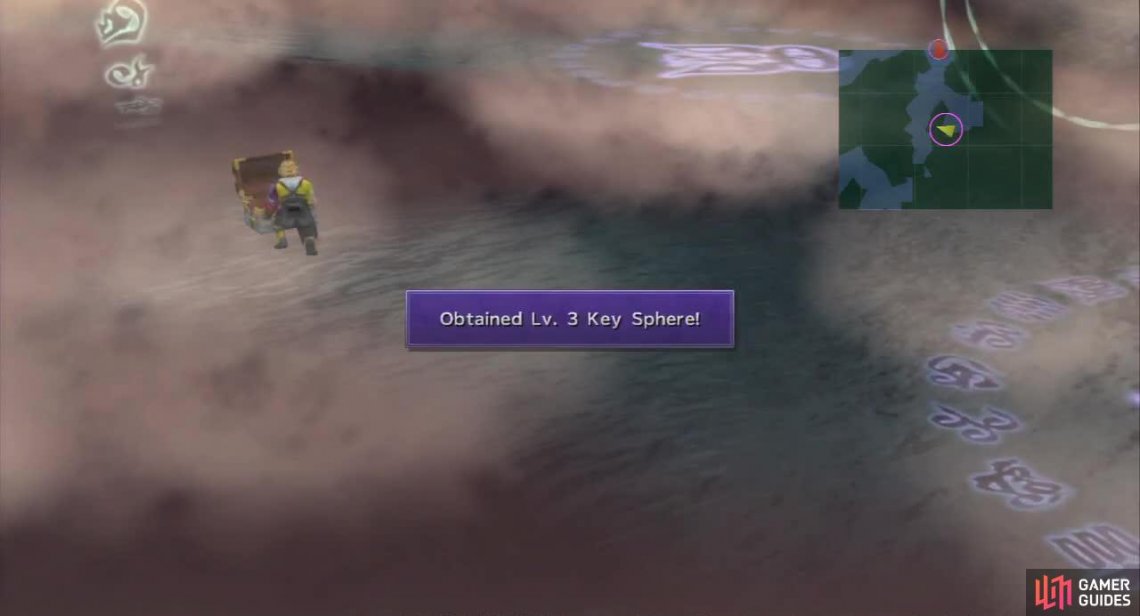 There are quite a few items scattered around here. Do a bit of digging to find them all.

From there, go north for a bit. Save at the Save Sphere, then go up the stairs.

BOSS ANALYSIS: Not much different than you’d expect, maybe. Seymour wields the main four elemental “-ra” and “-ga” spells, able to hit with each for about 1,500 damage or so. He can also use Ultima for over 3,000 damage, and Dispel to remove positive statuses from your whole party with every five actions against. What spells he uses is dependent on the Mortiphasm wheels behind him.

MAIN STRATEGY: This strategy allows pretty easy abuse of Seymour’s Dispel - all you really need to do is bring in Hastega and use Armor Break on Seymour to halve his Defense to 90.

Now, it turns out that Seymour is a lot easier than you’d think here. You remember how I said earlier about Seymour using Dispel as a counter for every five actions you take against him? With sufficient Agility and Hastega, that can be warped to your advantage. Simply use a lot of attacks or something (Quick Hit works really well!) to get him hit five or more times between each of his turns and he will always use Dispel on his turn rather than actually attack. Reinstill Hastega after and continue attacking. Dispel will occur, you use Hastega, you attack… It loops! The only problem is when Ultima comes up; you’ll have to heal for that, but it’s not likely to kill at full HP.

Seymour will use a variety of elemental spells multiple times which is punishing. You can take him out in one with a strong Overdrive especially if you have done many side quests.

Alternatively, you can just go for a real offense like most of you probably will. See that Mortiphasm wheel in the background? When it turns, you can tell EXACTLY what element Seymour will be using next; for the majority of the battle, you’ll want Yuna preparing a Nul spell for the next element or Curagaing damage from Ultima. Early battle set-up otherwise ought to include Hastega, Mighty G(uard) (or at least Shell on all), and Armor/Mental Break (depending on whether your offense is aimed for physical or magical damage; you’ll deal about 1.8x more damage through magic just based on Defenses).

After the set-up, begin doing whatever you want to do. If you were going physical, Quick Hit is the big thing to get in a lot of attacks, while pure offense works fine enough. If you were going magical - as you should - Flare and Ultima work well. If you don’t have those, you can cast the opposite of whatever Seymour’s going to cast. For example, if Seymour wants to cast Firaga, then Lulu should (double?)cast Blizzaga and Yuna should cast NulBlaze. Beyond that, reinstill at least Hastega whenever Dispel comes around - and it will - and heal when needed; it’s mostly a long grind.

ALTERNATE STRATEGY - ELEMENTAL EATER : Simple enough. If you’ve managed to customize Fire, Ice, Lightning, and Water Eater onto all of your armors, you will end up absorbing all of the magical damage - other than Ultima - that Seymour sends at you. The consequences, then, should be very obvious: he pretty much heals you, except for Ultima, for which you can heal with Curaga. Simply do that: lots of attacking with a Curaga on occasion.

The Destination of Hatred

City of Dying Dreams : This area is actually pretty linear, though there’s that whole “make your own map” thing again. Anyhow, go north while hugging the east side of the path; you’ll eventually go down a side path for the wall to will you something about killing 10 fiends (you can kill them any way you want, but WITHOUT Aeons). Beyond there, after you come back, will be another 10-fiend wall, then a 15-fiend wall. After this, you find a Lv. 4 Key Sphere beyond. … Really?

Go north some more on the main path and you’ll find a bluish platform that will raise you up to the Four-on-One weapon. Go back down and a bit northwest to find a pillar you can push down to find the Defending Bracer . Go north along the main path to find a hole in the ground where you can find a 20,000 Gil chest. Near to it is another rising platform you can use to go to another area. Go along the path there to find a dead-end (supposedly), but you can grab an HP Sphere and a Defense Sphere on the way. At the eastern part of the dead-end is another rideable platform that deposits you just north of the 20,000-Gil chest from before.

After disembarking, go far to the west of the 20,000-Gil hole for a good ol’ wall. Examine it to find a Megalixir beyond. then finally head east a bit along a narrow eastbound path. As you reach the open area, the camera changes a bit; head south when it does and you can find some paths around a bit of a wall. At the back of this section is a slide you can use to go to a Laevatein chest. Examine the wall nearby and climb with the X Button and you’ll eventually reach the next area.

There are hidden paths and walls hiding chests littered through the City. Examine everything!

Tower of the Dead : This will be the last Save Sphere you see for the rest of the game. Be sure you are the utmost prepared for whatever or whomever may come because, once you enter that tower, there is no turning back. It’s do or die.

Nucleus : In this area of Sin, your goal is to collect the ten items that pop up from time to time. You will actually gain items from these, though not necessarily in the order I found them: Attribute Sphere, Hrunting, Prism Ball, White Magic Sphere, Wicked Cait Sith, Skill Sphere, Mage’s Staff, Stillblade, Infinity, Knight Lance . If you touch the ice blades on the floor, by the way, you’ll have a battle - try to be quick and to perserve your stats…!