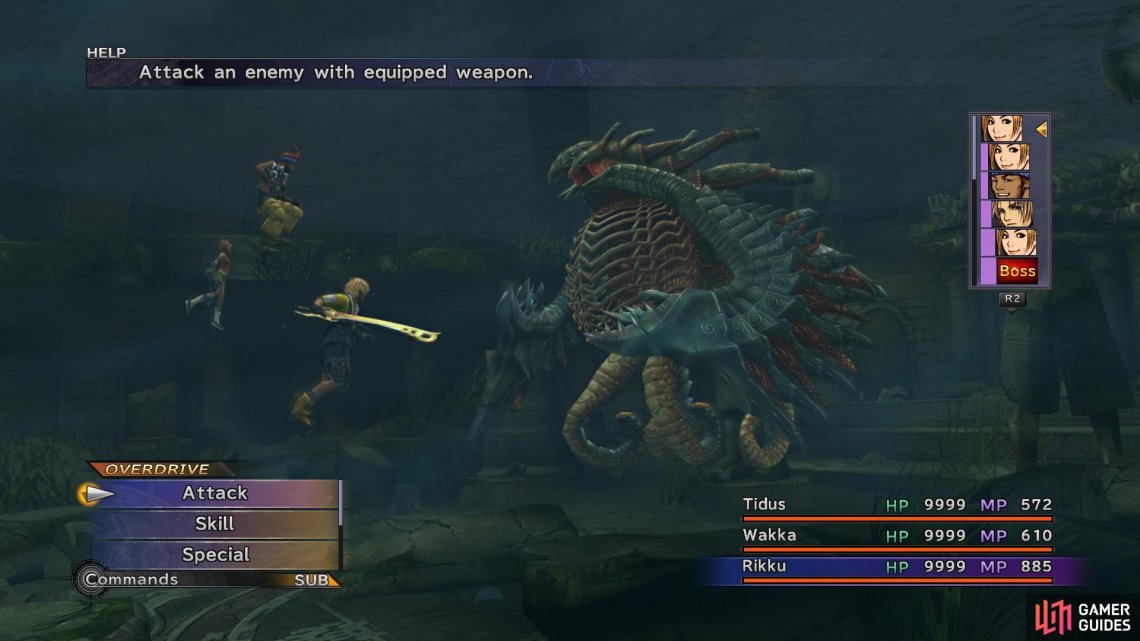 The first time you fought this boss, you only had Tidus and weren’t able to actually do much of anything to it. This time around, however, you will be able to finally bring it down. Depending on when you do this and how much you’ve improved your characters, this could be a challenging battle, due to some of the boss’ quirks. Remember that since you’re underwater, you will be forced to use Tidus, Rikku and Wakka for this boss. At the beginning of the battle, Geosgaeno will use Stone Punch to attack a character. This has a chance to Petrify, which is really dangerous, as petrified characters underwater will instantly shatter and be lost for the rest of the fight.

You can protect yourself by equipping armor with Stoneproof on it. Once the boss goes below half health, he will add KO Punch to the mix. This move will alway inflict the Curse ailment (no Overdrives), as well as possibly instantly KOing a character. After the boss attacks three times, it will swallow a party member and on spit out the character on its next turn, provided the character just defends. This will cause the character to only have one HP left, with the other characters taking damage equal to that character’s current HP, minus one. So, if they had 3,001 HP left, the other characters would take 3,000 damage.

As already mentioned, Stoneproof will help against Stone Punch, as will Death Ward/Deathproof against KO Punch. If your characters are powerful enough, they can defeat the boss before it has a chance to swallow someone. You could also cast Hastega on everyone to make sure they get more turns. Geosgaeno is weak to all elements, so you can blast it with magic or have an Elemental Strike weapon equipped.