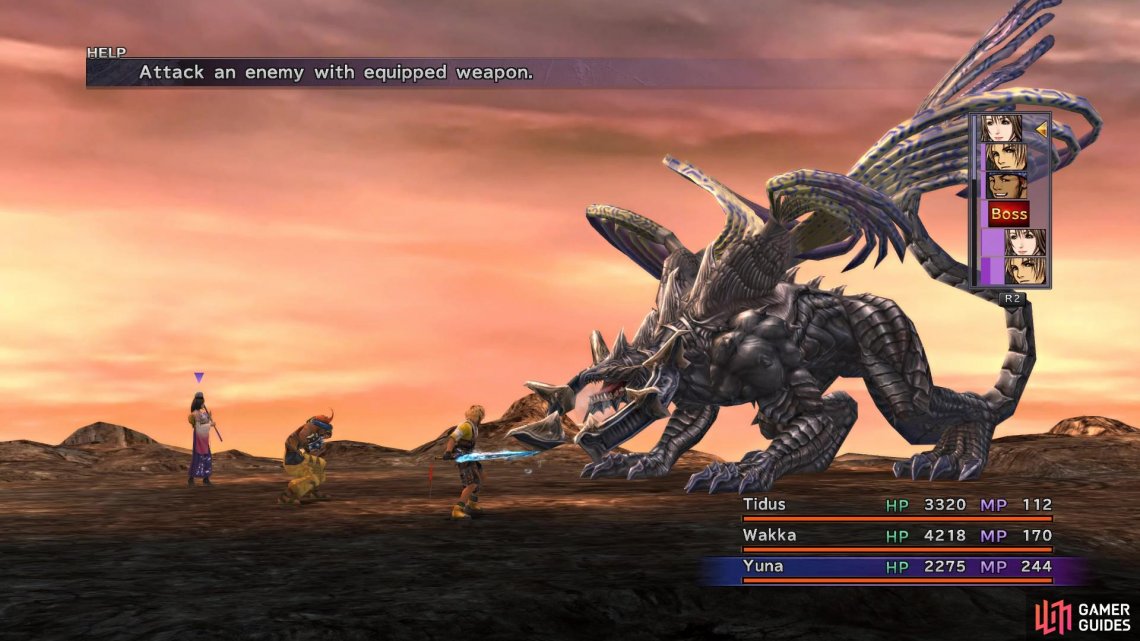 Sanctuary Keeper can be a troublesome boss, if only because of its one move, Photon Wings. It will always open with this attack, which does damage, but also inflicts Curse on your party. If you haven’t seen Curse before, it basically makes it so you can’t use your Overdrive. Aeons are susceptible to this ailment, too, so you will need to be careful. It can be removed with Dispel or a Holy Water, so it’s not all too bad. Also, in addition to Curse, Photon Wings may inflict Confusion, Darkness, Silence and Sleep. The best thing to do, at the start of the battle, is bring in Yuna (if she’s not) and have her summon an Aeon to take Photon Wings.

While it may get Cursed, it will be immune to the other ailments and you’ll save yourself from the headache. After using Photon Wings, it will use two normal attacks, then follow those up with Mana Breath, which hits a single character. The rest of the battle is a little weird, as the boss is able to cast Protect, but only if you use Armor Break on it. Likewise, if you inflict Darkness or Poison on Sanctuary Keeper, it can use Esuna to get rid of them. If you put Reflect on it, the boss can cast Reflect on one of your characters, then bounce the good spells off of them and onto it.

Note that the boss has access to Curaga, meaning it can heal itself; it can also use Regen and this should be Dispelled. As you attack the Sanctuary Keeper, there is a chance that it will counter with Tail Sweep and it gets to a point where the counter eventually comes out. This deals damage, can Delay character turns and it removes Haste. Lastly, if you put Slow on the boss, then it will counter this by casting Haste on itself. As you can see, there are a plethora of buffs it can use, plus Photon Wings can place a good number of ailments on your party.

Since Sanctuary Keeper is a bit preoccupied at the beginning of the battle with a script, you can use that time to set up. It’s a good idea to use an Aeon as a meatshield for Photon Wings, then spend the next three turns buffing your party. A Rikku Mix of a Mighty Guard variant is good, as is Kimahri’s Mighty Guard Ronso Rage. Putting Reflect on the boss is a good idea, though, to prevent it from buffing itself. While Reflect is active, you can use something like a Silver Hourglass to inflict Slow, causing the boss to reflect its Haste onto one of your characters. Note that the boss is not immune to Threaten and Shiva’s Heavenly Strike inflicts Threaten.