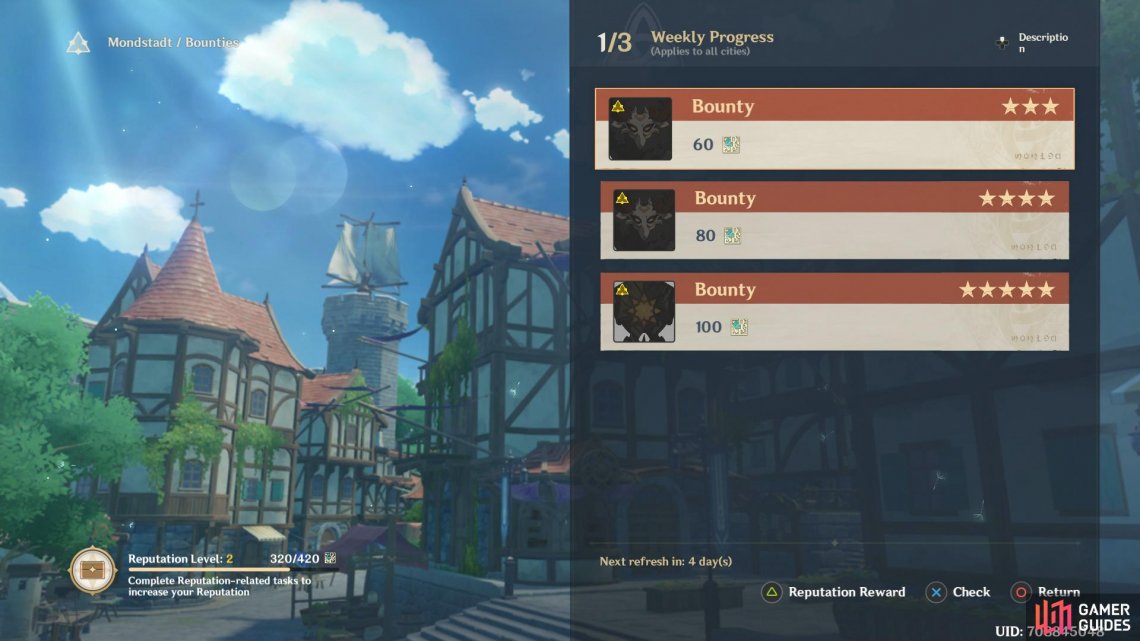 Bounties are a system which reward you with city reputation as well as other rewards. To accept a Bounty you must talk to Knights of Favonius Coordinator, Hertha who is situated a short distance north west of the Angel’s Share tavern. 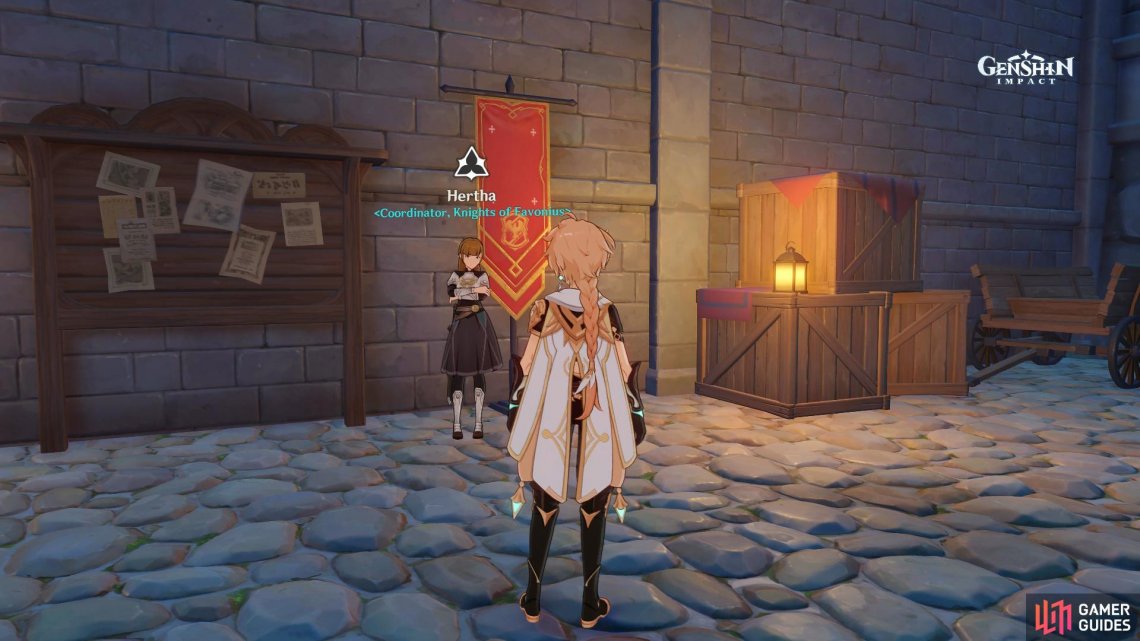 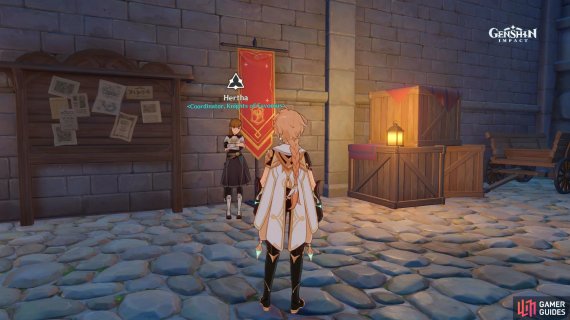 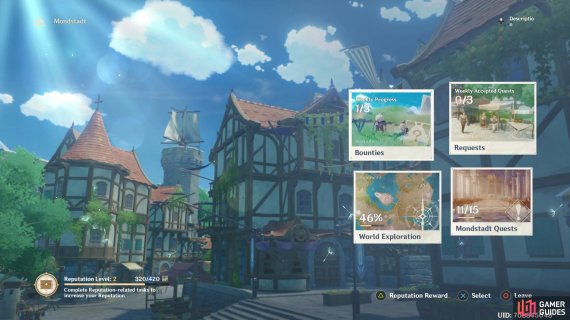 Coordinator Hertha can be found northwest of the Angel’s Share tavern (left), This is the City Reputation screen which can be accessed by talking to Hertha (right)

After talking with Hertha, you will be greeted to the city reputation screen which will have four options for you to choose from. Choose the top left option named Bounties which will take you into the Bounties menu. In here you will have the option of three Bounties, one 3 star, one 4 star and lastly one 5 star.

Warning: You can only take three Bounties per week across all regions.

By clicking on a Bounty, you will find information about your target which will give you “Target Intel” and a brief description of what the target looks like and you will be given the general vicinity of where the target was last seen. Also within the Bounty screen you will be given the “Target’s Special Traits” which will tell you what the monster is strong or resistant too as well as any weakness it may have.

After accepting the Bounty, go to your map and find the location which was described inside the Bounty Target screen and you will see a yellow circle indicating it’s general location. As soon as you enter the yellow circle you will be given a 10 minute timer to track down and kill your target. To do this you have to use Elemental Sight whilst inside the yellow cirlce and you will see a blue trail which will lead you to your first track. There are three of these tracks to find before the target will spawn, once you have three tracks, use your elemental sight again and follow the blue trail once more to reach the target. 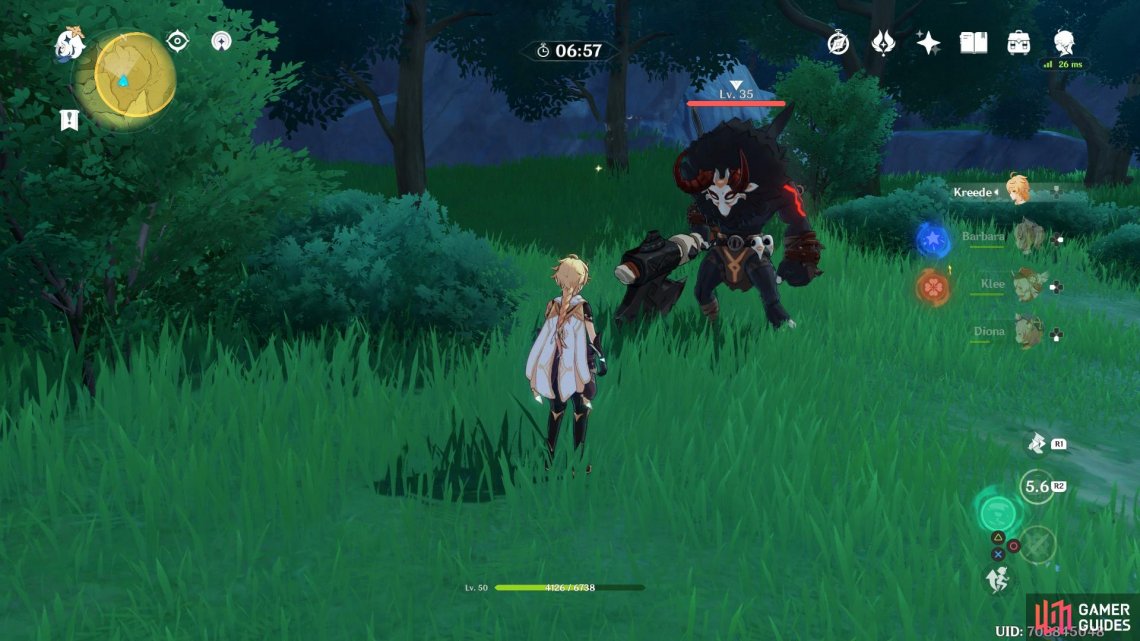 This means that Electro DMG will do zero damage to the enemy as it will be immune to it making Electro based characters all but useless other than their normal attack chains. 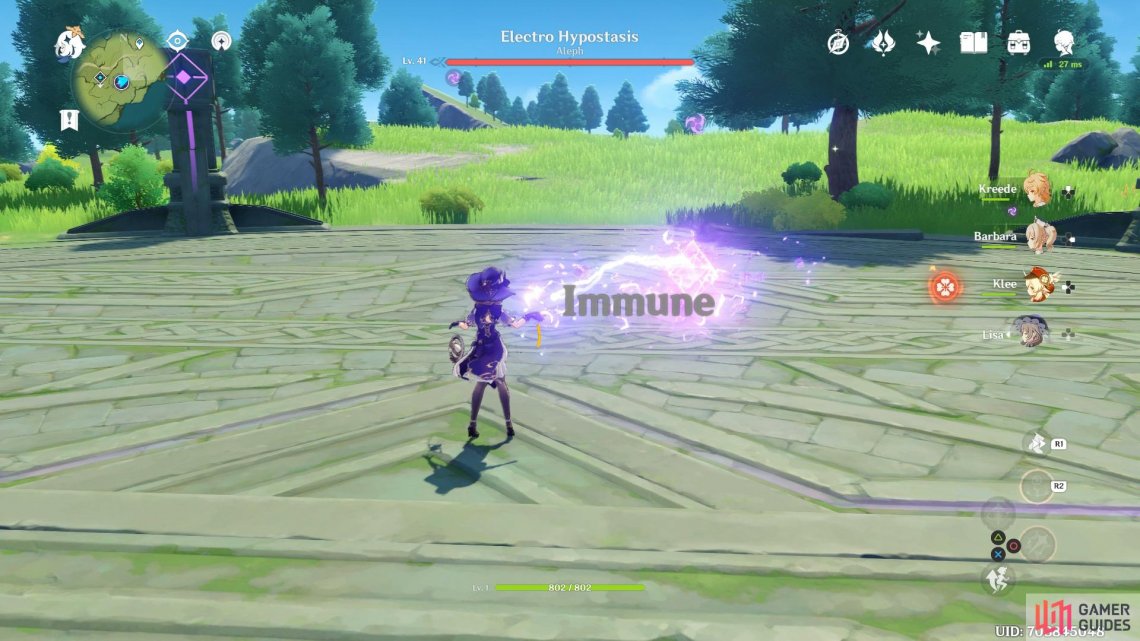 This enemy is Electro based and is immune to any Electro damage.

Using Hydro based skills such as Xingqui’s Guhua Sword: Fatal Rainscreen or Raincutter on the enemy will trigger Electro-Charged. Electro-Charged on it’s own is useless as it deals continuous Electro damage which the enemy is immune to but following it up with Pyro damage skills such as Klee’s Kaboom or her Jumpy Dumpty will trigger the effect Vaporize, this will make the skill that caused Vaporize to deal increased damage.

Note: Once Vaporize has been triggered, the effects of it will dissipate meaning you will have to trigger it again. 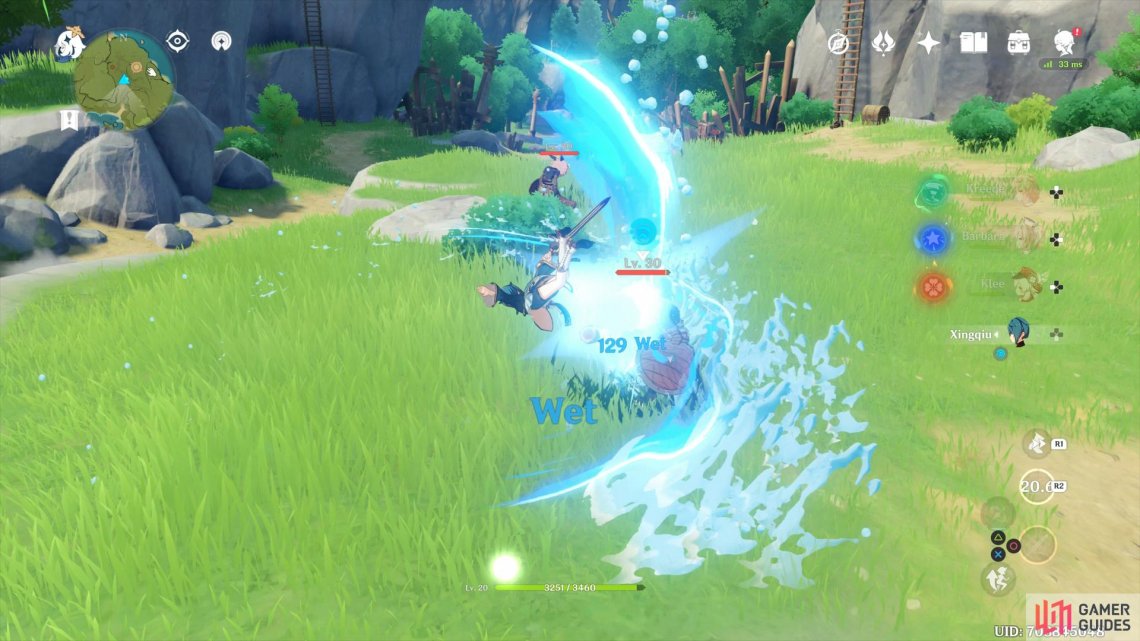 (1 of 2) Using any Hydro skill will cast Wet on to an enemy. 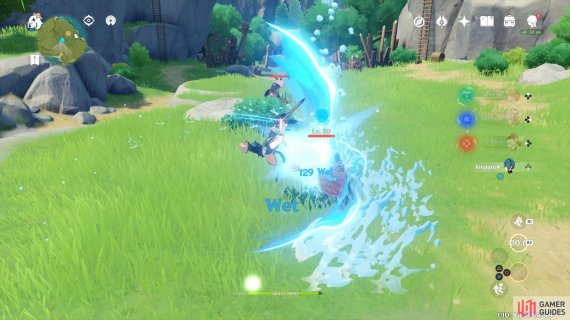 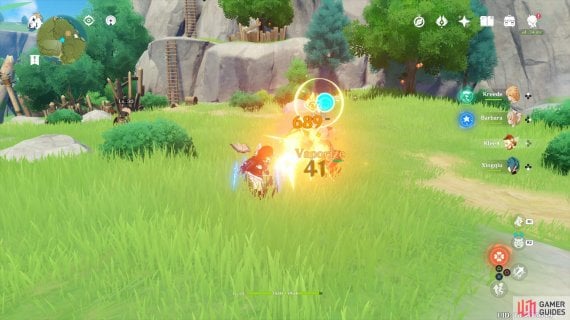 Using any Hydro skill will cast Wet on to an enemy. (left), Using a Pyro skill on to an enemy who is Wet will trigger Vaporize. (right)

Using Cryo based skills such as Chongyun’s Spirit Blade - Layered Frost on to an Electro enemy will trigger Superconduct which deals continuous AoE Cryo damage and it will also give the enemy DEF down. Using Pyro based skills such as Bennett’s Passion Overload on to an Electro enemy will trigger Overload which creates an explosion which deals Pyro AoE damage and break GEO shields. 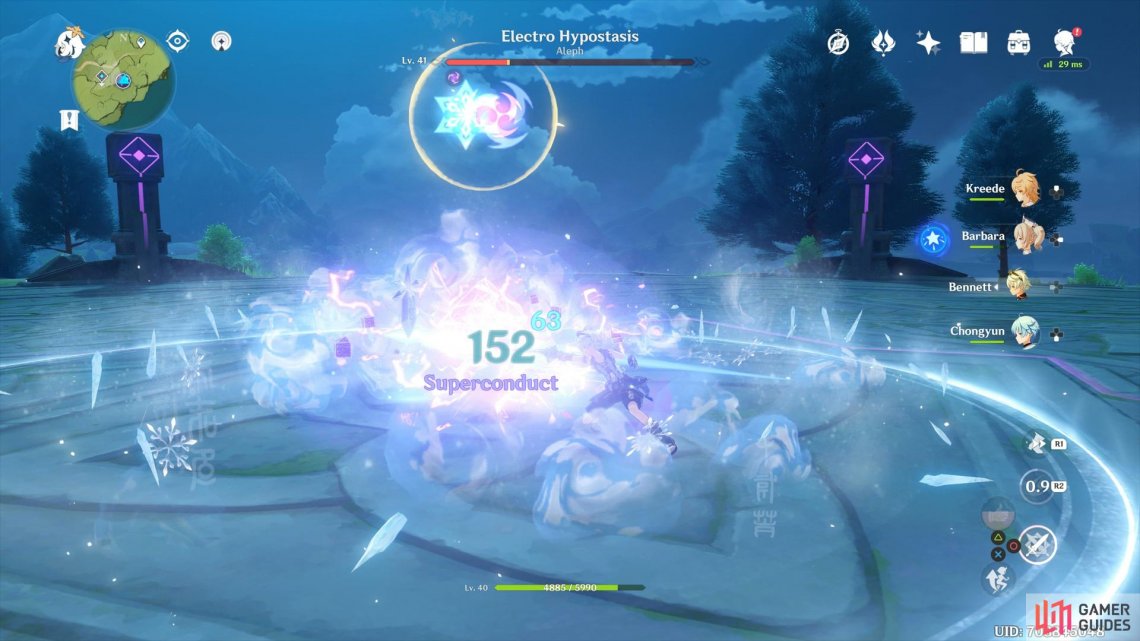 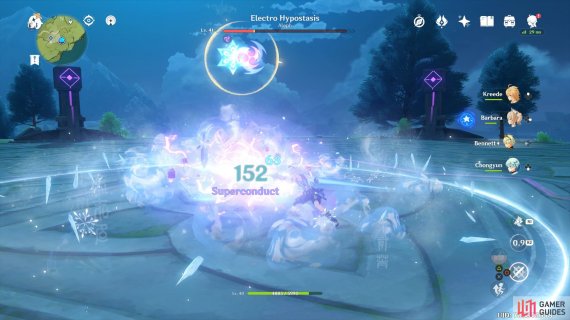 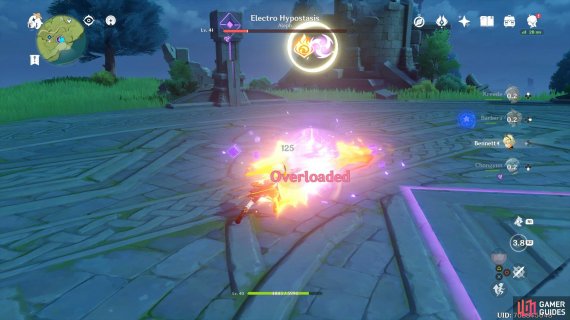 This means that Pyro DMG will do zero damage to the enemy as it will be immune to it making Pyro based characters all but useless other than their normal attack chains.

Using Hydro based skills such as Xingqui’s Guhua Sword: Fatal Rainscreen or Raincutter on the enemy will trigger Wet, follow that up with Chongyun’s Spirit Blade - Chonghua’s Layered Frost will trigger Frozen which stops the enemy from moving. Attacking with a Claymore or using a Geo skill on a Frozen enemy can sometimes trigger Shatter for some nice damage. Although it doesn’t display the word shatter like other status effects it’s damage is calculated as Physical damage and is scaled of your character level and elemental mastery. 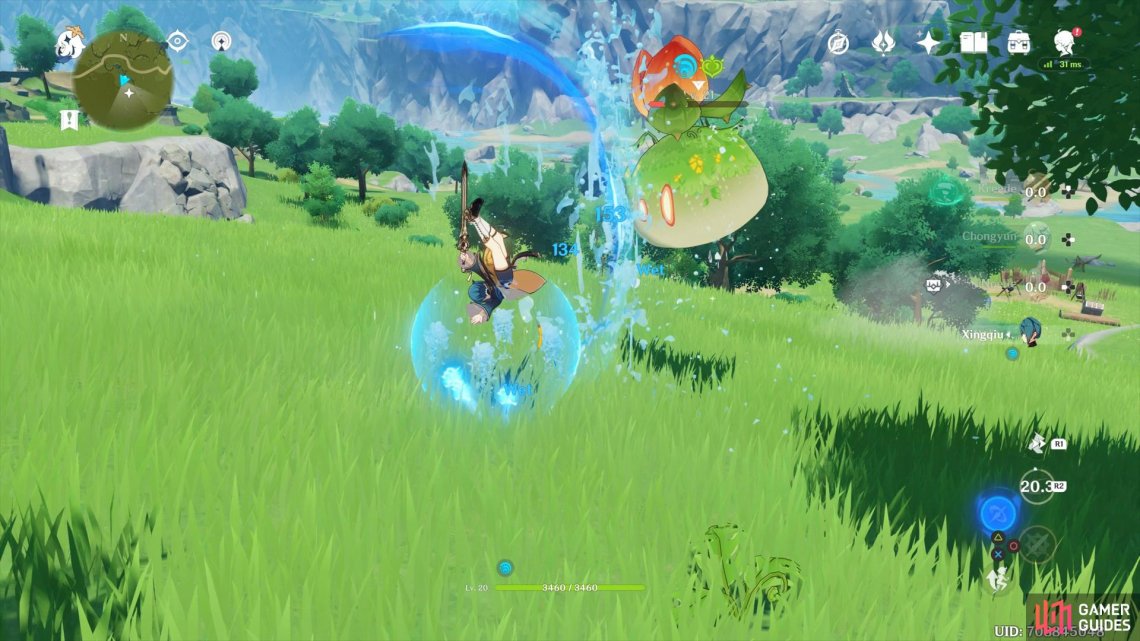 (1 of 3) Xingqui’s Guhua Sword - Fatal Rainscreen is a great skill to apply the Wet status.

This means that Cryo DMG will do zero damage to the enemy as it will be immune to it making Cryo based characters all but useless other than their normal attack chains.

Using Pyro based skills such as Bennett’s Passion Overload will trigger Melt, follow that with the Traveller’s (Anemo) Palm Vortex and it will trigger Swirl. Swirl absorbs the first element it comes in contact with and deals bonus damage. 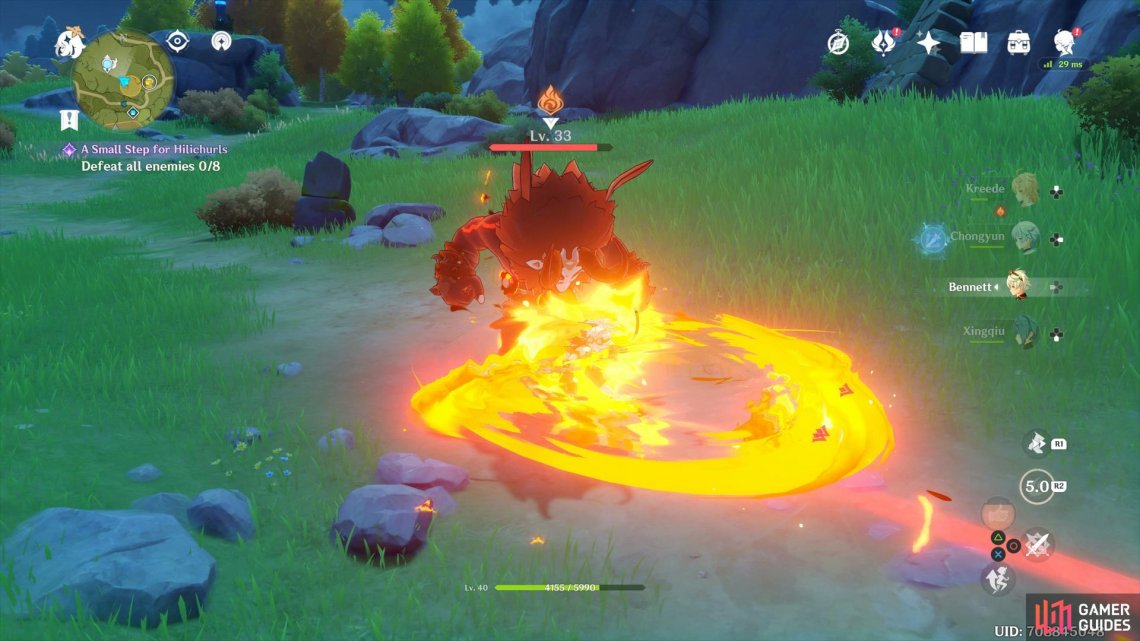 (1 of 2) Bennett’s Passion Overload is very good for putting enemies on fire. 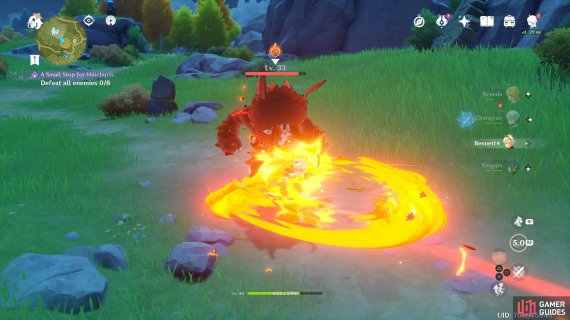 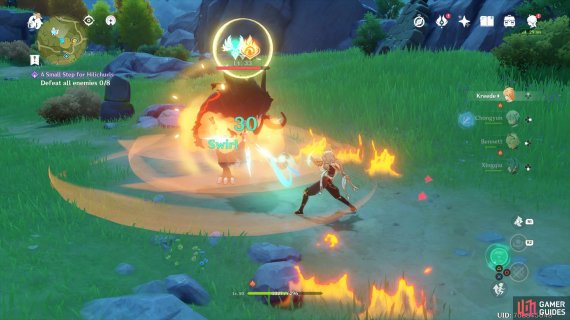