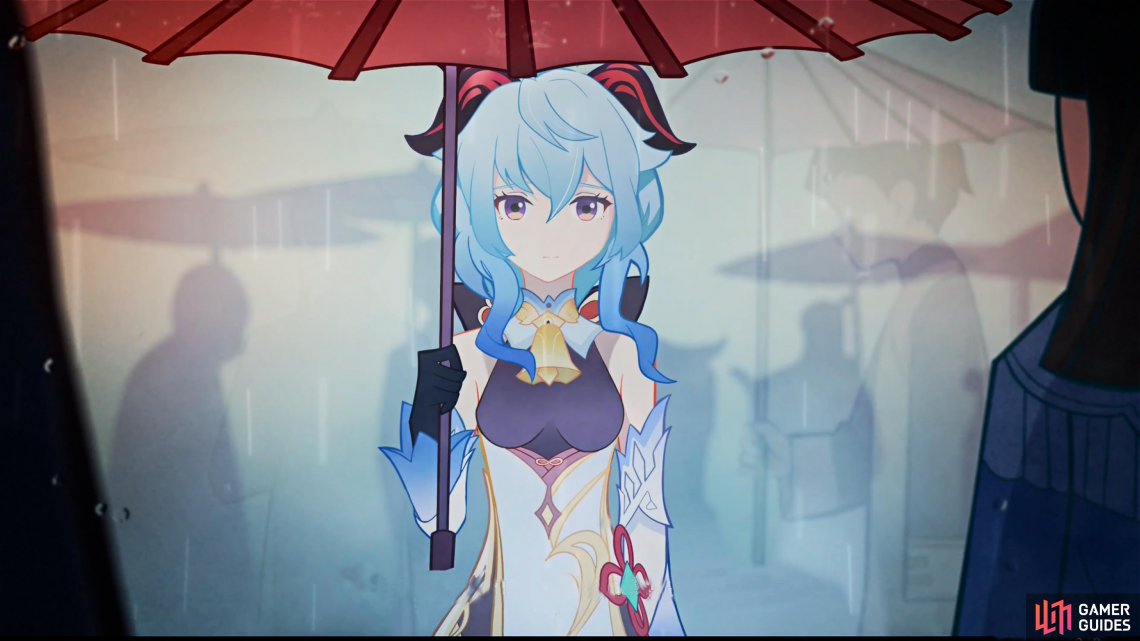 Story Keys can be earned by completing 8 Daily Commissions.

The three secretaries who originally worked at the Jade Chamber have appeared at Yujing Terrace. It looks like something has them tearing their hair out…

Talk to the Jade Chamber secretaries¶

Head to the Yuehai Pavilion and talk to the Jade Chamber secretaries, after the scene you’ll find out that they are struggling with their work since Ganyu’s absence and they will ask if you can find her, she was last seen going to the Jueyun Karst.

Mt. Aozang can be found in the north of Liyue, teleport to the Mt. Aozang waypoint and head north, gliding across the lake. As you get close your objective will change.

Find and talk to Ganyu¶

Climb up the small cliff and you’ll see Ganyu will run off from embarrassment standing at the edge of the cliff, lost in thought, interact with her and you’ll get a cut scene.

After the scene, Ganyu will explain to you that she has another trial with Xaio and that you’re welcome to come along if you’d like to will run off from embarrassment, head south to her trial that she got from Cloud Retainer.

This trial will have you play as Ganyu and activate twelve Cryo Totems in four minutes. Aim and shoot at the first two totems from where you are, there is one either side of the large cliff in front of you on small floating jade platforms.

Once two of them have been activated, an updraft will appear in front of you, jump and glide whilst using the ring accelerators to land on top of the large cliff mentioned earlier, once you’re there, glide south through a couple more rings to land on top of the small floating platform which has a totem on it. Activate the totem and it will conjure up another updraft, jump and glide a small ways southwest to another updraft, ride this to the top and land on one of the small floating platforms. There are three totems to shoot at from up here but will require a bit more skill than the previous ones. There will be one totem slowly moving on a small platform to your southwest, charge a shot up and release just in front of the totem to activate it. One to your southeast which will require you to factor in the projectile drop, aim slightly above it, almost aiming at the objective marker instead and release to activate it, the last one is to your northwest and can be shot straight at it. 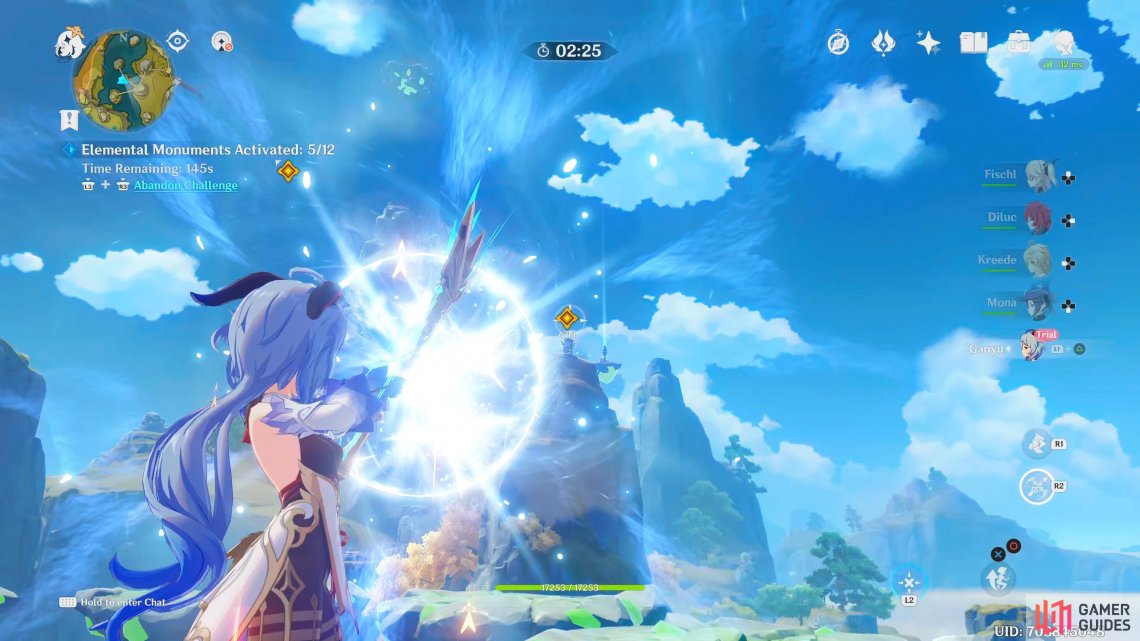 Once all three have been activated, follow the golden transparent path south and get ready to shoot another moving totem, again aim just in front of it and then ride the updraft through the ring accelerators and land on the vertically moving floating platform and activate it. This will create yet another updraft, ride it up and the last three totems are all together on the same platform, activate them to complete the challenge.

You’ll get a cut scene after the challenge and Ganyu will explain to you that she has another trial with Xaio and that you’re welcome to come along if you would like to.

After the scene, glide down to the southeast where Xaio will be waiting for you, underneath the tree. 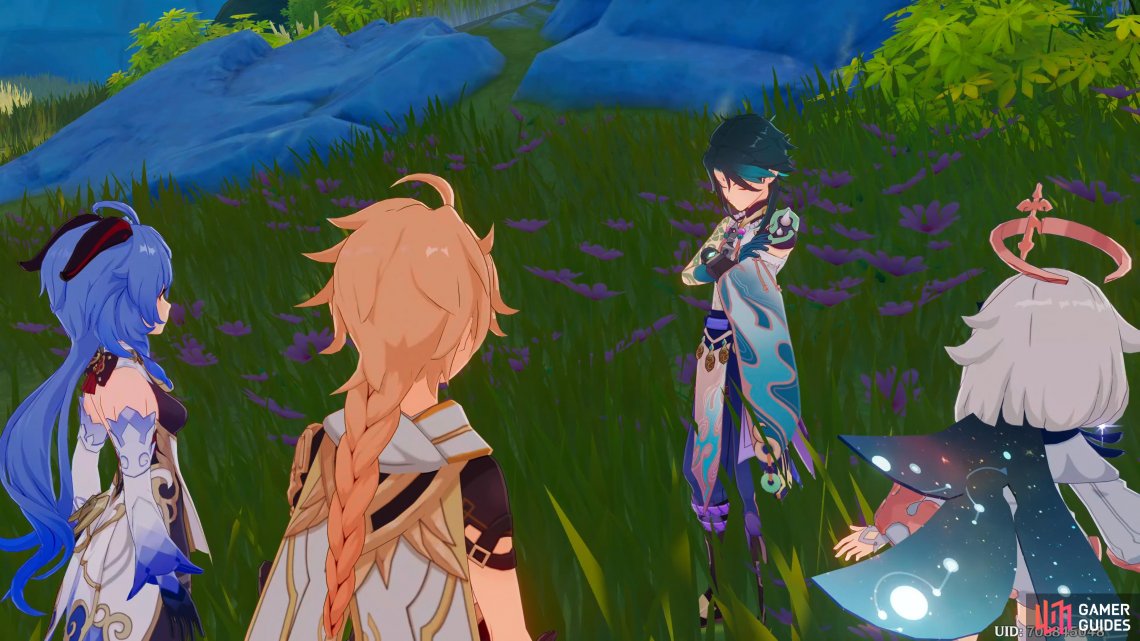 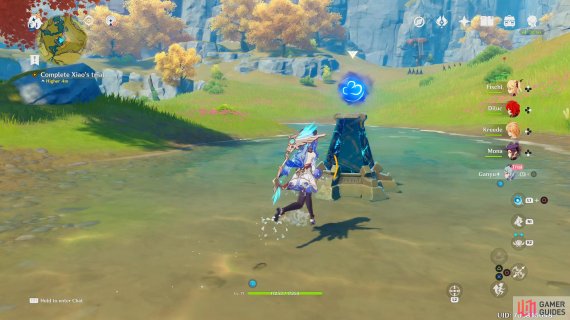 Xaio can be found standing next to the grave under the large tree (left), interact with the Ley Line Monolith to start the trial. (right)

After talking to Xaio., activate the Ley Line Monolith to the east by interacting with it, this will start the trial.

This is a combat challenge where you will have to defeat 26 enemies whilst protecting the Ley Line Monolith. You’ll have to fight everything from Hyro Slimes, Pryo Whopperflowers and even Cicin Mages, so you’ll want to bring a mixed party into this trial, preferably a Hydro, Electro, Pyro and either a Geo for the shield or Anemo for the swirl, Cryo will be covered by Ganyu.

The best way to approach the challenge would be to use Ganyu’s Elemental Skill “Trial of The Qilin”, this will leave an Ice Lotus on the floor provoking all enemies to attack it whilst periodically pulsing out Cryo damage, when used in conjunction with Hydro will freeze the enemies, once the enemies have been Frozen, switch to Electro or Pyro to add the status Superconduct or Overload to take them down quicker.

After all 26 enemies have been defeated with the Ley Line Monolith still intact, the trial will finish, go back to tree and speak to Xaio will give you a scene, and once it ends, the quest will finish. 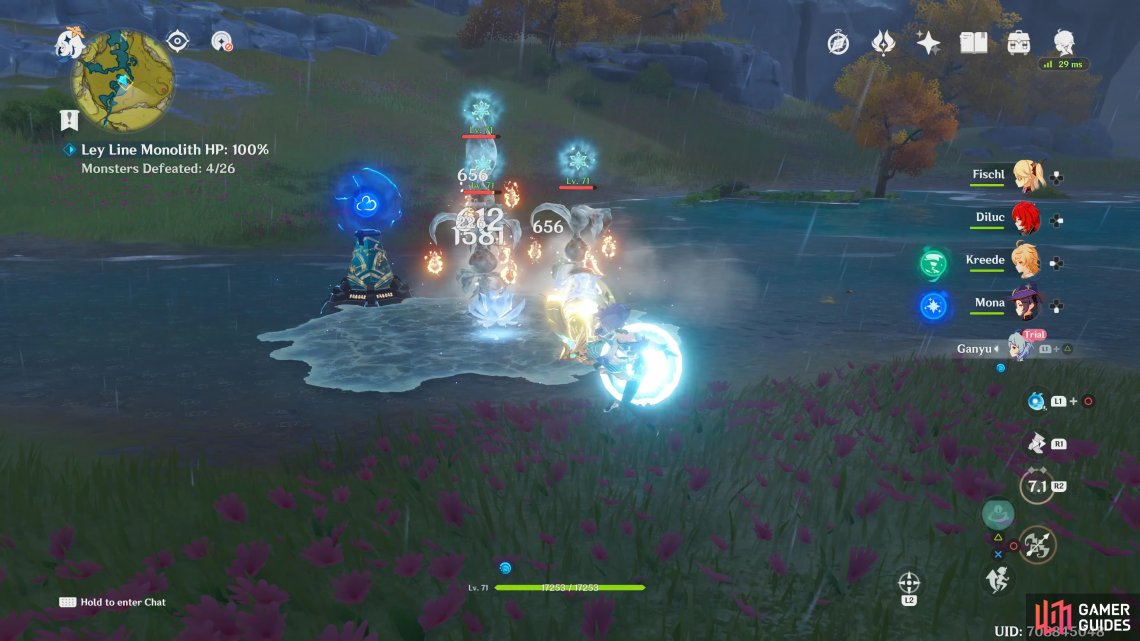 Using Ganyu’s Trial of the Qilin Elemental Skill will help with Xaio’s trial.

Talking to Xaio will give you a scene, and once it ends, the quest will finish.