This quest cannot be completed while the Archon Quest “Rite of Descension” is active.

Did you know that this ship is called the Alcor and it’s the flagship of the Crux Fleet that is commanded by our very own Beidou?

This Quest isn’t accepted like the majority of the quests. To begin this quest you will need to fly over to the ship “Armed Ship” which will instantly give you a cut scene when you get on the deck. 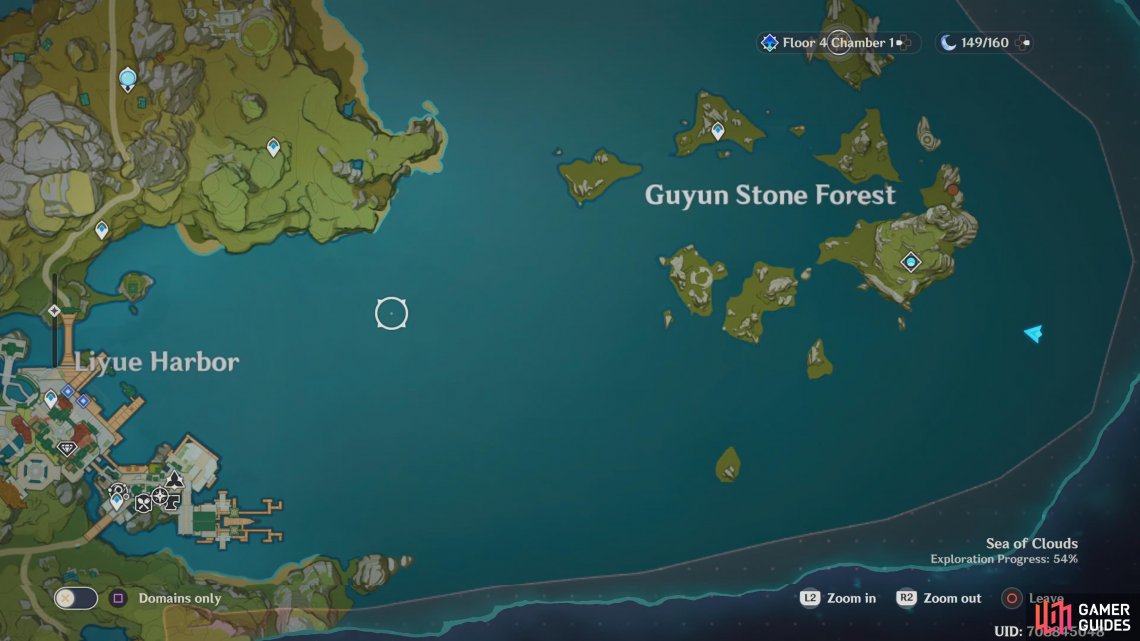 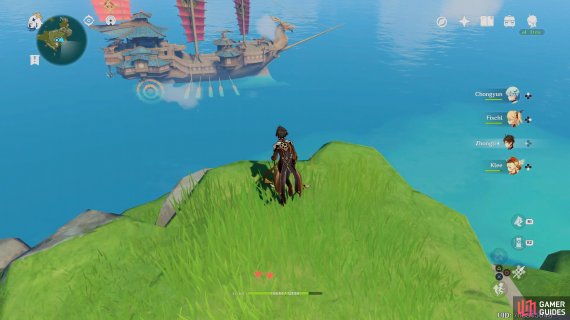 The Armed Ship can be found south east of the Domain of Guyun (left), to the east of that domain are some cliffs you can climb and jump from to glide over to the ship. (right)

Note: Make sure you bring three Starconchs and three Raw Meat before going on to the ship, this will save time later.

You will not make the distance by traditional means due to the lack of stamina, there are a few ways to get around this. By bringing two Anemo characters, this will give you a buff which decreases stamina consumption by 15%. Bringing Amber will decrease stamina consumption when gliding by 20%, bringing some Delicious Northern Smoked Chicken which restores stamina by 60 and can be used whilst gliding or swimming. Another way to get to the island is by using Cryo characters such as Kaeya or Chongyun to freeze the water and walking across but this can be time consuming, the easiest way to get onto the ship is by gliding over from the cliffs above and to the east of the Domain of Guyun, and then using the rope to climb onto the deck of the ship once you reach it.

There is a Seelie which can be led up the cliffs mentioned above which will lead you to an Exquisite Chest.

Tip: Northern Smoked Chicken has a cooldown of 300 seconds. If you are swimming you can stop and wait the timer out if your stamina is low.

Talk to all the people on the ship¶

As you get to the Armed Ship and onto its deck, you’ll have a cut scene which will start the quest. Juza will ask why you are intruding on their ship and demand you offer help around the ship to avoid walking the plank.

Talk, to Suling, Sea Drake, Xu Liushi, Furong, Mora Grubber and then finally Little Yue and Yinxing, they will all tell you that you’re not welcome on the ship other than Little Yue and Yinxing, standing at the top of the stairs leading to the cabin. She will ask you to take a letter to Bolai who is also in Liyue Harbor, now teleport to the Harbor and you will find Changchang and Bolai near each other just below this Teleport (Bolai is underneath where Changchang is standing) and deliver their items and then head back to the “Armed Ship” the same way you got there the first time. 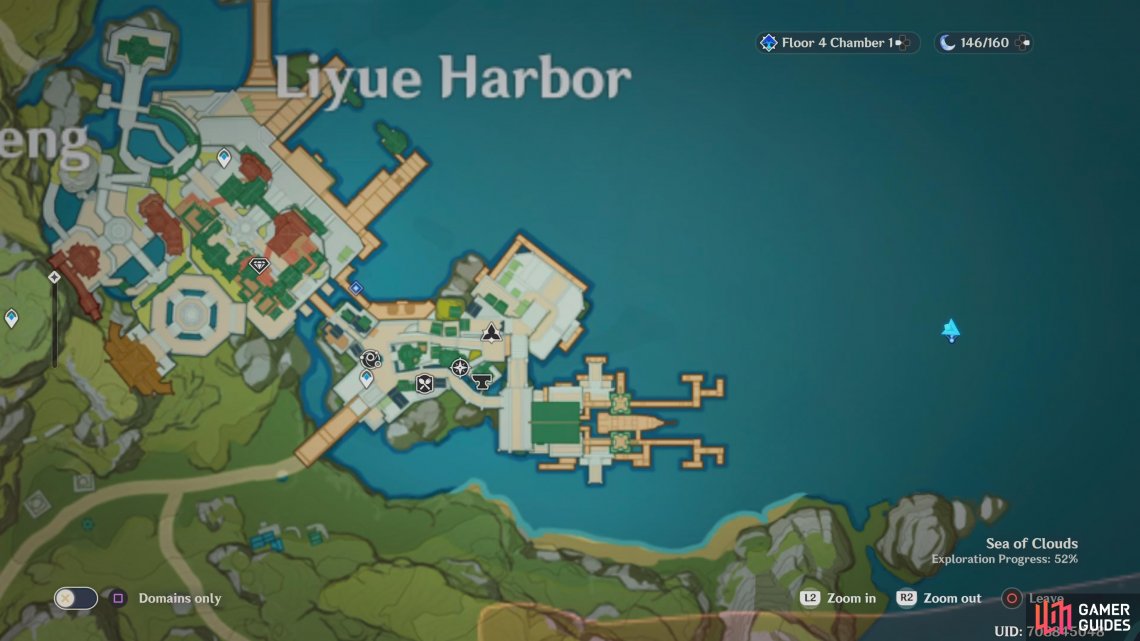 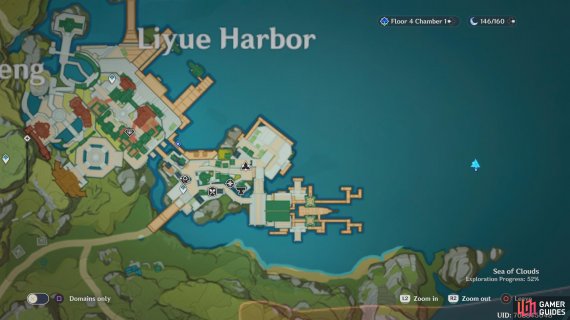 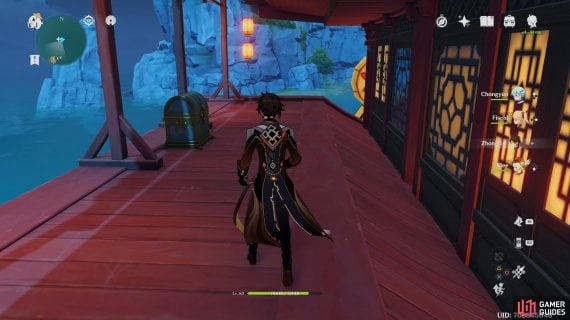 Chaoxi can be found on a bridge dividing Liyue Harbor (left), you can find a Luxurious Chest at the back of the ship. (right)

Note: There are several chests on the ship, two common chests and one Exquisite Chest can be found next to Mora Grubber (Ignore her telling you to leave them alone) and a well-hidden Luxurious Chest on top of one of the masts, you can get this by jumping onto the flags via the raised platform at the back and then gliding over to it, this contains a Berserker’s Rose in it and 10 Primogems. There is also a Geoculus on top of the tallest mast, reached the same way. 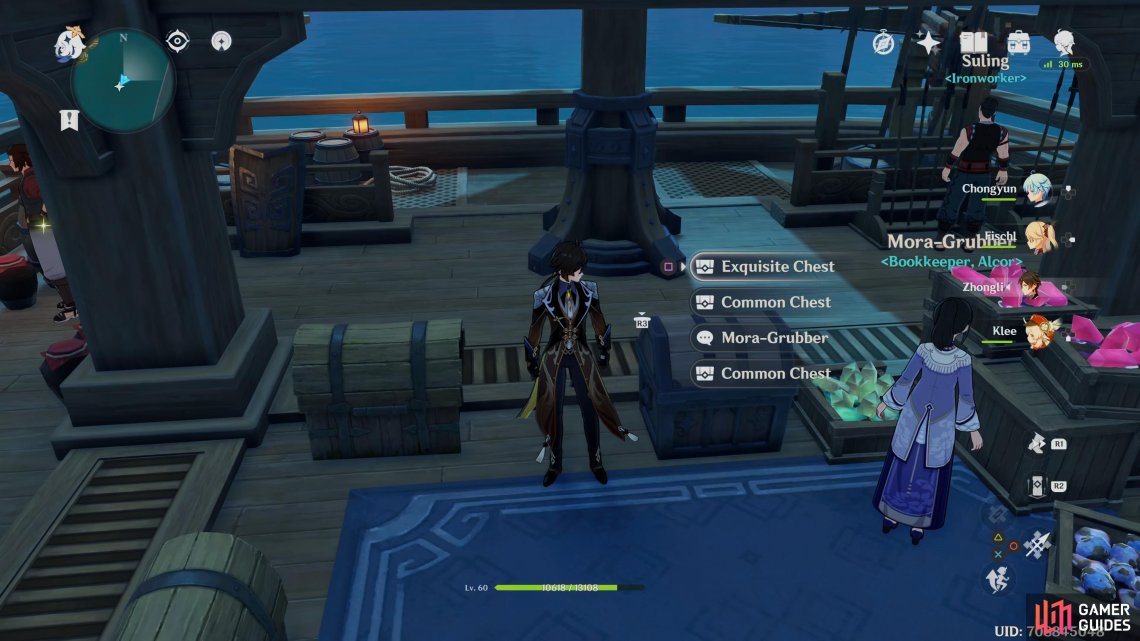 Little Yue will ask you to bring him three Starconchs, if you haven’t brought these with you already then look around the coasts of Guyun. After giving them to him, he will ask you to deliver it to Changchang in Liyue Harbor, don’t do this straight away and talk to Yingxing Standing at the top of the stairs leading to the cabin, Yingxing will ask you to deliver a letter to Bolai who is also in Liyue Harbor, now teleport to the Harbor and you will find Changchang and Bolai near each other just below this Teleport (Bolai is underneath where Changchang is standing) and deliver their items and then head back to the “Armed Ship” the same way you got their the first time.

Juza will tell you that they want to eat some different food due to them being stranded at sea for a long while and the food in question is Raw Meat, you should have some on you but if you don’t, you’ll have to farm some boars, foxes or squirrels around the world or you can purchase them from Draff, near the pond at Springvale. 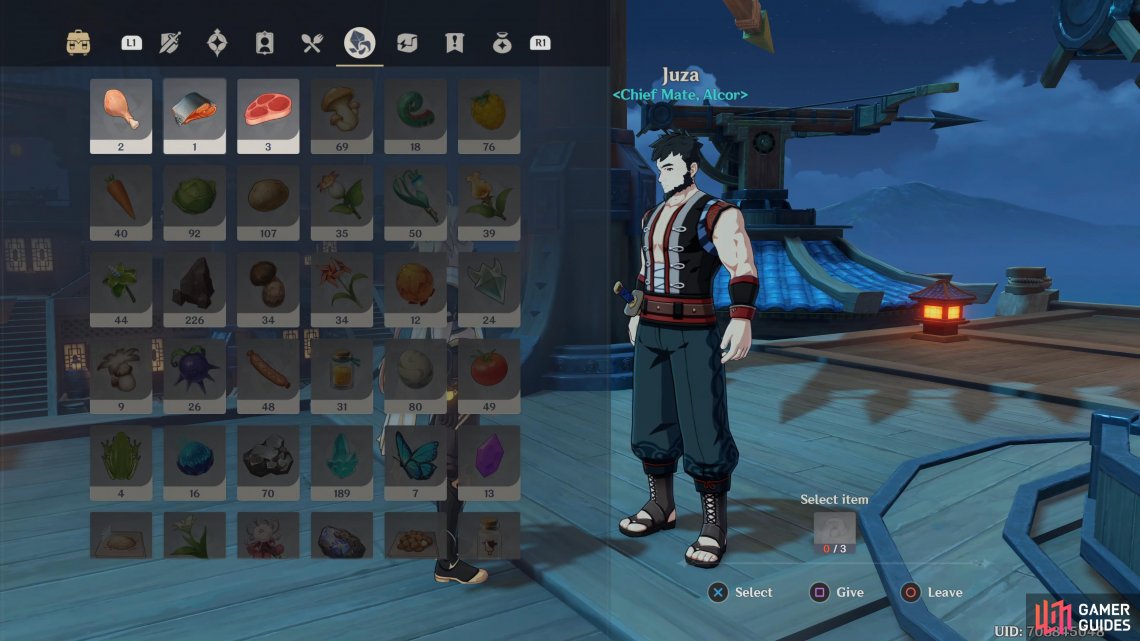 Once the meat has been obtained, speak to Juza again and that will finish the quest.