Once you’re through the second gate, you’ll need to find Tedmund. Use Odin’s Sight to highlight the location in the keep where you’ll find him. You will have to climb the walls to the north until you reach the top of the keep. Here you will find Tedmund waiting.

As soon as you approach Tedmund, the fight will begin. As he wields a shield and a flail, it’s not recommended that you mindlessly spam light attacks. Instead, you’ll need to use heavy attacks to break through his shield defences, then quickly follow it up with a light attack before he reaffirms his shield stance. The one exception to using light attacks is when Tedmund is mid-swing with his flail. Any light attack here will interrupt him and land a successful hit. Same with a shield attack. Turns out the flail and shield isn’t a great combo.

Tedmund will sometimes switch between flail and shield during the fight. When he wields the shield in his main hand, this won’t do much damage but it can knock you back. Tedmund has no special attacks, so you can expect only basic ones from both of these weapons. 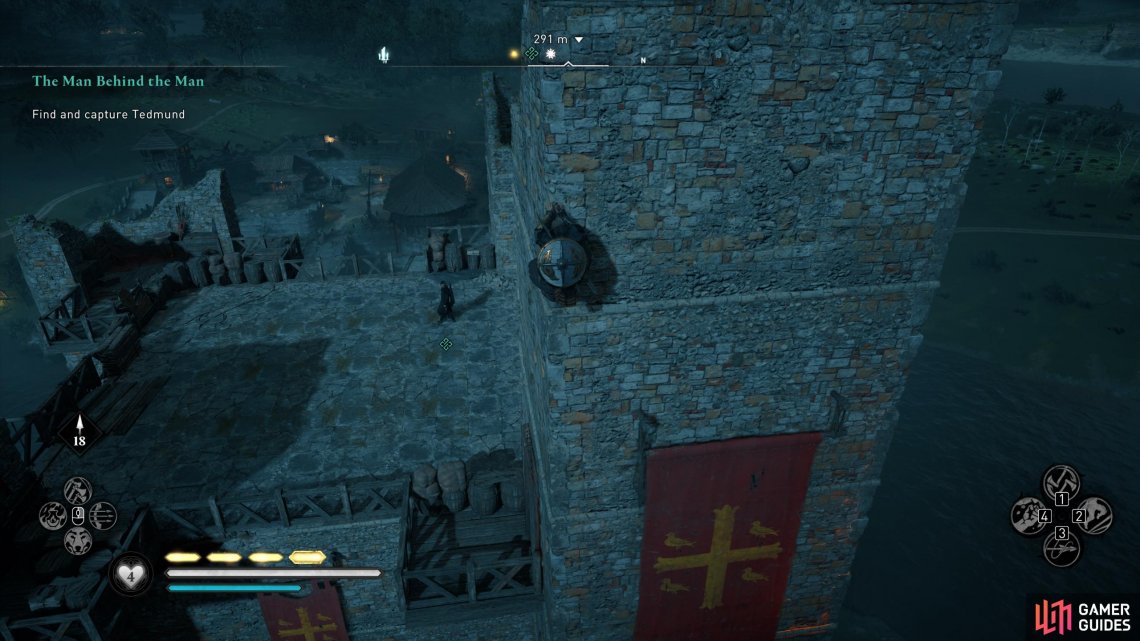 If you leave too much distance between Eivor and Tedmund for too long, he will throw one or two throwing knives at you. These don’t do much damage so don’t be too concerned about them, but it’s worth trying to avoid them with a dodge nonetheless. All in all, Tedmund is a predictable opponent and you can easily avoid most of his attacks even by running past him. If you flank him after he’s committed to a flail attack, you can easily hit him in the back for increased damage and a potential knockback if you have the Backstab skill. You’ll find weak points on his left arm, right arm, and left knee.