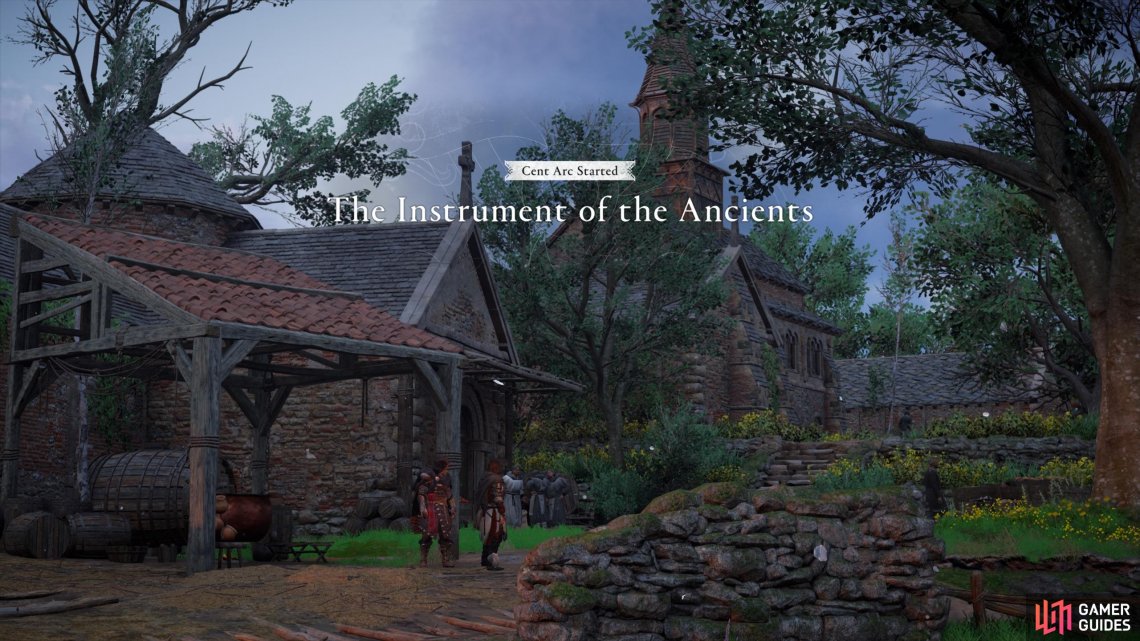 This quest begins once you have pledged to Cent from the alliance map in your longhouse at Ravensthorpe. When you leave the room where you spoke with Randvi over the alliance map a brief cutscene will play, during which Dag states his intention to remain in Ravensthorpe. You can insist that he joins or tell him to do as he pleases, but either will result in the same outcome of him refusing and walking away.

When you’re ready, travel to Cent and speak with Basim at Saint Hadrian’s Priory, in the northern lands of Cent. If you’ve never been to Cent before, one of the quickest ways to get there from Ravensthorpe is by fast travelling to the Lunden docks, and then making your way southeast from there. If you want a more scenic route, you can sail your longship the entire way instead. 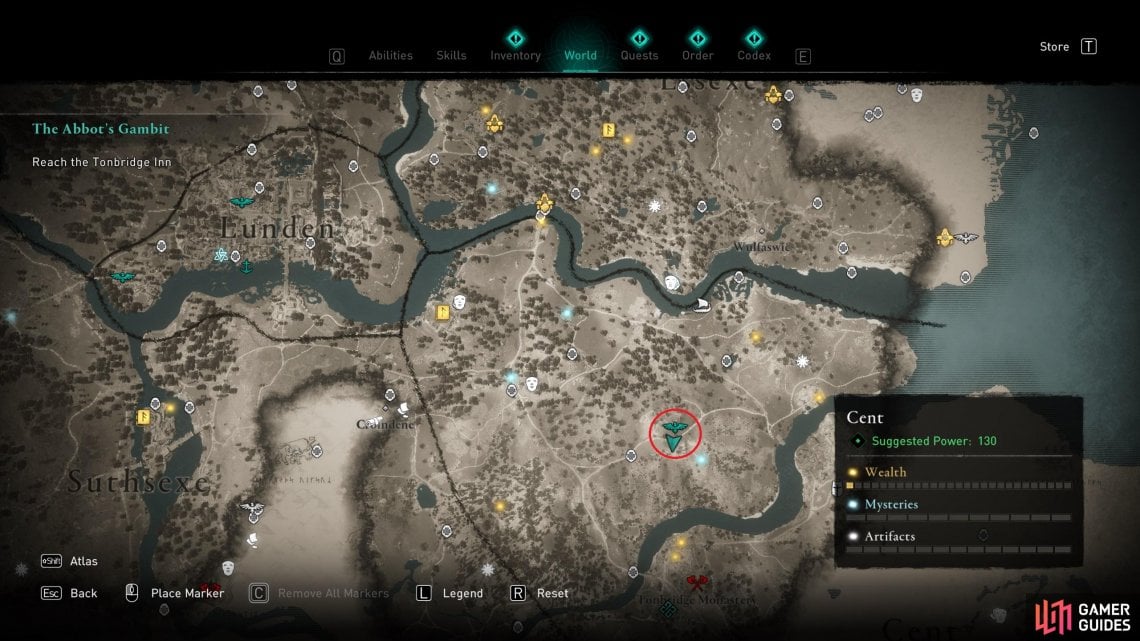 The location of Saint Hadrian’s Priory, where you’ll find Basim.

As you arrive at the priory, you’ll find Basim speaking with a monk outside. Approach them to initiate a cutscene. At the end of the scene, you’ll have a few dialogue options with Basim. It doesn’t matter which one you choose, as the same dialogue will play out. Follow Basim after the scene to meet Cynebert. A few more dialogue options will present themselves, but all lead to the same outcome.

Once you’re done with Cynebert, travel south to the Tonbridge Inn, just southwest of the Tonbridge Monastery. When you arrive, be sure to use Odin’s Sight to highlight the houses that you’ll need to explore for information. The house on your left as you approach from the north contains a man who won’t be willing to provide information at first, but you can obtain it by bribing him with 165 silver, threatening him with violence, or charming him if you have at least level 3 charisma. Alternatively, you can enter the locked room in the house to your right (south) by shooting through the window at the lock. You can speak to the men inside without needing to persuade them.

However you get the information, once you have it you’ll need to speak with a drunken bard nearby. You’ll find him under the bridge to the northwest. If you need help identifying the precise location, use your raven to scout the highlighted area. You’ll find that the bard isn’t sober enough to provide you with any useful information, so you’ll need to sober him up. You can do this by carrying him to the river nearby, and throwing him into it. Once he’s out of the water, speak with him. He’ll attempt to bribe you for the information you require, but don’t bother paying it. Just pursue the other dialogue options until you get the information you need. 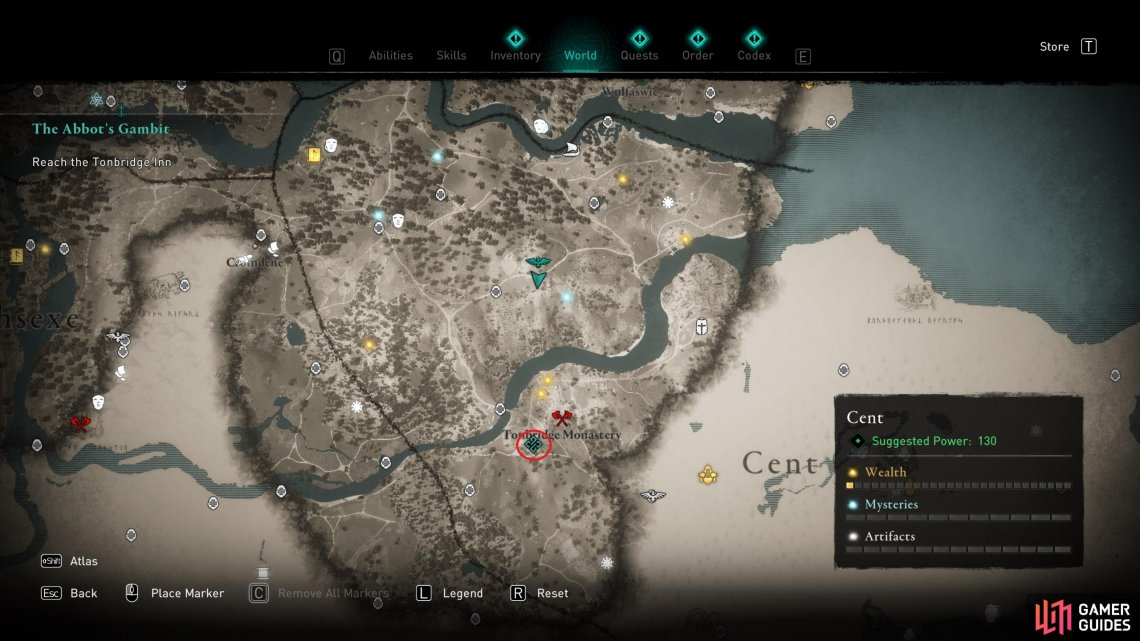 (1 of 7) The location of Tonbridge Inn, south of Saint Hadrian’s Priory.

Find the Emissary at Dover Fortress¶

When you’ve extracted the information regarding the location of the emissary from the bard, you’ll need to travel to Dover Fortress on the southeast coast of Cent. Since you’re by the water at the bridge, you can summon your longship to sail around the coast, or you can choose to travel through the heart of Cent if you’d prefer to explore a bit first. Either way, once you arrive at Dover Fortress, use your raven to scout the general area where you’ll find the emissary. This should be the western part of the fortress, near the entrance. You’ll need to enter the fortress and use Odin’s Sight as you wander through it, to highlight the exact location of the emissary.

The site of Dover Fortress (and later castle) contains evidence of potential defensive fortifications from earlier in the Iron Age, before the Roman invasion of c. 43 AD. This would make it an important strategic position for the defence of the British isles for nearly 2,000 years, lending some credence to it being referred to as the “Key to England”.

Once you have identified the emissary, you can try to steal the message by approaching them from behind, but this can be difficult with all the guards nearby. It will depend on your luck in terms of where the emissary is located within the western part of the fortress, as this will be random. You can just as easily assassinate the emissary and loot them, then run from the alerted guards. Or you can stay and kill all the guards if you really want to. When you have the letter, the quest will complete. 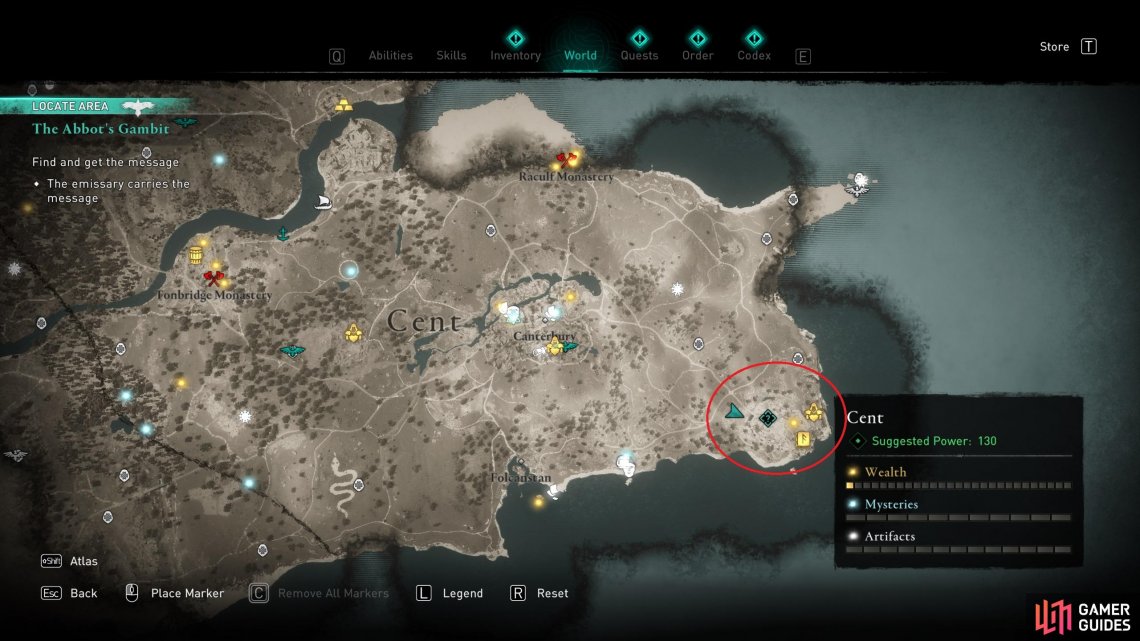 (1 of 3) The location of Dover Fortress, in the southeast of Cent.