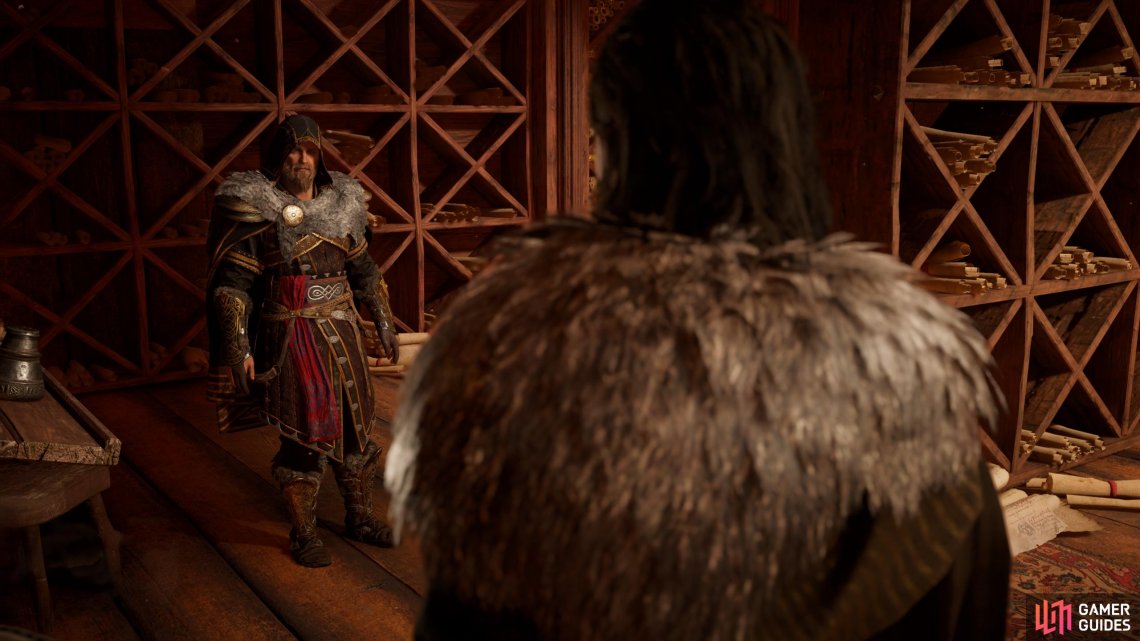 This quest begins once you have pledged to Wincestre from the alliance map at the longhouse in Ravensthorpe. To begin, you’ll need to travel to Wincestre, which is far to the southwest of Ravensthorpe. When you arrive, you’ll find the man in white at The Old Minster.

Speak with the Man in White at The Old Minster¶

Once you speak with the man in white, he will ask you to prove that you’re the person he summoned. You can do this by responding with a dialogue option if you have at least 4 Charisma. Otherwise, you’ll need to ask him about where you can learn of the Christian deeds. After this, you can use Odin’s Sight to highlight three nearby texts, each of which are relevant to the answers you’ll need to provide the man in white. Once you have read all three texts (all of which can be found within the minster), return to the man and take note of the following:

Following the pattern established above, respond to the priest in the following order:

Whichever way you do it, once you have convinced the priest he will ask you to follow him. He will lead you to a room upstairs, which you should enter by opening the door. Once inside, you’ll meet a mysterious figure who turns out to be Aelfred the Great. You can respond in whatever way you see fit here. After the conversation, you’ll have a few clues given to you by Aelfred regarding the identity of The Quill, The Gallows, and The Seax Order of Ancients members. You should now make your way to Goodwin’s House in the northwest of Wincestre. 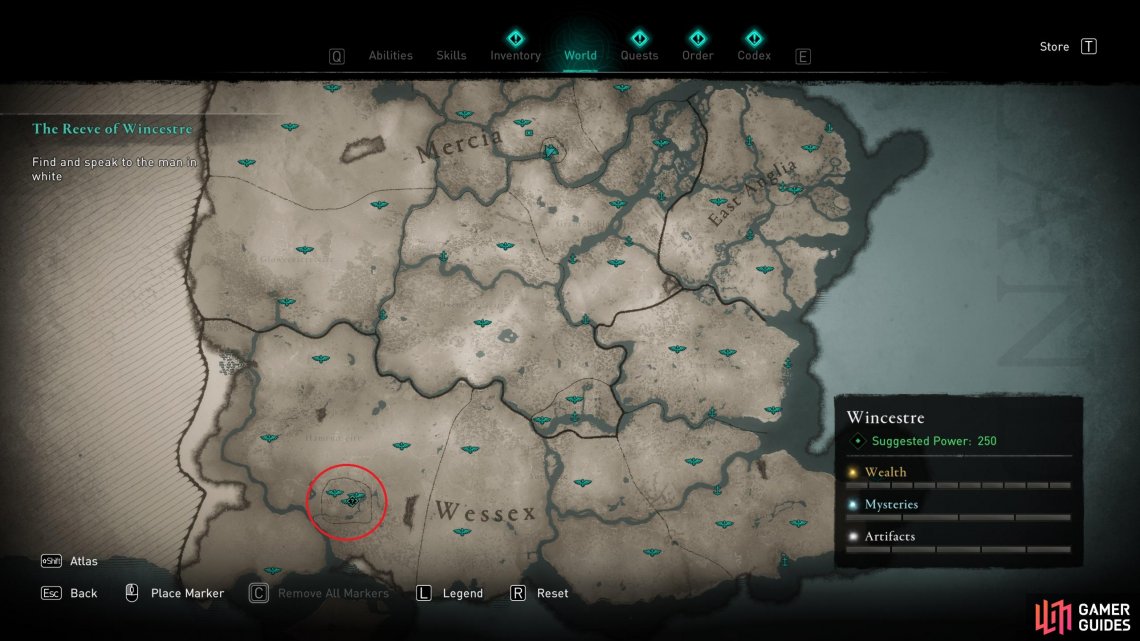 (1 of 6) You’ll find Wincestre far to the southwest of Ravensthorpe.

When you arrive at Goodwin’s House, you’ll find numerous guards outside. You’ll need to be careful and enter from the back of the house to reach the courtyard. Here you’ll find two guards which you can assassinate before entering the house. Once inside, you’ll need to examine evidence in the form of a half-burned letter on the ground floor, and some broken bowls upstairs. After examining these the quest objective will update. You now need to enter Wincestre Garrison to rescue Goodwin. You’ll find it to the south of his house. 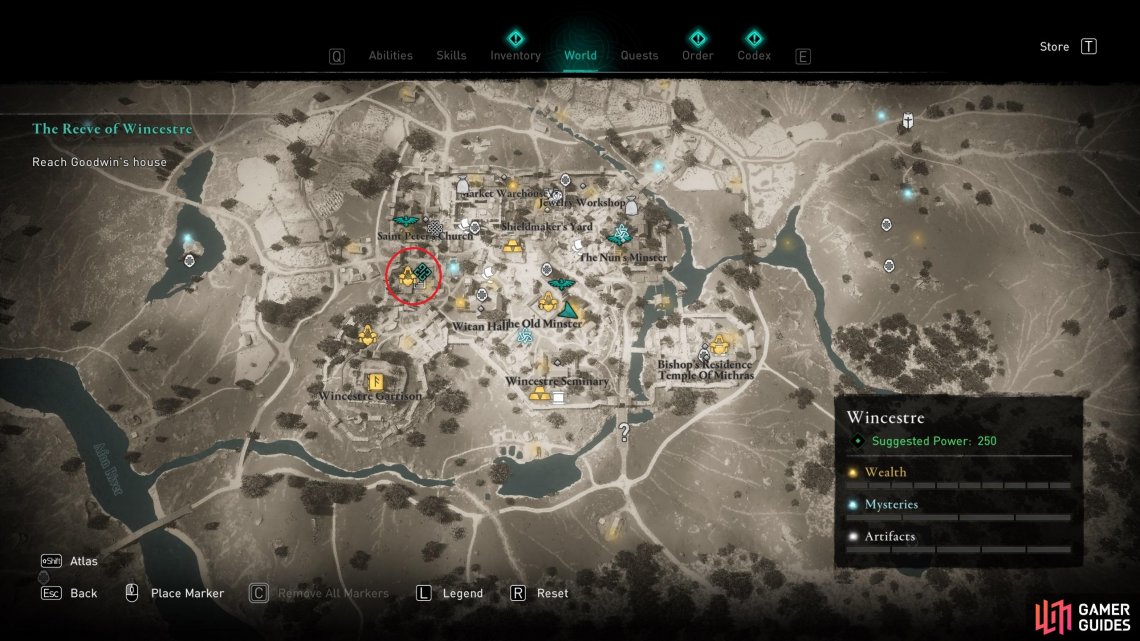 (1 of 3) The location of Goodwin’s House, northwest of The Old Minster.

As you approach the garrison, keep your cloak on if you want to remain in stealth. You’ll find numerous soldiers throughout the area, so you’ll need to be careful to avoid them. Your best chance of remaining undetected will be by keeping to the walls on the northwestern side of the garrison. Here you can assassinate guards on the battlements as you make your way to a nearby building which contains a key that you’ll need to proceed. You should find the building with the key easily by using Odin’s Sight to highlight it.

Given the number of guards you may find it difficult to avoid being detected, but so long as you kill any guards with a bell above their head, you will only alert guards in the immediate vicinity. If you want to be sure that the entire garrison won’t be alerted to your presence, be sure to locate the bell towers and shoot the bells to disable them. Once you have the key to the inner garrison, use it to open the door and proceed to the innermost garrison building. You’ll find a note on the top floor containing details of a planned execution, and you’ll find Goodwin in the middle cell at the bottom of the garrison.

Once you’ve freed Goodwin you’ll need to find some documents on the middle floor of the garrison building. All doors leading to this floor are barred, but you can open them by shooting through the slits in the walls from either the eastern or western sides, aiming at the locks to the door on the other side. If you’re having trouble identifying them, use Odin’s Sight to highlight them in red. Once you’ve shot at least one lock you can climb to the other side of the building and enter through the door. Once inside you’ll find a Book of Knowledge which grants the Axe Blizzard ability, along with Goodwin’s research documents on the table nearby. 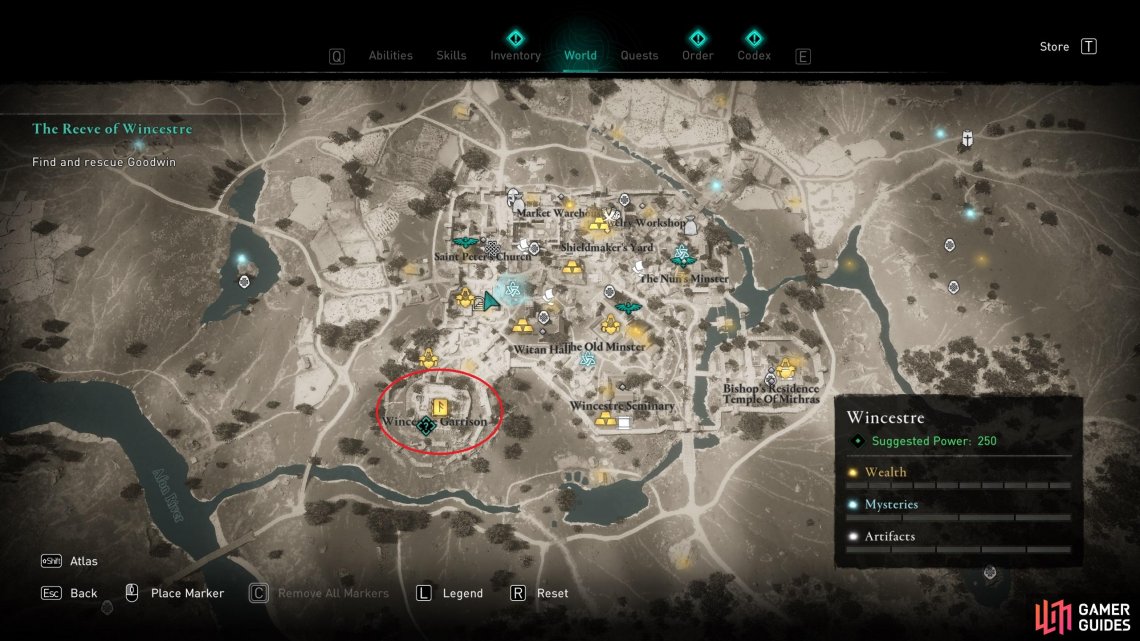 (1 of 7) You’ll find Wincestre Garrison in the southwest of Wincestre.

With the documents in hand you should now return them to Goodwin, who can be found outside a house to the northeast. You’ll have a few dialogue options when you speak with him, each one discussing potential members of the Order of Ancients, including Reeve Selwyn as The Gallows. After the cutscene, the quest will end.