Leofrith is known for his prowess in battle, and it certainly shows in this fight. However, there is one skill which will make this fight much easier: Brush With Death. This skill will allow time to slow for a few brief moments each time you dodge an attack. If you get the timing right with this, you can bring Leofrith down slowly but surely by retaliating with a few swift light attacks each time you dodge one of his attacks. The main thing you will need to look out for is the reach of his longsword. Try to get a feel for the timing of when you should dodge an attack by practicing a few times at the beginning of the fight before you go in for the attack. 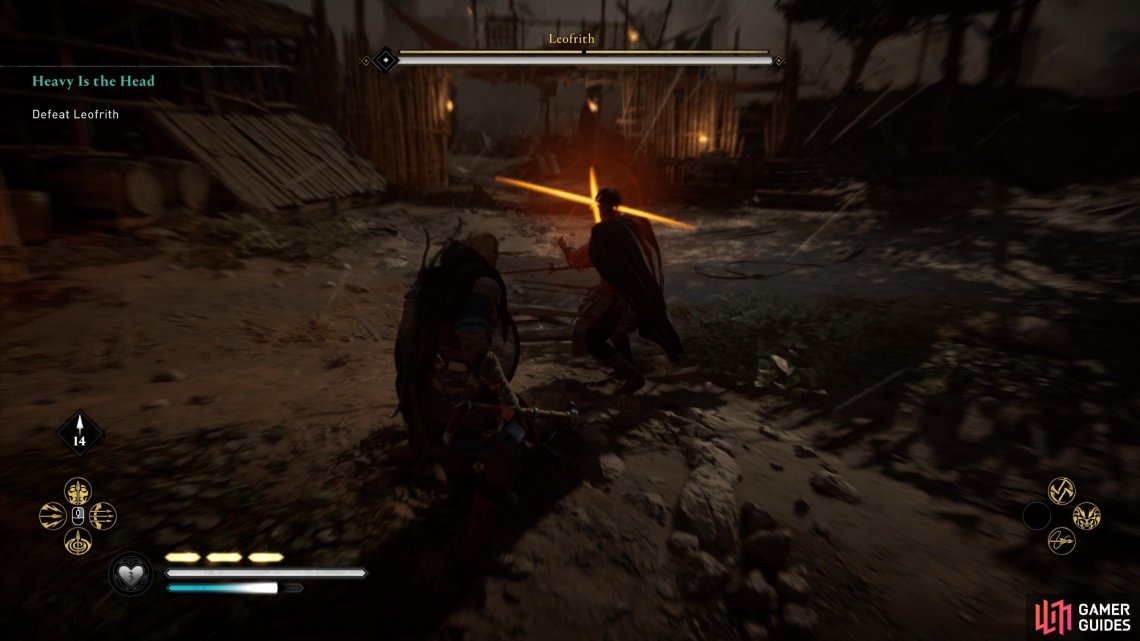 (1 of 4) Pay attention to Leofrith when he draws near. A quick dodge will allow you to avoid most of his attacks.

Although Leofrith will spam a basic attack that can easily be parried, he will often follow this up with one or two more swift attacks. Keep an eye out for the yellow animation, indicating an incoming attack, and be ready to dodge them consecutively if necessary. If you’d rather take Leofrith down as quickly as possible, you can risk a few shots at his weak points. These are located on his right ankle and left forearm. Create some distance between Eivor and Leofrith before you try shooting these weak points, lest you be exposed to powerful melee blows. However, keep in mind that when you create enough distance, Leofrith will sometimes charge a special attack, which results in him charging you with a heavy attack that can’t be parried.

Most of Leofrith’s special abilities can be interrupted by shooting him in his weak points: the right ankle and the left forearm.

The most effective way to overcome this is by performing a roll. A quick dodge will not be enough to avoid the full swing of Leofrith’s sword. Another one of his special abilities is indicated by a blue flash of light, followed by him assuming a battle stance in which he holds his sword with the tip facing the ground. If you attempt to charge him while he’s holding this stance, Leofrith will easily parry your attack and retaliate with one of his own. Instead, try to shoot Leofrith in his weak points to expose him to a stun attack. This special attack will land successfully every time, and will inflict massive damage.

Follow the above steps, either by targeting Leofrith’s weak points and instigating stun attacks, or dodging his spam attacks and retaliating with your own, to bring him down without putting yourself in too much danger.

When the fight with Leofrith is won, a vision with Odin will ensue. During this vision Odin will attempt to convince you to kill Leofrith, securing him a glorious death. However, suggests that allowing him to live will ensure that he can learn the truth about Burgred. We recommend that you follow Eivor’s instincts and allow Leofrith to live, to get the most out of the story.

If you choose to spare Leofrith, he will inform you of a scroll located in Venonis, a scroll with your name on it. If the zealots find this scroll, they will hunt you down relentlessly. It is therefore imperative that you find the scroll and burn it as soon as possible. You have one day (in game) from the end of this quest to burn the parchment.