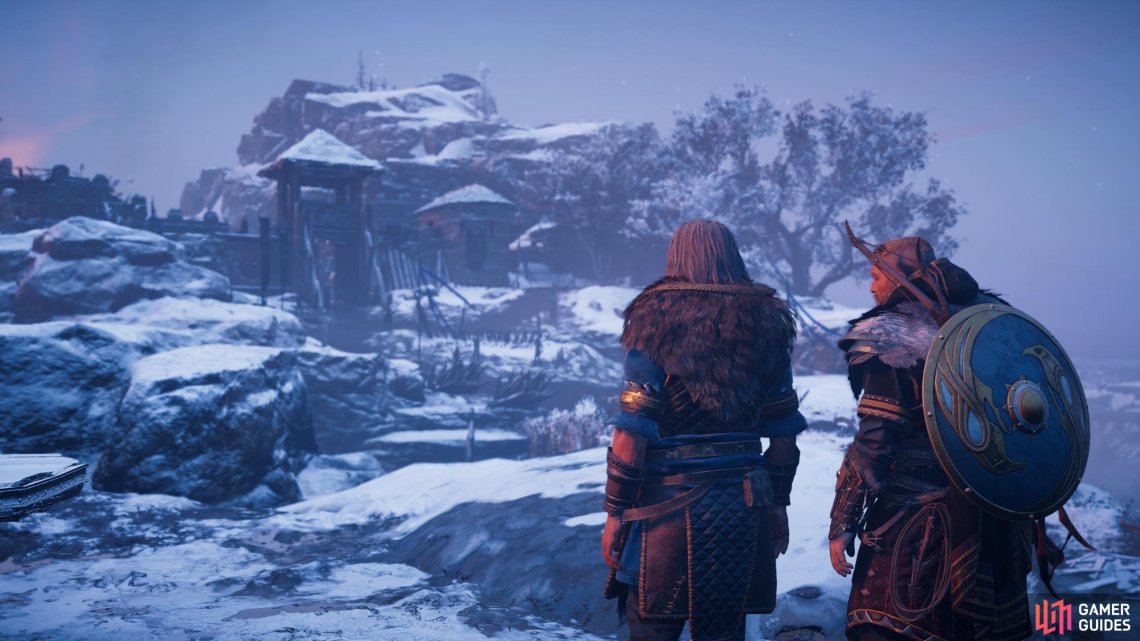 You’ll find the envoy in the cave system within Snotingham. Look for Trygve at the back of the cave system and speak with him. If you have any trouble locating Trygve, use Odin’s Sight to highlight him. A number of dialogue options will be presented, but you can choose whatever you want. After the conversation follow Trygve to the docks in the west of Snotingham. Once there, use the quick actions wheel to call your longship. When you enter, Trygve will follow, and you can sail west through the river system. 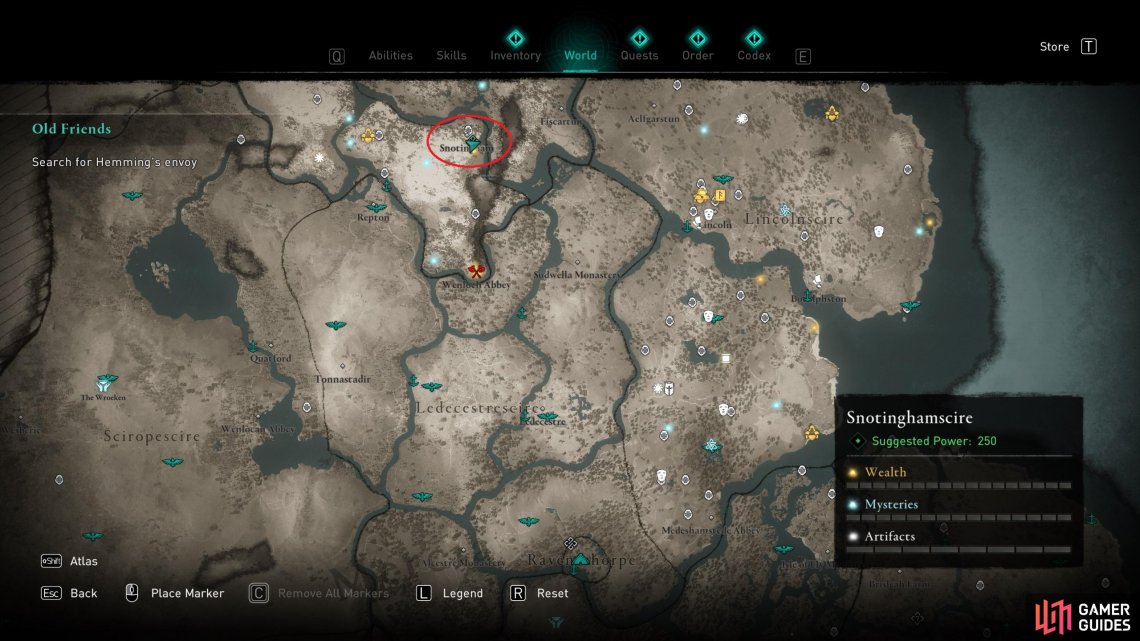 (1 of 2) You’ll find Snotingham far to the north of Ravensthorpe, circled here in red. 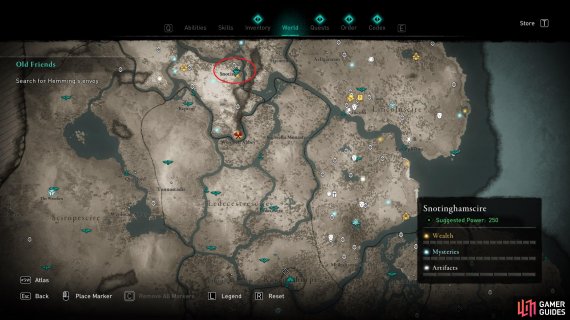 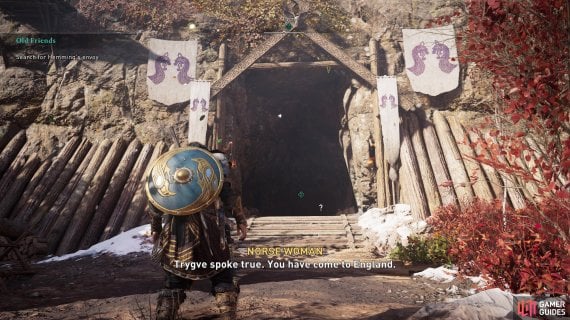 As you sail toward the checkpoint on the shore to the west, you’ll be ambushed by Picts from the northern and southern shores. You can choose to leave your longship and fight them in melee if you prefer, but you can just as easily take them out with your bow. Your arrow supply won’t be depleted so long as you fire from the longship, so you can use as many arrows as you need to. You’ll find plenty of fire pots along the shore next to the Picts, so be sure to shoot them to kill a number of Picts at the same time. As you sail, weak wooden river blockades will appear in the water. You can smash through these with your longship, or simply sail around them.

When you reach the objective marker at the western shore, you’ll have to wait for the rest of the convoy (the small row boats) to arrive before you can proceed. When they finally reach the shore, the quest will update and Trygve will ask you to go on ahead to meet with Hemming Jarl at the Tip of the Spear to the northwest. Speak with Hamming Jarl in the camp there, and respond to his dialogue prompts in whatever way you want. During the scene you’ll be introduced to Vili. Again, it doesn’t matter what dialogue you choose here. 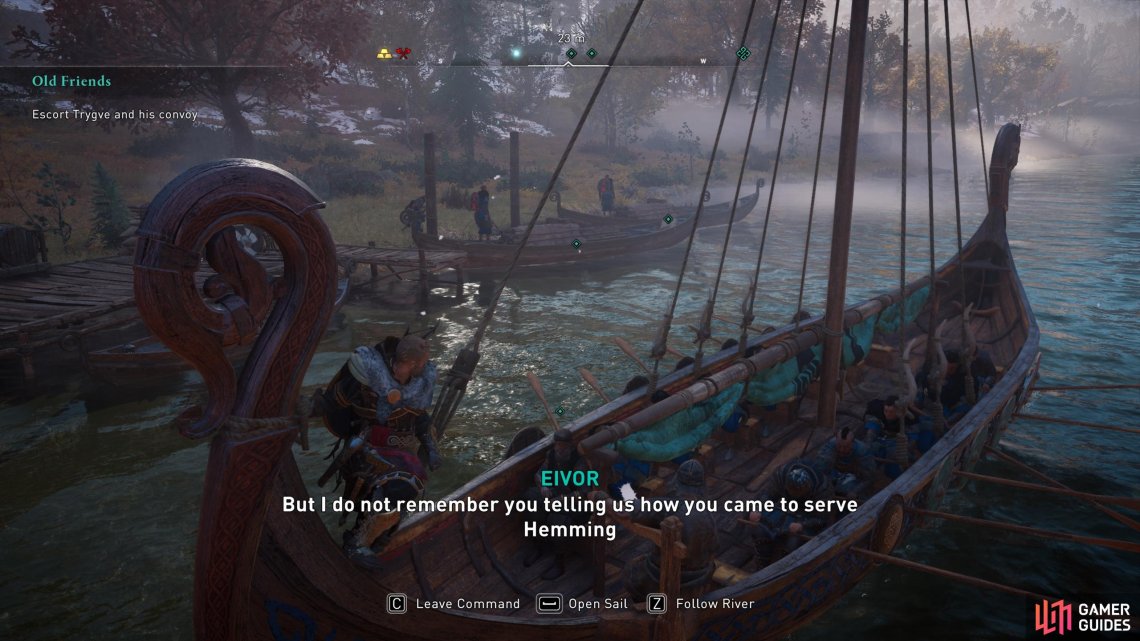 (1 of 5) Summon your longship at the Snotingham docks and escort the convoy.

At the end of the scene, you’ll begin the assault on Ulkerthorpe Fort. This isn’t a structured ordeal like most other stronghold assaults. Instead, you just need to kill all the enemies in sight, and in particular the Pict chief, who can be found in the tower. Most of the units on the way to the tower will be easy to defeat, with the only potential problems coming from Wolf Master’s and Madmen. Both of these utilize fire in their attacks, which you’ll need to avoid with dodges and rolls. At the same time you’ll encounter the odd Brigand, who frequently throw dirt in your face to obscure vision. Kill these as quickly as possible to avoid being caught off guard while blinded.

You’ll find that both Wolf Masters and Madman enemies will retaliate with fire attacks if you spam too many light attacks at once. To catch them off guard and finish them in one flurry of attacks, use a few light attacks first (2-3) and follow them up with two heavy attacks. The heavy attacks will interrupt any incoming retaliatory blows.

When you reach the tower, you can enter it and climb the stairs inside to the top. However, at the stairs will only go so far, and you’ll end up having to climb the walls to the top of the tower, so you can take any route there that you prefer. Once you’re at the top, you’ll find the Pict chief, Gede. He is more of an elite unit than a boss, so you shouldn’t have much trouble in killing him. His skillset is similar to that of a Macbeth elite unit. He uses a spear with a long reach but few special abilities, other than at the end of the fight. When Gede’s health is low, he’ll drink a potion which will slowly kill him, but increase his combat effectiveness at the same time. You can simply kite Gede at this point until he falls if you don’t want to risk close combat. 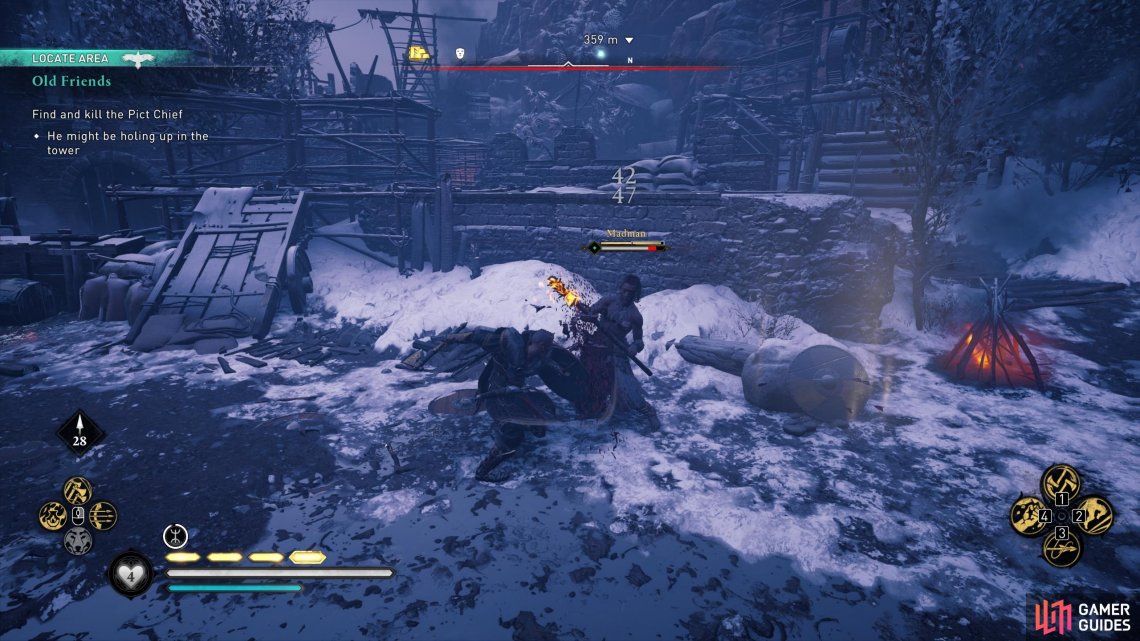 Once you’ve killed Gede, a cutscene will begin with Hemming. It doesn’t matter what you say here, so go with whatever feels best to you. After the scene, the quest will complete.